Baldwin’s “Sonny’s Blues”
Suffering, the Blues, and our (in)ability to listen. 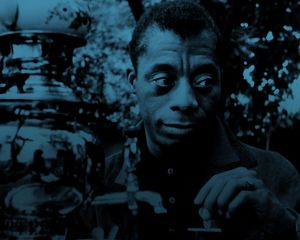 The narrator of James Baldwin’s “Sonny’s Blues,” like many of us, needs to learn how to listen. How many of us truly listen? Or do we just wait for someone we might be talking to to shut the hell up so we can continue our verbal assault without the slightest consideration as to what she might have to say? How often do we find ourselves thinking about what we’re going to next pull out of our word hoards rather than attempting to hear what someone else might have to say? Perhaps others are just as guilty. Maybe they need to listen to what I have to say. It would probably do them good, no? Yet, so often we are made deaf by our own beliefs that the tune someone else whistles sounds too dissonant for us to enjoy.

Indeed, much of what we’re taught probably reflects the music we find most pleasing. How many of us whites have actually tried to listen to rap before we decide we hate it? Name three jazz greats. Can you do it? You can probably name five country radio stations (at least if you live around here), but you’d probably be hard-pressed to come up with one classical station that’s not NPR. And that’s assuming that they even exist. Do we not know how to listen because what we have to hear is all the same? If all you ever hear on the radio or the teevee is about how wonderful it is to rustle cattle, pop a cap in someone’s ass, or how I will alllllwwwwwaaaaaaaays love you, then maybe we begin to believe those things so much, that anything else might sound like noise.

The narrator of “Sonny’s Blues” is the same way. He relies on what works for him and applies it to Sonny, even though the latter seems to be nothing like his brother. The narrator is a math teacher, and like most teachers he believes in a sense of order and discipline that can allow for the youth to escape the caveats of their lives, like sloth, drugs, and crime. This mission seems particularly important for the nameless narrator, since he sees daily how young blacks in Harlem fail to rise above their environment, “the way kids can, so quick, so quick, especially in Harlem.”[1] Their surroundings, from the narrator’s perspective, limited their perspectives as it seemed to always have:

The narrator had escaped and made something of himself, and he desperately wanted his brother to do the same. However, what worked for the narrator would not work for Sonny.

When Sonny tells about his love for jazz, his brother reacts much the same way many of us would, with disdain. Yet, while our concern may be more pragmatic (you’ll never make any money at that!), the narrator’s was based on what he saw as the reality of musicians: people who were not serious about life. He thinks: “It seemed—beneath him, somehow. I had never thought about it before, had never been forced to, but I suppose I had always put jazz musicians in the class with what Daddy called “good-time people.”[2] Also, the music made no sense to him; it “seemed to be merely an excuse for the life he led. It sounded just that weird and disordered.”[3] College, family, and career gave the narrator’s life order, and he wished that for Sonny, too. It seems the narrator acts in good faith, but he still does not begin to hear Sonny until the latter is arrested for “peddling and using heroin.”[1]

Sonny later tries to tell the narrator that heroin does for him what algebra does for the narrator: “It makes you feel—in control. Sometimes you’ve got to have that feeling.”[4] It alleviates the suffering of life, if only for a time, and seems to give life reason and direction—a purpose. However, this reason, Sonny learns will lead to death, so a new way to find meaning and order in life must be found. In order to escape the suffering, you have to listen: “You can’t talk it and you can’t make love with it, and when you finally try to get with it and play it, you realize nobody’s listening. So you’ve got to listen. You got to find a way to listen.”[5] It seems, too, that Sonny’s descent has allowed him to touch something he might not otherwise have achieved as a jazz musician. Apparently, suffering is the key to beauty: Sonny comments on a street singer, “it struck me all of a sudden how much suffering she must have had to go through—to sing like that. It’s repulsive to think you have to suffer that much.”[5]

Blues, then, seems to become a scapegoat: those musicians suffer so we don’t have to, yet the tragic thing is that many of us don’t listen. However, the narrator finally hears his brother play: “They were not about anything very new. He and his and his boys up there were keeping it new, at the risk of ruin, destruction, madness, and death, in order to find new ways to make us listen.”[6] The suffering of the past is all contained in the blues, and the suffering will continue unless we can learn to listen to what’s being communicated by the most profound victims of that suffering: “Freedom lurked around us and I understood, at last, that he could help us to be free if we would listen, that he would never be free until we did.”[7] To listen is not only polite, “Sonny’s Blues” seems to suggest that it is the only ethical thing we can do—we owe it to each other, not to oppress them with our talk, but to shut the hell up and just listen. The Bird calls…