Some Thoughts on Health Care
[An excerpt from a Facebook discussion.]

There needs to be an affordable public option. Period. It should focus on preventative care, education on nutrition, premium incentives for exercise and body weight, and incentives for states to build parks, bike lanes, and exercise facilities. The health care discussion and reform needs to be about health. There’s no reason, other than fear, greed, and ignorance, why we can’t have the best health care system in the world. 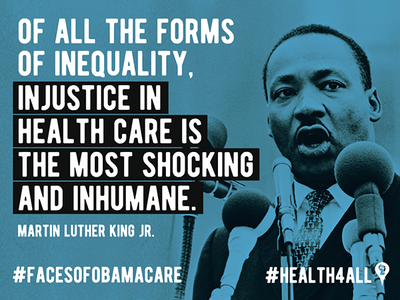 As far as letting the markets work: I can’t believe anyone can say that with a straight face these days. We are a bunch of greedy bastards; we have shown time and again that we love money much more that the welfare of our brothers and sisters. Why are we the only country (in my knowledge) that thinks it’s OK to profit from people’s sickness? In fact, wouldn’t a public option stimulate competition? I agree that the bloated insurance companies would have to tighten their belts a bit to compete, but isn’t that what a free market is? And, frankly, don’t we all need to tighten our belts? We’ve been forced to economically, why not nutritionally?

It sounds to me like the Republicans define “free market” in a way that tries to leave out the interests of the consumer in favor of supporting the corporation. For example: cell phone companies suck. All of them. I’m not talking about the service, though AT&T’s leaves much to be desired, but the ridiculous contracts that all of them make me sign. Two years!? So, in order to use my iPhone, I have to be locked into a contract for two freakin’ years? Wouldn’t real competition be better service for less money? Their “free market” benefits the companies while taking away my freedom.

The market thrives on greed and ignorance. I’m not an economist, but I do live in the real world. Every time I have to deal with my insurance company it’s a pain in the ass, at best, and a nightmare, at worst. I, like most insured Americans, pay them a considerable amount of my paycheck for premiums which will be increasing again at the start of the year. Why? So they can deny me what I need when I need it? I’m thinking about ditching insurance all together. When I get sick, I’ll just do what the uninsured do now: go to the emergency room and let everyone else’s taxes pay for it.

(Frankly, I don’t see why the wealthy are threatened by health care reform. Money’s always gonna get you the best of the best. I wouldn’t sweat it. This debate is for us peasants, you know us “huddled masses yearning to breathe free.” The problem is that some of the wealthy have big mouths and intentionally deceive the the ignorant and gullible. More about Fox “News” in a second.) 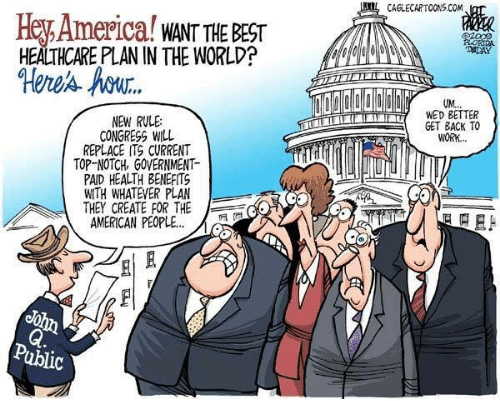 Yes, we already have a form of socialized (I know, that’s a scary word) medicine now; we just don’t have any of the benefits. Doesn’t it make sense to pay for preventative care, including education? I saw Michael Moore on Leno that other night, and Jay mentioned that Michael lost some weight. The latter made a comment about being in Venice recently and that the food is bad because it’s filled with carbs. Maybe his next documentary needs to be about food myths (here’s another link).

Yes, I would rather pay more in taxes to be assured of getting coverage when I need it. We should also tax that which makes us unhealthy, like junk food – fat and processed foods. I think part of this is to educate people about health: that unprocessed carbs are good for you and fat is bad. I’m tired of hearing this misinformation. Folks, read a book about health and nutrition.

On a related thought: I think we need to take more of a hard line (or is that “fair and balanced”?) against the fearmongers and the right-wing radical nut-jobs like Fox “News” and certain bigots in the US Congress. They have begun a religion based on fear, greed, and ignorance. Their followers are as devout as they are misinformed. They refuse to listen to any reason or contrary claims, like the evangelicals. They encourage belligerence and bombast while eschewing discourse and fair representation. They are ready to sermonize anywhere, angerly showing their outrage if someone doesn’t agree with them. This is not healthy. Yes, I support freedom of speech, but I also support the notion that we must be responsible for what we say, too. More people need to take these guys to task for the poison and vitriol they spread. Maybe Bill Maher is right: that we need to get in touch with our inner assholes.

I think the Dems need to grow a pair and get this thing done, without the Reps. Or maybe if we took away Congress’ health care and retirement (it’s a sweet package, despite some misinformation), they would have a bit more incentive to actually do something if their sorry asses were on the line.