My first field trip was with my London as Text class, and we visited the Museum of London. I don’t know about you, but I get museum fatigue after a few hours—usually around three. And three hours was just enough time to take in the Museum of London. In fact, check out my students’ blogs: they will be writing on all their field trips. I think my favorite part was the display on Roman London, thought their featured exhibit about the fire was also cool.

After the museum, my students did their own thing, and since it was such a perfect day, I went back and grabbed the camera and headed for Westminster. I started my walk at Leicester Square and stopped for some photos in Trafalgar. The sunny, warm day seemed to bring everyone outside and many of them lounged around the fountains in front of the National Gallery. I made my way through St. James Park to Buckingham, then over to Parliament and Westminster Abbey. It seemed like half of London followed me, but who could blame them on such a balmy summer day? 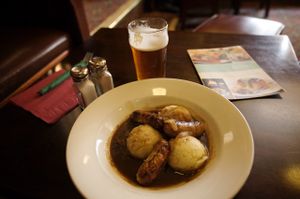 I also had the best lunch meal of my travels yet. It was bangers and mash at a pub called The Chandos right near the National Gallery. I took my students to Westminster Abbey, and then let them lunch on their own.

I probably did this because I wanted to go to the pub. I saw a sign out front: “Traditional English Pub Food,” or something like that, so I decided to give it a try.

Not only was it the best food I’ve had thus far in both London and Paris, but it was the cheapest. A pint of bitter and my lunch only cost me £6.40! Yes. I know it’s not my usual vegetarian fare, but I had a craving.