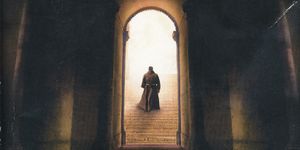 It took me a month. Perhaps longer. However, I finally finished Neal Stephenson’s Anathem.

It was not my favorite book. I’m not even sure I'd recommend it to anyone who wasn’t already a Stephenson enthusiast. I’d probably say: “Read Snow Crash, or The Diamond Age." The former is a brilliant, fast-moving, and smart book—perhaps the most important work of cyberpunk next to Gibson’s Neuromancer.

Yet, I’m sad it’s over. I think this sentiment has more to do with long books. There’s something about a 1000-page novel that really brings me into it—in a way that no 200-pager can. It probably has something to do with the detail, but perhaps more with the commitment it takes to read it. Other books that I have felt the same way after finishing are: Dostoyevsky’s The Brothers Karamazov, Tolstoy’s War and Peace, Herbert’s Dune (though it wasn’t particularly long), Brook’s original Shannara Trilogy (particularly Sword and Elfstones), any of Donaldson’s fantasy, like the Thomas Covenant books or the dream mirror ones). Yes, a long series can leave me with the same feeling. Perhaps this feeling has something to do with the popularity of the Harry Potter novels?

Still, I don’t think I’d want to reduce Anathem to the likes of Harry Potter. It is a very strong novel that deals with politics, religion, technology, academics, history, devotion, space travel, and quantum mechanics. I'm glad I spent the holiday with this novel, though it would have been nice to have gotten in another read or two.