Yesterday, I made the trek to Milledgeville, GA, for our second meeting of the faculty in the European Council’s study abroad programs. Faculty from all the programs were present, including the ten or so going with me to London. The day was beautiful, so I grabbed the camera and hopped on the freshly cleaned BMW for the 45-minute ride over. 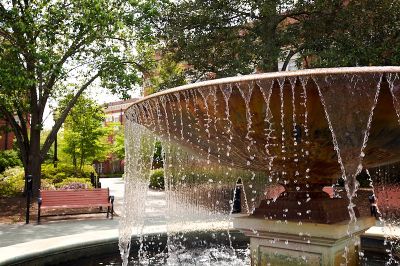 The meeting was in the Arts & Sciences building on the GCSU campus. I had been to Milledgeville before, but haven’t really explored the beautiful, but small, campus. It is full of southern charm — nicely landscaped and intimate. The meeting went well, and my London colleagues and I had lunch at a cool restaurant downtown called The Brick. I had a shrimp po’boy (wishing I was still in New Orleans, I guess) which was pretty darn tasty.

After lunch we went over a couple of logistical matters for London. It appears that the tickets have been purchased, so the fact that I’ll be in London in two months (from today, actually) is becoming more real for me. I have to finish my syllabi before next month’s meeting with the students, and I still don’t have a clear idea about my London as Text course. I better figure it out soon.

The ride home from Milledgeville was beautiful, and not as brisk as the ride out. It feels good to be back on the bike.