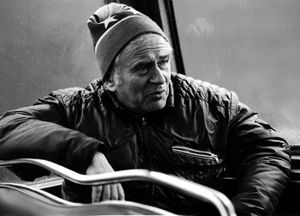 The irony of blending the study of Norman Mailer with the classroom in the cloud is not lost on me. My initial experiences with Mailer and his work included his statements that vilified and condemned computers as “the most advanced, extreme, and brilliant creation of the Devil.”[1] As I would learn, this position had been consistent throughout Mailer’s career, yet Mailer was never one disregard the potential advantages of the Devil. In a 2007 interview in Rolling Stone, Mailer was asked if he ever used a computer, and he responded: “I use it indirectly. My wife uses one, and my assistant, so I get the benefits without having to pay the price.”[2]

Mailer introduces the PBS documentary “Mailer on Mailer” with a similar statement about television:

Like television, Mailer uses the computer when it is to his advantage. However, there is the caveat: Mailer’s use of a technology does not mitigate his critical eye about it. He might use a computer or television—both technologies culturally less profound and important than the book—for his own ends, but he would also let the public know of their potential deleterious effects. In a similar vein, Marshall McLuhan—one of Mailer’s old sparing buddies—warned about the dangers of a transparent technology to “impose its own assumptions on the unwary.”[3] In this way, Mailer, McLuhan, and I agree. Teaching with technology allows me to both use it for its advantages and critique it at the same time.

My approach to Norman Mailer would be through a senior-level course in my college’s catalog called “Studies in Culture”: a humanities course that allows the examination of a selected topic from a historical perspective. A cultural studies course expands the topic’s purview to include texts beyond Mailer’s literary work—like journalism, biography, films—but within a certain time and place. I wanted to at least touch on Mailer’s entire career, emphasizing Bufithis’ “literary outlaw,” Lennon’s novelist-journalist-historian, and Bloom’s courter of “danger, disaster, and even scandal.”[4] The course would consider the cybernetic loop of Norman Mailer writing “America,” while America made it’s mark on “Norman Mailer.” The course would be about representation: the man himself, “Norman Mailer,” in Bloom’s words, the “supreme fiction,” and the many facets of “America” reflected in his work.[5] His America was the one after World War II, a nation at war with itself, struggling to write its own identity, the “shits” in one corner, the “white negroes” in the other.

My emphasis would be a view of “America” through the filter of some of Norman Mailer’s work. This approach would allow me to select specific texts, but give the students the latitude to explore whatever issues they found interesting within those texts. I chose texts that I was interested in exploring further, many from Mailer’s earlier career: Advertisements for Myself—including “The White Negro” and “The Time of Her Time”—An American Dream, The Armies of the Night, Maidstone, The Executioner’s Song, On God, and others. I wanted a variety of genres that reflected Mailer’s complicated relationship with his country at particular historical moments.

Check out my syllabus for HUMN 4472: Norman Mailer’s “America” (#MailerClass) on LitMUSE. The traditional class mechanics, which I will not delve into here, maybe found on the syllabus. Many of the discussions linked under the schedule show my use of Twitter and Disqus in daily work.

The class would emphasize intertextuality, participation, and collaboration. This would be our exploration of “Norman Mailer’s ‘America’” which was also located in a particular place and time. I was excited to answer Sipiora’s call, but I kept wondering how students from a small, liberal arts college in central Georgia at the beginning of 2013 react to the works of Norman Mailer and an America they never experienced? While planning the course, I talked to several colleagues, most of whom thought my choice to teach Norman Mailer in general and The Executioner’s Song in particular exposed me as a special form of crazy. “Jerry, The Executioner’s Song is over a thousand pages, isn’t it? They won’t read it.” Indeed, with multitasking brains and endless media distractions, teaching this titan of American letters would hold its challenges.[6] While computer technologies may be rewiring our brains, I find arguments like this to be little more than knee-jerk reactions, akin to “texting is ruining the English language” and “violent video games cause violence in real life.” While there might seem to be some logical connections, perhaps it’s the way we approach these ideas that’s flawed. Kind of like teaching itself.

Norman Mailer’s “America” would combine some traditional methods with what I think are digitally progressive classroom-in-the-cloud approaches. The course would be held in a traditional face-to-face classroom, meet twice a week, read and analyze texts, discuss aspects of the reading in class, and utilize familiar evaluative measures, like exams and essays. However, to bring the course into the cloud, I decided to call on a technology that seems to be as common today as the car: the smartphone.

Part of the challenge as I saw it was that my students were products of the educational system that Mitra and Nelson critique. How would I get students to reverse their expectations of what a traditional classroom has always been for them: a relatively passive experience where their roles as students was dictated by the very medium of the classroom? In order to break the walls of the classroom to let in a bit of the sky, I thought the smartphone would do the trick, since most of my students have them anyway—something I could not count on in the relatively recent past. I wanted each student to have a device (what theorists call “1:1 Technology”) to be responsible for individual work and to participate in online discussions. For those who didn’t have their own device, the department would supply them with an iPad to use of the semester. Out of twenty students, only one, non-traditional student asked for a departmental device.

The parts of #MailerClass that bring it into the cloud are my devices policy, social media, and classroom approaches that rely on the former two. The next step was to get them use their devices in class, something I thought would not be an issue.