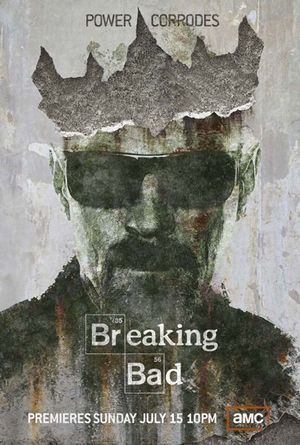 Breaking Bad creator Vince Gilligan has stated many times that he intended Walter White’s transformation from father and high school teacher to meth cook and drug kingpin to be like the change from Mr. Chips to Scarface.[1] In the show’s first episode, Walter White is diagnosed with terminal lung cancer, beginning his existential crisis as he moves toward death and away from the systems of order that had always directed his life. His cancer provides the catalyst for his transformation, both freeing him from the soul-destroying mundanity of his life, but not without making him a metaphorical cancer for his family, friends, and community.

This paper will consider Walter White as a post-9/11 Mailerian hipster, developed in “The White Negro” (1957). It will consider cancer as a complex metaphor for contemporary American life, as a symptom of American existential crises, and the catalyst for White’s “psychically armed rebellion”[2] in reaction to the “impossibility of the American Dream.” White’s lung cancer forces him to live in a new way; it allows him to embrace a madness that he never otherwise would have considered: death has opened up new possibilities for life. However, while his new “Hipster morality” brings him a new courage and pleasure, it becomes a figurative cancer for those closest to him.

Norman Mailer discusses 9/11’s psychic “reverberations . . . on American Life” in Why Are We at War?.[3] He argues that the senselessness of terrorism disrupts the “logic” or meaning in death resulting in an existential crisis in identity for America. I can help but see a parallel between this observation about life in America after 9/11 and the one that begins “The White Negro” in 1957. The essay opens in the “psychic havoc” of the aftermath of World War II in which we might “be doomed to die like a cipher” in a similar holocaust precipitated by the pinnacle of human technology: the atom bomb.

Why Are We at War? and “The White Negro” are separated by almost fifty years, but the essays share similar concerns revolving around the potential and actual consequences of technology on the literal and psychological landscape of America. It’s these new “terms of death” that precipitate an existential reorientation to the imminent possibility of a senseless demise likely caused en masse by by some product of science. Both war and terrorism are more effective through high-tech. If, as Mailer states, “Terrorism’s ultimate tendency is to make life absurd,” then technology only augments the absurdity.[4]

Perhaps this is the result of a post-war age? Maybe compounding the attack on 9/11 is a post-cold-war ennui that desires conflict, or something akin to naming and killing the enemy as a atavistic raison d’être. Still, Mailer identifies psychoanalysis as the accepted means for dealing with the “psychic havoc” wrought by WWII. Psychoanalysis’ goal, Mailer explains, is to make everyone conform to standard modes of behavior by promoting the neuroses of adult life. This sublimation of dread also manages to eschew passion and desire — creating squares who seek to grow but fail to find anything but malaise by conforming to social norms. He contrasts this to the “philosophical psychopath”: one who seeks to grow through the “morality of the bottom,” or a search for immediate gratification in the “infantile fantasy” that seeks the “apocalyptic orgasm.” Each approach, Mailer observes, seeks a solution to this psychic havoc, yet one does so through conforming and the other does so through compulsion, desire, and the pursuit of “future power . . . beyond the civilized man.”[5]

Mike Lennon shows Robert Lidner’s and Wilhelm Reich’s influence here. The latter argues that the “alternative to adjustment is rebellion” and that a way must be found to “unbind the Prometheus within each one of us.” Reich supplies what this rebellion seeks: a freedom from the neuroses that inhibit the “sexual life of civilized man” to become “orgiastically potent.”[6] Sin is not the end, but a catharsis that that purges the repression of the past to allow for the creation of a new nervous system.[7]

White is driven by what he claims is a desire to take care of his family — Skylar and Walter Jr. — when he is gone. In essence, he is driven by the reality of his body’s decline because of the fact of his disease, to pursue a course not sanctioned as legal. Like the psychic residue of the atom bomb, concentration camps, terrorism, White in many ways says fuck it to a lifestyle the made him neurotic and subdued, and embraced one of out of necessity — one that would allow him more control and the ability to assert his creativity and genius.

In Mailer’s terms, arguably, White has become the “philosophical psychopath” — the American existentialist — the “white negro” — the Hipster who necessarily must embrace the “dangerous imperatives of psychopathy” because of his death sentence. His acceptance of the “terms of death” that the series begins with — representing the post-9/11 cancer of terrorism on the American psyche — casts off the identity of neurosis (the teacher, the father, the husband, the citizen) to create a “new nervous system free of the past” that his current reality necessitates.

Language of Chemistry: Corrosion and Chirality

Leave Walter White behind and becomes Heisenberg: drug lord, the “one who knocks.” Heisenberg is the hipster part of Walter White: the creative psychopath in search of the ultimate orgasm. Chemistry has another word for him: “chiral.” A molecule is considered chiral if there exist another molecule of the same composition but is arranged in a mirror image, like your right hand is from your left. They might look the same, but environment determines their unique behaviors. In other words, chiral pairs will not have the same reaction to the same environment.

Methamphetamine is a chiral molecule. It mirrors the active ingredient in over-the-counter medications like Vick’s Vapor inhalers and Sudafed. Most meth cooks can change one of these medicines into meth with a few simple steps.

Walt himself is chiral: Heisenberg (meth) and WW (Sudafed).

Chemistry as Art — his philosophy as a psychopath. Walt shows his true genius when he builds methamphetamine from the ground-up, not tweaking the chiral molecule, but making it all original.

Perhaps technology has replaced psychoanalysis as the accepted panacea for contemporary America, when really it’s a social cancer rotting America from the inside? If technology and its products are the root of conformity in contemporary life, then maybe the corporations that peddle them are the new analysts that promote an unhealthy societal homogeneity. In War, Mailer identifies Bush and his fellow CEOs’ quest for world domination through empire as a direct cause of terrorism and also suggests that their drive for empire seeks to keep the corruption or rebellion and subversive lifestyles at bay.

In War, he argues that while many believe that advanced technology is the solution for all of human ills, others think it’s that very technology that keeps us from our true purpose: “to refine our souls.”[8] This “spirit of technology,” Mailer continues, “may be the beginning of an international cancer we cannot cure.”[9] Technology, terrorism, and by implication the totalitarian urges of corporate America, the Bush Administration, and evangelical Christians, act like a cancer cell: “its basic desire is to kill as many cells and invade as many organs as it can.”[9]

According to the mainstream, this rot oozes from the sores of a lax morality that has infested America. Empire is the totalitarian trinity’s prescription for this sickness.

In Norman Mailer: A Double Life, Mike Lennon outlines a note that Mailer wrote about cancer. Within, Mailer describes cancer as a rebellion of the cells of any “over civilized person who carries murder within.”[10] The cells “dare to secede from the body,” causing a literal sickness that mirrors the mental. Walter White’s cancer, then, is a physical manifestation of a psychological sickness.

Literal lung cancer as a product of White’s emasculated position of neurotic conformity and psychoanalytic sublimation:

The second scene in the show’s pilot episode (after the first shows his cancer diagnosis) shows Walt’s potential for creativity, yet how he is a victim of his environment. His potential is stifled because of his acceptance of the status quo.

Chemistry is; well, technically, chemistry is the study of matter, but I prefer to see it as the study of change: Electrons change their energy levels. Molecules change their bonds. Elements combine and change into compounds. But that’s all of life, right? It’s the constant, it’s the cycle. It’s solution, dissolution. Just over and over and over. It is growth, then decay, then transformation. It is fascinating really. It’s a shame so many of us never take time to consider its implications.

While this allows WW to grow, it creates a hell for those closest to him: Skyler, Walt Jr, Hank, Marie, and even Jesse. Really anyone else that he comes into contact with.

Hydrofluoric acid (like lye) - used for decomposition: the corrosion of bodies.

Walter White’s cancer is a death sentence, both literally and figuratively. It allows him to go from one who is controlled, to one who is in control. By the end, he is not the figure we see at the beginning of the series, one who would arguably shrink and cower from the knock of death at the door. He, though the figuration of Heisenberg, has become the “one who knocks” — no longer in danger, but the danger itself. Walt is ultimately not interested in meth, his family, or his imminent demise, but in maintaining the empire that he has built — a symbol of his control, strength, and dominance that he has attained as Heisenberg.

Walt’s desire for empire echoes another concern that Mailer argues in War, namely what he sees as the Bush Administration’s quest for world empire. It’s this desire that derails his metamorphosis. His quest for empire itself becomes totalitarian, ruining his life and the lives of those around him.