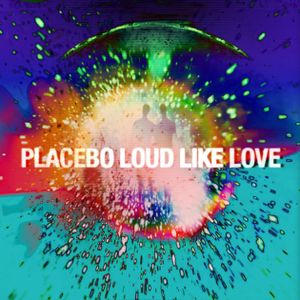 Placebo’s been on my playlist for a couple of years now — maybe my favorite Eurorockers. I discovered them through Last.fm; I believe they were a suggestion: something like, if you like Rush, then you’ll like Placebo. What do you know, they were right. Loud Like Love is Placebo’s latest offering, and it’s strong. While some of the songs keep with their traditional themes of overindulgence, insecurity of misfits, alternative love, mea culpa, fuck-you to authority, and unhealthy relationships, the leadoff “Loud Like Love” indulges in a pop-infused celebration of love — it’s is a catchy song, but not what I would call a good fit with the rest of Placebo’s oeuvre, or the rest of this album, really. LLL uses more keyboards and strings than I think any of their previous albums have — not a bad thing. They add a classical quality that gives a new depth to the music.

Other than the title track, the rest of the disc shares the theme of endings. “Too Many Friends,” the other ready-for-radio track, says good-bye to digital “friends”; “Rob the Bank” celebrates — in pure Placebo style — the end of the financial world as we’ve known it. “Begin the End” realizes with a sober, adult clarity that “There’s nothing left, no fortress, to defend.” “Exit Wounds” drips with jealously and bitterness — of a lover left for another; she’s gone and the narrator sings “I’ll take a drug to replace it, / or put me in the ground.” In “Bosco” — one of my favorites — the narrator takes responsibility for what a mess he is and tries to set his partner free. There’s a mature finality to the whole thing. The Nancy Boy is all grown up, and accepts his condition with a sober clarity: “I was so delicate when we began, so tender when I spoke your name. / But now I’m nothing but a partisan to my compulsion and my shame.” Likewise, the narrator in “Hold onto Me” asks:

Loud Like Love is a more mature album both musically and thematically. Brian Molko recently entered his fourth decade, so LLL banishes his teenage angst for more the thoughtful, nuanced, and grown-up. I hope this theme of endings does not mean Placebo is about to retire.

Sonically, like many rock albums, LLL seems over-produced, especially when the keys and strings fill out the soundstage, muddying it rather than adding another distinct sonic layer. The drums are miced too widely, though Molko’s vocals are dead-center stage. LLL won’t make The List because of these audio deficiencies, but it isn’t terrible either. Perfect for your workout playlist.

Overall, a solid album from a solid band. Rarely have bands made as much an impact on me as Placebo has. They are an integral part of my life’s soundtrack, and LLL adds a new dimension to it without a total departure from their earlier sound. You still know it’s Placebo, and that means a lot.