After today’s five-mile run, I have a mere seven miles left to complete my goal of running 1000 miles in 2013. It hasn’t all been an easy jog. I’ve made it through injuries, several pairs of shoes, the loss of a running partner, and an all-time busy work schedule by prioritizing exercise, something I should have done long ago. I feel better. I look better. I think better. I think I finally discovered a lifestyle I can maintain for the rest of my life. Since people frequently ask me how I’ve done it, I figured I’d take a few minutes to write my story down and hopefully motivate others.

That said, my doctorate is in English Literature — not medicine, so be sure to get your physician’s advice and consent before undertaking any diet or exercise change.

My goal to run 1000 miles in 2013 really began about the beginning of 2012. I was overweight, and I decided to do something about it. Really. I would this time, and I did. 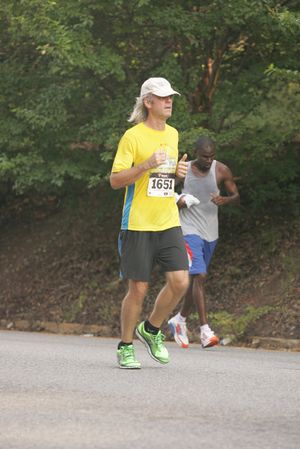 My friend and running partner Heather finally convinced me to run a race for Labor Day here in Macon. I was still a casual runner and didn’t really have any desire to go beyond that. Yet, sometime after I lost weight, my speed begain to pick up. I was suddenly able to run longer and faster. I think I was ready to give a race a try, even if I was just competing with myself.

It was a fun 10K. And to my astonishment, I did pretty well. I mean I didn’t feel as if I was competing, but I found myself passing people along the way — runners like looked more like runners than I did. I finished nowhere near Heather, but I felt my 51:28 (@ a pace of 8:14) 10K was pretty decent for my first race. I did better at my next 5K: at the Susan B. Komen race, I managed to finish before Heather. To be fair, she hadn’t run in a while, and she psyched me up to really go for it. I think my pace was close to 7:30 for that one.

I have managed to keep the weight off for the rest of 2012 by practicing a carb-light diet and exercising throughout the week. By the beginning of 2013, I knew I wanted to kick it up a notch.

While considering my 2013 resolutions, I received an email from RunKeeper that encouraged me to set some goals for the year. Based on my current running regimen, I thought I could reasonably achieve 1000 miles this year, so I set that as my goal.

I also knew that I needed to seriously begin increasing my strength. I was still eating right, but I was scrawny. I knew I was in good shape, but I wanted to add strength training to my running. So I joined the gym. I’m one of those people who can set a goal and usually make it happen, so I decided that at least three, forty-five-minute gym sessions a week would be doable. For a time, it was. However, lifting weights sucks. Going to the gym sucks. The whole gym scene is just not for me, so I found a better way.

After a few months going to the gym regularly, I did see some progress. However, I was still looking for a better way. One night while insomniac, I read Mark Lauren’s You Are Your Own Gym. It didn’t take him long to convince me to ditch the gym and start doing my strength training at home. I downloaded the Bodyweight Training app and started right in. I haven’t been back to the gym once since then, saving me time, travel, and $25 a month. I like the app because it has 10-week training sessions that are both challenging and easily worked into my busy schedule. As of today, I’ve completed the both the basic and intermediate training courses. I don’t think I’m ready for the advanced, so I might restart the 1st class or try some of the in-app video purchases.

Since the summer’s weather was pretty mild, I was able to stick with running. I normally switch to cycling during the hot months, but this year I ran throughout the summer, keeping on-track for my 1000-mile goal. Doing my YOYOG workout and then a run is a great start to each day.

Sundays would be my long runs with Heather. We ran at least eight miles, but frequently ten or more. I always looked forward to these runs: Heather and I could catch up, gossip, and challenge each other to run faster or longer. Heather moved north for a new job at the end of the summer, but we increased the frequency of our runs before she left. I miss my friend a lot. She has been an inspiration in many ways, but I look forward to running with her again when we get the opportunity — maybe even another race!

In May or June, my right foot began to hurt when I ran. At first it was a dull pain located in the arch that would bother me only at the beginning of the run. Like an idiot, I ignored it and powered through. It got worse, until it hit me full-force in the middle of a ten-miler. It felt like I needed to pop the bones in my arch, but I couldn’t. It was like the arch muscle of my foot decided to cramp and hold, so when I put pressure on it, it would only resist and hurthurthurt. My wife, an RN, seemed to think it was plantar fasciitis and advised me to give it a rest for a while. I thought I just needed new shoes.

The new shoes helped, so within a week, I was back to my regular 20-25 miles-per-week and ran the rest of the summer with no difficulties. Then, just suddenly, my heel started hurting after runs. It was a dull pain that seemed to be located in the center of my heel, you know right where the plantar fascia is attached to the heel bone. My wife — did I mention she’s an RN? — said it might be a heel spur and that I really needed to take some time off. This time, I reluctantly agreed. It was the worst time: right in the middle of a busy semester.

During my down time, I managed to do a bit of cycling and a bit of reading. Since it was in the middle of the semester, cycling is not really convenient for everyday exercise, since riding twenty miles takes a good two hours out of my day. Plus, the fall temps were dropping. Coupled with my strength training, cycling wasn’t optimal. Mostly, I just didn’t run.

While not running, I did some reading about running. Maybe books could give me some clue to avoiding injury. I began with Christopher McDougall’s Born to Run. This book is not only McDougall’s quest for an injury-free running lifestyle, but the story of humanity and how we have evolved to be the best endurance runners on the planet. He writes:

McDougall’s narrative is inspiring. He details the stories of several ultramarathoners and journeys to Mexico to commune with the spirit of running made flesh in an isolated tribe of life-long runners. Along the way, McDougall meets Eric Orton who is able to help him overcome the running injuries that have been plaguing him his whole life. Like McDougall, I wanted this secret, since

I read Orton’s book The Cool Impossible next, along with a couple of others. Orton’s framing narrative is mostly silly (imagine you’re flying to Jackson Hole to train with me…), but his detailed training program looks spot-on. He concentrates on strengthening foot muscles and revising form. He outlines a training regimen based on heart rate; it incorporates strength training targeted to runners. I’m planning on starting it in January, if I can afford to by the necessary equipment.

Reading about running only makes me want to run. After some time off, I wanted to ease back into it. Since both McDougall and Orton recommend minimal, zero-drop shoes, I decided this would be a good time to try them out. I’ve had a pair of Vibram Five Fingers for a while, but had stopped using them when running on concrete. Simply, they hurt. So, I got some Nike Free 4.0s (not zero-drop, but minimal), some New Balance Minimuses, and some Vibram Bikilas. I don’t really like the NBs: the soles are hard and the tongues keep bunching up inside the shoe. The Nikes are comfortable and have been good for longer distances. The Bikilas are much more comfortable than my original Five Fingers, but I still can’t run long distances in them on concrete: five miles seems to be my current max. 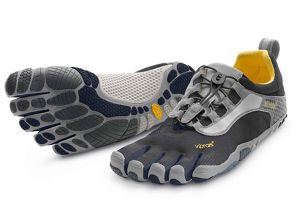 Since using the minimal shoes, my heel has begun to heal. I find if I stretch it out after the run, it gives me little, if any, trouble. Since the minimal shoes have changed my running form, making me run in a more forward position on my fore-foot, my heel has begun to hurt less, especially now that my other muscles have gotten used to the new shoes.[1] So far, I have not found the perfect pair of minimal, zero-drop shoes. I want to try some Altras next.

The minimal shoes have slowed me down. This might have contributed to my heel’s convalescence. I was used to running at a minimum 9:30 pace for my daily runs, but these new shoes have added between one and two minutes to that time. Much of Orton’s training has runners in their slower, fat-burning aerobic zones, so I’m not going to worry too much about pace right now.

In fact, I have been deliberately trying interval training on my runs. I usually begin at a comfortable pace and maintain that for a mile, then kick it up in mile two, and changing my pace for each subsequent mile. There’s no science here, but just a way of keeping my body guessing and varying my heart rate. It also makes the run a bit more enjoyable. I’ve also ditched the iPod and started using my Garmin Forerunner 110 again. 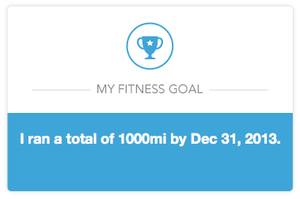 So that’s where I am currently in my running life. I’m still not 100%, but I feel better everyday. I’m not overdoing it. My miles have been cut back, and I’m alternating shoes each day, too. Running and strength training are still a priority, and I will keep them one. Not only is exercise good for the body, but it also keeps me sane. My forties are turning into my most healthy decade.

Even with my injury and time off, I’ll still hit my 1000-mile goal for 2013, maybe even on Christmas day. Keep running!