This week’s stories were Isaac Asimov’s classic “Nightfall,” Paul di Filippo’s “Phylogenesis,” and Tim Pratt’s “Impossible Dreams.” We’re still examining “convergence,” but this week I wanted to focus on the disruptions that sometimes occur when things line up in a certain way, occasionally by design, but more often by chance. Sometimes the outcomes are horrific, but sometimes they are wondrous. Whatever the outcome, something new is born out of all disruptions. 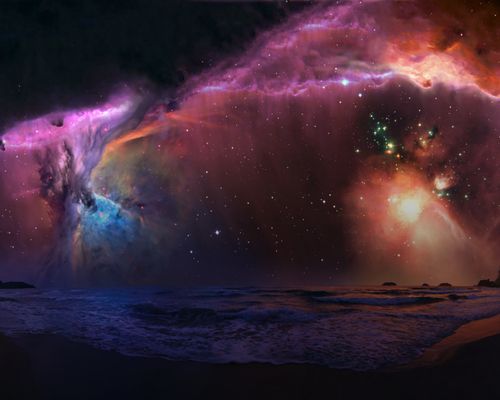 This idea seems to come out of our discussion of Dune, which we also finished this week. While Paul Maud’dib brings about multiple disruptions, the real one is yet to come. Dune ends with a sense of foreboding about the eminent jihad that Maud’Dib is powerless to stop. In human terms, war is often the ultimate social disruption. Even with its uneasy ending, there’s also a sense of an order established—that something repressive has ended, or at least changed with the coming of Paul Maud’dib. His endeavors mark a turning point in history, and change will come, for good or ill.

Asimov’s “Nightfall” has at its core something that seems always to be a central concern of his work: the limits of reason and science. Like his story “Reason,” “Nightfall” shows how empiricism is always limited by location. The astronomers of Lagash know something is coming, but they have no idea what. Because of their location in the galaxy, Lagash is spends all of its time in the light of six suns. However, once every two-thousand and fifty years, all the suns but one set, and the remaining sun is eclipsed for about half a day. During this time, civilization ends and most of the population goes insane. This is the mystery and the conflict in the story. It is the point of disruption for their civilization.

Science, itself, disrupts. “Nightfall” illustrates the contention between science and religion, or fact and belief. The scientists attempt to explain what will happen, logically and empirically. The “Cultists” have their own explanation based on mythological narratives and mysticism. Asimov puts these views in the boxing ring. Both acknowledge the fact of the coming darkness, but both have different explanations about the significance of the fact. The point seems moot, but herein lies the point: facts have no respect for beliefs. The scientists agree with the Cultists; their facts support the coming doom. However, the Cultists belief—their faith—has been brought down to the level of measurable reality. Or, as the chief astronomer Aton 77 puts it:

What ultimately causes the destruction of Lagash’s civilization is up for interpretation, but is seems to have something to do with the sudden realization of insignificance. Ironically, since Lagash is bathed in perpetual light, being an astronomer there is limited. Their perception of the universe is like humanity’s old geocentric one: everything revolves around them. Therefore, they are the most significant entities in the cosmos. Only darkness brings light, in this case, but it’s such an unexpected disruption that reasonable men lose their minds. Curiously, it seems that the Cultist’s predictions are upheld here: in fact, much of the scientists’ knowledge about past cycles comes from the Cultists’ “Book of Revelations,” as Aton 77 admits above. Perhaps, since their belief included “Stars,” their minds are more able to handle the shock.

This is why Asimov is so good: belief is always significant in his vision.

The other selections from di Filippo and Pratt are essentially love stories. They look at what brings people together and the impossible odds that such things ever happen. In “Phylogenesis,” Earth’s ecosystems are destroyed by these mindless, gargantuan, alien entities, and the only way for humanity to survive is to evolve with the help of technology into a viral form that could feed on the creatures and therefore perpetuate the human species. Humans have always been somewhat viral in our approach to environment—as Agent Smith famously explains to Morpheus in The Matrix—and that propensity pushes an allegorical reading of di Filippo’s story. That’s fine, but it’s also about survival, adaptability, and the spirit of life.

Finally, Pratt’s “Impossible Dreams” is really just a good, old-fashioned, geek love story. It’s a celebration of fiction as it is, considers the possibilities of what might come, and wonders at what could have been. Pete’s world order is disrupted by the appearance of a movie store from an alternate reality. Pete knows films, but when he encounters films that never were, he gets angry because “movies mattered.” They mattered so much, his world crumbles when he encounters the impossible. Instead of going insane like the denizens of Lagash, he unexpectedly meets a girl. Out of this disruption comes the possibility of real, human contact. At least that’s the feeling at the end. Pratt’s story just makes us sf geeks feel good. And that’s OK.