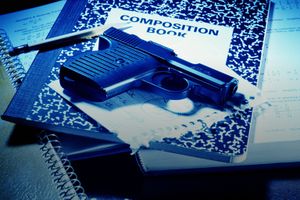 Apparently, the Georgia legislature feels, almost unanimously, that we citizens need to be armed. The right to bear arms is not enough: we have a compulsion to bear arms. In a gun bill that passed yesterday, 43–10, our wise legislators decided that guns are necessary in churches, bars, and airports.[1] We must psychically protect ourselves from errant ministers, other saloon patrons that might be trying to cheat us at cards, and, well, foreigners getting off the plane. Right?

I kept waiting to read about colleges and universities entering the new old west, and I was not disappointed. In a paragraph near the end of the article, we get:

The bill also grants public colleges and universities the right to determine if guns are allowed on their campuses. An early version of the bill allowed guns on campus, which university officials fought. The current version of the bill allows schools to make their own rules, but it is remains possible for someone to carry a gun just outside of campus. The existing law bans guns within 1,000 feet of a campus.

It’ll be interesting to see how this plays out. Like parishioners, students should pack heat. I know that my lectures are often physically threatening. I know that there’s a lot of racial and gender diversity in my classes, and we also get the occasional Muslim. Who knows when someone different looking and scary will just snap and start running amok. Or worse, when they snap and start saying something that is disagreeable and even controversial, politically challenging, or emotionally hurtful.

Well, we know these days that no one is capable of talking — of compromising in the least. We’re fighting an ideological war here, so we must arm ourselves in the places where that war is most likely to rear its frightening head. Maybe the legislature is wiser than I thought.

I mean, I should probably watch my mouth a bit more than I do. I know I got tenure — a system thought up by the academic elite in order to protect academic freedoms of faculty from politics — but that doesn’t mean I should be able to say what I want with impunity. Some things are just beyond reproach. I need to watch it.

And now, with the increasing likelihood that some of my students might be exercising their right to bear arms in my class, I have even more incentive to watch what I say. There’s nothing like the threat of being shot to keep me in my place. To keep all of us elitists in line, under control, and — you know — silent.

Can this be what all the hoopla is about? Is this part of a political agenda to impose an authoritarian oppression on those who challenge the status quo? The country does seem to be going down the shitter, you know, since that socialist Barack Hussein Obama took office. Don’t we need to protect ’Merica from those who want to steal it from us, including our own government? Indeed, that socialist medical bill just shows that they’re trying to take away our right to be controlled in the way we’re used to: by capitalism and patriarchy. The southern types and teabaggers seem to be the most offended, as they showed their outrage on Capital Hill on Sunday. Maybe someone would have brought a gun? That would show those uppity homosexuals and civil rights activists just what true fear looks like.

What happens when the second amendment trumps the first? Here’s the first amendment of the Bill of Rights:

Laws like the one just passed in Georgia nuance the second and therefore threaten the first. If I know a student is legally carrying a gun in my classroom, what does that say to me? Seriously. Yes, I have a right as a tenured professor and a citizen of the US to say what I want, but those ideological freedoms cannot stand up to the physical reality of a gun in my classroom. Period.

The language from the AJC I quoted above seems to suggest that colleges and universities will be able to institute their own gun policies. But I ask: for how long? The current climate of the university system in just the last year has been one of paranoid liability. Can’t we just see some gun zealot hiring an eager young attorney to sue Macon State or the entire university system because we instituted a policy of no handguns on campus? We can’t afford it. Therefore, I’m sorry to say, I don’t see a policy coming from the BOR or the college outlawing guns. I hope I’m wrong.

So, are we ready for the new old west? I better oil up my ol’ six-shooter.