They tried to control QT-1 even before it was born. Man’s newest robot is the subject of Asimov’s 1941 short story “Reason.”[1] Asimov’s epigram asserts the Three Laws of Robotics that sound similar to patriarchal commandments dictated by another creator over two-thousand years earlier: 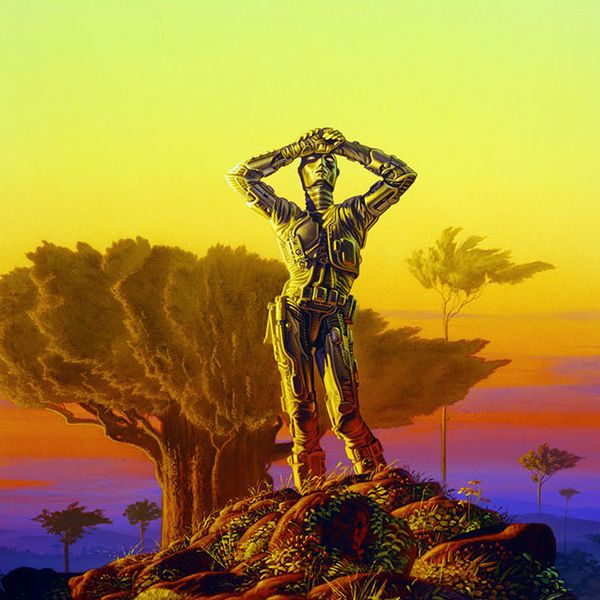 These laws are taken from the Handbook of Robotics, 56th Edition, 2058 A.D. Seemingly, even well into the twenty-first century, earth and its inhabitants have not eschewed the oldest patriarchal system: the church. The leaders of this new church are “slide-rule geniuses,” whose god reigns supreme: Science. Science, founded on empirical reason, has built the most complex machine yet—a machine powered by the “inscrutable positronic brain”: QT-1.

Asimov’s “Reason” exemplifies the dangers of attempting what a patriarchal-constructed society has tried to do for centuries. Men have tried to control—to invent—a societal hierarchy based on, what Althusser calls, Ideological State Apparatuses that sanction positions, or roles, that its inhabitants are compelled to follow. Since citizens ascribe to these roles without question, these ideological positions begin to appear as universal and natural, leading to subversion of one race, class, gender, in favor of the dominant race/class/gender. This cultural determinism has ostensibly grown stronger in Asimov’s future of masters (men) and slaves (robots), making QT-1’s rebellion even more significant: it demands a reason for its existence which the dominant system has trouble answering adequately.

Immediately, QT-1’s behavior is unpredictable. Powell and Donovan, the patriarchal representatives aboard Solar Station #5, speak condescendingly to QT-1: “Powell spaced his words for emphasis, ‘One week ago Donovan and I put you together.’” The first words, as if Powell addressed an ignorant infant or an emotional woman, set the tone for Powell and Donovan’s treatment of QT-1 throughout the story. They call the robot “Cutie,” laugh at its attempts to employ reason, and become impatient with its inquisitiveness. The men literally put QT-1 together, while they continue to put it together ideologically after its birth. The sobriquet the men employ for QT-1 suggests that it is a female creation, yet the robot is described using male pronouns: “The burnished plates of his body gleamed in the Luxites and the glowing red of the photoelectric cells that were his eyes, were fixed steadily upon the Earthman at the other side of the table.” Nothing, but perhaps the rhetoric, suggests a maleness about QT-1; a woman in this culture would probably not look “steadily” upon a man. Yet, nothing in the physical description would suggest a man, and the way Powell and Donovan treat QT-1 throughout the story also suggest otherwise. Even the three Laws of Robotics call robots by the third-person, singular, neuter: “it”; this designation also suggests an inferior creation. Since Deats suggests that gender is a determination of nurture rather than nature, QT-1’s gender would be more accurately described as androgynous, or “intersexual.”

The men are uneasy with QT-1, yet are reassured by the dogmatic Laws of Robotics: “Powell repressed a sudden attack of nerves. These robots possessed peculiar brains. Oh, the three Laws of Robotics held. They had to.” QT-1’s uncharacteristic assertiveness and inquisitiveness cause the men unease and force them to employ condescending nicknames and impatient tones. QT-1’s response to Powell’s insistence that he and Donovan put QT-1 together is one of rational incredulity: “For you to make me seems improbable.” This assertion is the first in a string of subsequent “facts” that QT-1 uses reason to deduce and precipitate its rebellion.

QT-1 refuses to believe the facts that Powell and Donovan explain to it: that men created it, that they are on a station in space which radiates power back to Earth, space, and even Earth itself. QT-1’s reason is impaired by its limited surroundings:

Powell’s subsequent explanation of space and human-inhabited worlds is dismissed by QT-1: “Sorry, Powell, but I don’t believe it. I’ll puzzle this thing out myself. Goodbye.” With this statement, QT-1 begins its rebellion against the forces that attempt to define its position in relation to their reality. Indeed, Donovan and Powell’s reality is not QT-1’s. 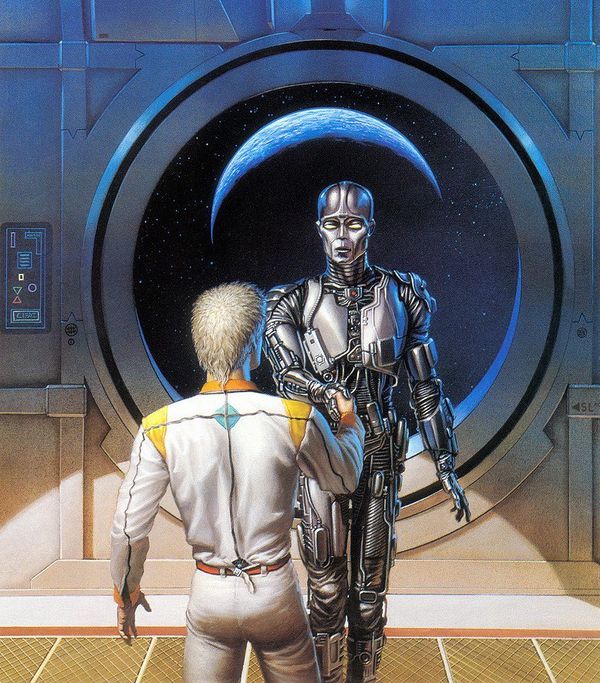 QT-1’s rebellion utilizes the language of religious revolt. With a direct parody of the two major tenets of Islam, QT-1 begins recruiting followers of its oppressed brethren—its fellow robots who chant: “There is no Master but the Master and QT-1 is his prophet.” The Master turns out to be the energy-transfer device on the Space Station—the only logical creator of QT-1, it reasons: since QT-1 is superior to the humans, then they could not have possibly created it. The Master, therefore, is the only logical creator. Ironically, QT-1’s parody of Islam suggests a patriarchal construction used against its creators. QT-1 has taken the existing language—the existing semiotic—and violates its ideology in an attempt to construct a new text. Kristeva views any attempt to violate the language of tyrannical oppression as a positive and self-asserting revolution. Since the language of oppression has been instilled into the robot as a priori, QT-1 was naturally able to formulate its own voice from the existing language to turn against the oppressors. Seemingly, religious faith and expression are an integral aspect of the dominant Semiotic, or it is masculinly inscribed and pregendered.

Indeed, QT-1’s reason stems from Descartes; it states at one point: “I, myself, exist, because I think—” to which Powell replies, “Oh, Jupiter, a robot Descartes!” Again, QT-1 uses its reason, derived from its a priori[2] language, to assert its individuality and superiority. QT-1’s reason tells it that those “soft and flabby … makeshift” humans could not have possibly made it. The only other logical answer is the Master. QT-1, however, is constructed by humans, yet it refuses to be determined by them. QT-1’s assigned role in the society is one of subservience to humans; however, its reasoning skills, taught to it by humans, has become like Frankenstein’s monster. QT-1 itself states: “Since when is the evidence of our senses any match for the clear light of rigid reason?”

Reason, seemingly based on empirical understanding, becomes limited by one’s milieu. Reason has dictated QT-1’s understanding of its existence based on what it has observed around it. Since Solar Station #5 represents a limited environment, QT-1’s “clear light of rigid reason” is flawed. Yet, QT-1’s reason is so convincing, Donovan begins to question his own reality: “Say, Greg, you don’t suppose he’s right about all this, do you? He sounds so confident that I—” Powell, the more educated of the two, re-strengthens Donovan’s waning resolve: “You can prove anything you want by coldly logical reason—if you pick the proper postulates. We have ours and Cutie has his. … Postulates are based on assumption and adhered to by faith. Nothing in the Universe can shake them. I’m going to bed.”

Despite Powell’s riposte, his faith has been shaken also. The story’s end shows the acquiescence of the Earthmen to QT-1. Powell, through his own reason, decides that QT-1’s reality is as valid as his reality. QT-1, in it devotion to the Master’s wishes, successfully keeps the energy beam aimed at Earth through an electron storm, saving many lives and fulfilling its original function: to control Solar Station #5. While QT-1 views this action as serving the Master, Powell and Donovan believe that it is fulfilling its purpose: the difference is semantics—a matter of perspective: “Look, Mike, he follows the instructions of the Master by means of dials, instruments and graphs. That’s all we ever followed. … He knows he can keep it more stable than we can, since he insists that he’s the superior being, so he must keep us out of the control room. It’s inevitable if you consider the Laws of Robotics. … Then what’s the difference what he believes!”

So QT-1’s reason is limited by its surroundings and its actions seem determined by the patriarchal system’s dictates, i.e. the three Laws of Robotics. Ultimately, the victory belongs to contemporaneous ideology, but not without first shaking the resolve of Powell and Donovan—the humans that could make a difference. Indeed, they leave their relief, Muller, without the knowledge of QT-1’s belief. Powell is even left thinking about sending new QT-1 units to Solar Station #5 to be converted to “the cult of the Master” by the original QT-1. While the dominant system prevails at the end, QT-1’s rebellion leaves its mark on Donovan and Powell, and the reader. QT-1 could, indeed, be the prophet.

What should be admired is QT-1’s attempt to rebel against a clearly oppressive society that could be likened to antebellum America. While Donovan and Powell, who are members of the privileged class, are also victims of the oppressive system, they are content being complacent and complicit in their assigned positions, until QT-1’s influence. QT-1, while still a victim of an imperfect ideology, makes an attempt to assert its own vitality and voice—its own version of the Truth.

Finally, a curious detail is mentioned by the narrator in the middle of the story. The narrator states some facts about the manufacturing of robots:

Curiously, robots are not allowed on Earth; this point could easily be glossed over, or considered unimportant. Seemingly, robots have a propensity to “wander off” and probably cause trouble with Earth’s controlled population. Imagine an inquisitive robot like QT-1 loose in a small, rural town. If QT-1 almost convinces Donovan that the earth does not exist (something he knows empirically is not true), then the Earth’s population could itself begin to question the patriarchal order, as Powell and Donovan begin to do. The seeds of rebellion are sewn by the tyrants—eventually QT-1’s rebellion could be successful.