Since last we met, the epic has grown closer to my heart. My concluding project in The Epic has become the focus of my Ph.D. work: the science fiction epic. Not only will I attempt to push the boundaries of the traditional epic genre, but I plan to look at various science fiction forms including film and novel, and discuss various ways to approach the study of the epic in the classroom. How can modern manifestations of science fiction illuminate the classical epic? What aspects of the genre have changed, or are changing, and how does a study of those changes effect or traditional understanding of the epic as a literary form? Where is the epic going as humans venture into the final frontier? 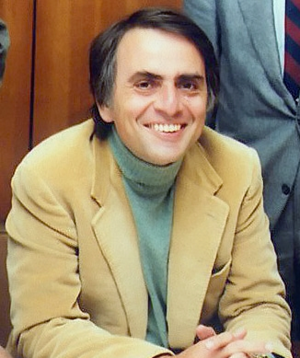 It seems to me that this present class will assist my project. The foundation of study in this class, Homer’s Odyssey, already suggests questions that are not only relevant to an understanding of the epic genre, but questions that are still pertinent to our society two-and-a-half millennia later. Odysseus’ spirit and raison d'être, i.e., the continual quest for truth—for home provide the historical foundation for humanity’s reach for the cosmos. Carl Sagan states in Cosmos, “Human beings, born ultimately of the stars and now for a while inhabiting a world called Earth, have begun their long voyage home.”[1] Indeed, Sagan’s point is that the stuff that we are made of may be found between the stars; perhaps some other key about who and what we are lies with it somewhere: “The nature of life on Earth and the search for life elsewhere are two sides of the same question—the search for who we are."[2]

Well, before I can continue that journey, I must complete this dass. As I have taken Dr. Fiore’s Epic Class, and had her direct my Master’s thesis, I feel confident that I am aware of her expectations in this class. Unlike The Epic, this class does not have a final project, and it uses journal entries and class discussions as parts of the midterm and final exams; this seems to be an interesting idea—one I could adopt for my own classes. The rest of the assignments are straightforward. The only apprehension that I have toward this semester is the amount of reading, especially the Joycean stuff. It will take most of the semester to read Ulysses. Yet, I am looking forward to the challenge.

Finally, the introductory lecture material on Vico was fascinating in that he was a marginal figure in the eighteenth century and that aspects of his philosophy seems familiar to mine. The word “fantasia,” i.e., the idea that you cannot know anything unless you make it, seems to tie into what I often tell my students. In discussing the essay, I always highlight their own creativity and imagination. In fact, Einstein, probably the most influential scientist in the twentieth century, said (or at least he is given credit for saying) that imagination is more important than knowledge. What, exactly, does this mean? The statement itself seems to be fairly straight-forward. But, when we begin to deconstruct the terms, we find ourselves at a loss. Indeed, what is “knowledge”? “Imagination”? Are they different? Is what we know derived from what we think? That is, do we create our own reality through this god-like imagination? Do we, as humans, imitate God in our daily lives? Was His/Her/Its ultimate creation our own ability to create our own reality?

Perhaps I have this all wrong. Did Vico mean anything like this at all in his conception of “fantasia”? I hope to find out. The other aspect that was grouped with fantasia is memory. This concept was defined as the “art of grasping the providential order of things.” Indeed, this sounds like Plato in his Phaedrus: the idea that the human soul has glimpsed the Forms before its union with the body; therefore, the soul still has the memory of the Universal order and will strive to reach it through whatever means it has at its disposal. Usually, states Plato, this means is Love.

Plato also discusses memory as the key ingredient in teaching and learning. He claims that writing is inferior to memory because the former is only a reminder or a memory—not the real thing. Since writing is written down, there is no room for dialectic. While I do not agree with Plato on this point, the idea of memory does correspond with the oral tradition of the epic. This tradition left room for change and growth. Can the Odyssey, now that it has been written down, ever change? I think it can, but not in the way it could with an oral tradition.

Some of his other ideas, like “Jove,” seem to correspond to what 1 know of Plato’s aesthetic theory. If Vieo’s idea “Jove” represents the Imaginative Universal, how is that different from Plato’s Forms? Well, I do not want to get carried away too much with this first entry. I am looking forward to a more intimate knowledge of Vico in his autobiography and his New Science.