Thus begins my newest journal, documenting my trip to London and other sites abroad in the summer of 2011. Once again, I am participating in the European Council’s London Study Abroad program, so I have the privilege of teaching and living in London for five weeks this summer. My adventure in 2009 was one of the best experiences of my life, and I predict this summer’s will be just as significant. I’ll be posting here throughout the summer, both in London and in Greece after the program. 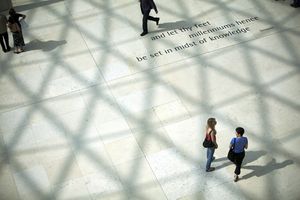 Last Saturday, May 14, was the student orientation in Milledgeville. We have nearly 90 students going with us, so the theatre was packed with wide-eyed and slightly overwhelmed people: students, of course, and many of them with their friends and parents. I’m not sure what it is about study abroad, but it attracts more women than men. In fact, I do not have a single male student in either of my classes. I wonder why that is? This study suggests that men are more likely influenced by their social experiences and the comfort of their local environment, while women actually listen to parents’ and professors’ encouragement to expand their horizons by leaving their familiar surroundings. This Chronicle article agrees, adding their major might also contribute to it: women are more likely to study the liberal arts, while men concentrate on more technical fields. The former seems to be more conducive to travel. Type of college also seems to factor: those at community colleges are less likely to study abroad. The latter is definitely a challenge in recruiting for me at MSC.

I was able to get ten students to actually sign up this year—much better than I did in 2009. However, only three will be going to London. Several dropped out, and several are going elsewhere. Still, three is pretty good. Next time, I plan to double that, at least.

This year’s program marks another first for me: I’m teaching photography. OK, I’m not really qualified to teach a straight-up photography course, so I constructed a hybrid: I call it “Photo London,” and it’s a cultural studies course with a photography element. We’ll be interested in capturing narratives of London in our photography. In my introductory remarks on Saturday, I used composition as an analogy. Photographs are compositions much in the same way that essays are, or poems. There is the subject, supporting details, thematic elements, motifs—all within the frame, or scope, of the composition. While I do not enjoy teaching writing, this type of visual composition seems applicable to my professional qualifications and my current artistic endeavors.

So, I have about a month left before take-off. My classes are prepped, and all I have left to do is figure out what I want to do on my free time in the UK. My friend Todd is teaching on the program again, but his wife is traveling with him this year. I assume I’ll hang with them a bit, but it won’t be boys’ time like it was in 2009. I think I’ll try to get out of London more, maybe finally get to Stonehenge, Dover, Cambridge. Giles is still trying to get over for a few days, and he and I might check out Amsterdam, though that might be a bit too expensive this year for me.

I hope to take some photos, too. I think I’ve improved as a photographer since my last trip, and I aim to prove that. Here are some of my better shots from 2009.

Perhaps the highlight of this summer’s trip will come at its end. Autumn arrives on July 30, and she and I will meet Todd and Jennifer in Athens (yes, Greece!) for our second European vacation. Autumn was able to come over in 2009, too, but we stayed in England. This year, we’re getting on a plane and heading to the Mediterranean for almost two weeks. Now, this will be an adventure. So far, we have Delphi, Athens, and Santorini on the agenda.

I can’t wait. Only about a month to go.