Be Nice to People, You Jerk!

Sometimes I feel like one of Dostoyevsky’s pathetic heroes, you know like the Underground Man or Raskolnikov. For me, what separates Dostoyevsky’s heroes from his villains is capability. The villains are capable of the evil they intend, while the heroes are not. Often this just makes them pathetic, like the Underground Man, or it provides the way to redemption, in Raskolnikov’s case. The UM is self-important, but is incapable of living up to his own perceived superiority. He considers himself superior, but is incapable of even making meaningful contact with others. Like Hamlet’s nutshell king, the UM is a god in his own mind, and he curses the outside world for not seeing it. This ostracizes him from his community, making him bitter, resentful, and ultimately pathetic and ineffectual. I can relate. 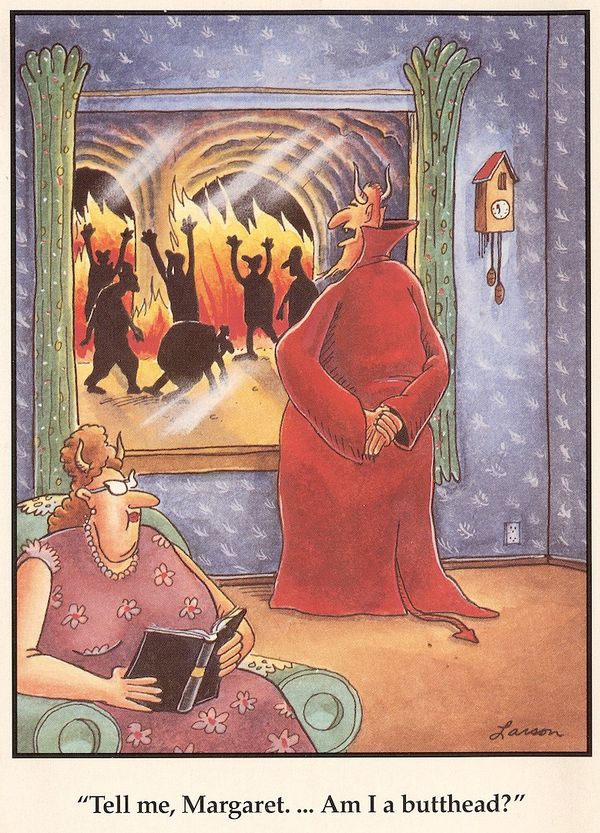 My favorite Far Side.

Raskolnikov, like the UM, finds his position in life untenable. He sees himself as deserving of more and seeks to earn it by committing murder. He is the UM who actually comes out of his mouse hole — the ineffectual introvert becomes the homicidal man-of-action. Yet, Raskolnikov, while capable of murder, is ultimately incapable of being a murderer; i.e., his conscience won’t let him live with it. He is not the Superman, but a mere mortal with a cowardly conscience. This realization is what makes Raskolnikov deserving of admiration: he accepts responsibility for his actions and the consequences of those actions on others. He, with the help of Sonya — someone outside himself — is on his way to redemption.

Dostoyevskian villains, on the other hand, are psychopathic (potentially psychotic), unaware of, dismissive of, or unconcerned with others, like Svidrigailov or Smerdyakov. They are the murderers — the Nietzschean Supermen that look down upon the masses and are therefore amoral in their dealings with them. This makes them unpredictable and capable of atrocity. They are what the UM can never become because he is too pathetic and introverted. Raskolnikov might have become a villain, but it’s his connection with Sonya that allows him to escape this fate.

I would argue, too, that there’s something more to it than morality. The UM is arrogant, but his actions to not justify his superior attitude. He’s like someone who thinks he’s a great gunfighter because he can hit the bull’s eye every time at the shooting range. However, when it comes to a real, high-noon, main-street showdown, he is killed immediately. This is what Nabokov called poshlost — a “petty evil or self-satisfied vulgarity.” It’s the banal, the trivial, the pathetic, the lack of significance, the gritty, the sensual. The UM thinks he’s great, but in comparison to his community, he is vulgar and pathetic, a victim of his own poshlost. In contrast, as Norman Mailer argues, as least a murderer is “not altogether altogether cowardly.”

Maybe this is why I can relate to the UM. I, too, have delusions of superiority, but when I look at my actual capabilities, I seem to fall short. I’m often bitter and resentful, and I take that out on others, especially those that are “inferior.” Rationally, I know I am superior to no one, but like the UM, this knowledge doesn’t stop me from being pathetic, petty, vulgar — a jerk. This makes the UM do crazy things in public — like his poshlost takes over. It’s when I know what I’m doing is wrong, but I do it anyway, almost like a compulsion, like a devil is driving me on. A poshlost possession. In hindsight, these moments are absurd and even painful and shameful to recall, but I can’t stop myself from doing it at the time. I don’t think I’m crazy, but I occasionally do crazy things. Fortunately, I’m no Raskonikov. (If you’re unsure what I’m talking about, watch an episode of Larry David’s Curb Your Enthusiasm. He does poshlost well. You can see some of this in the Michael Scott character in The Office, too.)

I need to get over myself. I keep thinking of another great Russian writer’s own pathetic character: Tolstoy’s Ivan Ilych. In life, Ivan is a judge, sitting high above those he sentences. His position places him on a social and intellectual pedestal, and that affects how he sees himself and his relationships to others. He, like the UM, is detached from humanity, and he dies a dreadful, meaningless death because of it. During his decline, he learns — too late — that he is not superior to anyone, and that to make life the best we can, we need to be compassionate and understanding — you know, kind, thoughtful, compassionate. It’s that old do-unto-others rule. There’s some wisdom there.

So, consciously and deliberately, I will be nice to people. I’m going to try.