The Novel and the Order

Arguably, the dominant form of literature in the twentieth century was prose fiction, of which the novel was a titan, if not a god. Indeed, there is something god-like about the novel and its relation to western civilization’s sense of identity and order. While the novel has its genesis in ancient prose texts, it didn't develop fully until certain intellectual and technological foundations were laid. Since the Enlightenment, the novel has become an art form of—in Lukács’ words—the “new world,” a chief guide for the modern human seeking meaning in a cold universe.[2] The novel, therefore, seems to be the medium of expression for a 20th-century zeitgeist, fully developed during the modernist days of recovery from the intellectual revolutions of the turn of the century and the literal rubble of the first World War. And while the work of the modernist novel was serious and sober, the postmodern novel's authority is, perhaps, ironic and blasphemous. 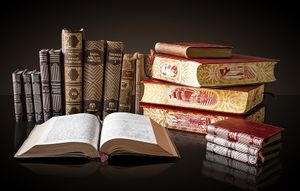 While the world enters the digital age, the novel stands defiant. While many seek a new art form for the digital age—a cyberbard or a collectively authored cybertext—the novel appears to still provide something we need. After all, the novel has been developed since the invention of written language; it’s related to the epic, the romance, the novella, the picaresque and various modes of expression, the tragic, the comic, the moral, the licentious, the ideal, and the real. The novel's emphasis on the character’s relationship to her society and her universe is traditionally told in a comfortable prose—in a language of verisimilitude that is comforting enough to allow the reader to engage new ideas. The novel, arguably, has become the medium of authority in the contemporary world, even despite the digital wave.

Perhaps the novel gives an order to life, particularly in the days following September 11, 2001 when America, as Norman Mailer noted in Why Are We at War?, was going through an identity crisis.[3] The fact of terrorism shatters the meaning of life and death, robbing our lives' order and replacing it with absurdity.[4] The rest of Mailer’s essay examines the aftermath of 9/11: in an attempt to rebuild the national ego, many Americans became flag-waving neo-cons, drunk with a mindless patriotism that sought to reassert itself through a jingoistic wave of moral cleansing. A literal American supremacy in the form of empire must be asserted no matter the cost.

I would argue, too, that this struggle is expressed in the flow of the word. The digital word resembles the political anxiety of disorder and insecurity. With books, the word was solid, permanent, authoritative. With the Internet, words become tenuous, temporary, fleeting. Printing on dead trees provided a way to measure and judge the validity of the word because it could be held in the hand, put on a shelf, reliably referenced. The World Wide Web, too, opened up the flood gates of opinion, obfuscating the voices of authority by those of the masses: yes, the word gained more of an equality, but at the loss of the authoritative voice. In an age of print, achieving admittance into the world of publication was a Herculean task, but blogs now allow anyone with a computer to have a voice. These disparate voices represent for many the planes demolishing the towers of authority. While many revel in their newly found voices, many in America are left reeling and longing for the days of the few, sanctioned voices that could give them direction and order.

The problem with digital forms of art, especially literature, is that they seem to lack the necessary force of authority to provide them the structure they need to fulfill the audience's aesthetic expectations. As Janet Murray points out in Hamlet on the Holodeck, audiences expect the guiding presence of the author to deliver a unified experience replete with all the accouterments of narrative.[5] Without the authority, the narrative ceases to be engaging because it lacks the singular focus or unifying vision that we expect from literary expressions. The digital challenges the established conventions of the literary, and while we have traditionally turned to stories for a reflection of ourselves and for meaning, the digital explodes meaning into multiplicity.[6]

It seems, then, that we are still in need of the author. Perhaps this will be the cyberbard that Murray suggests might become the voice of the digital age, or maybe we aren't ready yet to dispense with the novel just yet.