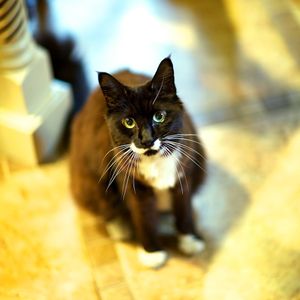 I thought he would hold on until I returned home. However, the fibrosarcoma neoplasm growing in his stomach for over a year – the tumor that robbed him of his weight – finally took his life.

He was my handsome boy – a good cat. He always loved me, no matter what. He was a handsome boy, a chub, and you couldn’t help smiling at his crooked moustache and his super long tail. He was the softest cat I’ve ever pet, and maybe the most vocal. He always had a story to tell, but they all seemed to have the same plot. He always had a way of making me feel better by sitting on my belly and purring or just hanging out with me on the couch. I will miss him terribly.

Apollo was about six months old when Jesse and I found him in the Petsmart cat adoption. Even then, he was a character – soft and vocal, he was cool. We were told that someone had just adopted his brother; that was probably a good thing, since we would likely have taken them both instead of just Apollo. We had no intention of adopting a cat that day, but I’m glad we did. We got him for Jesse, but circumstances brought him to me within a few months. It took Anna and him just a few days to start getting along. I wish I could say they were inseparable, but at least they liked each other. I even think they kept each other groomed, though I never really saw it.

Apollo grew to seventeen pounds at his heaviest. We called him “Fatty” and “Chub” most often. He understood that they were not sobriquets of disparagement, but of love.

Chub was with me for the rest of my time in Florida, and he and Anna moved with me to Macon in 2002. Over the next nine years, he lived with me and Anna (and eventually Autumn) in one apartment and two houses. He seemed to thrive more in the smaller places, or maybe it was around the time we moved into Hines Terrace that he got sick.

Apollo was in many ways my best bud. I even liked him better than most people. His death is like a piece of my heart cut out. He will be missed. I’m sorry that I wasn’t there at the end, but thanks to Autumn he had what he needed.