I was a lazy kid. I was a fat kid. I was an androgynous kid. I think these things were all related, and while my weight has been an issue my entire life, now that I’m in my forties, I struggle with it like I never have before. Some of this has to do with food, but I’ll write more on that later. 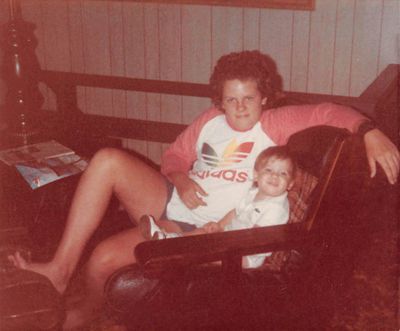 Exercise is like anything else in life that’s important: it must be practiced regularly and deliberately. It needs to be fostered in children from a young age if it’s going to have a life-long impact. To see how necessary this is, just look around you. The number one cause of death in the US is heart disease, just above cancer and stroke. How much do you think poor diet and sedentary lifestyle contribute to all three?

I didn’t start to run until my mid-twenties. I always remember my father running; whether it was for his health or to escape my mom, I’m not sure. He used to come home from work and run three-and-a-half miles, around the Sara Bay Country Club. We happened to live near it; we were not members. I guess I started running in my twenties because that’s what I remember my father doing. Running seemed to be one of those things I could do on my own: something that would allow me to challenge myself to improve, unlike a team sport.

Yes, I did play team sports growing up, none of which I really liked or was very good at. I was probably best at baseball, but I couldn’t hit very well. That might have had something to do with my lazy eye, my lack of athletic skill, or my growing frustration and apathy for the game as I grew. I tried football and soccer, too, but those were even worse than baseball, probably because they required more movement. At least the bulk of playing baseball is standing around waiting or something to happen, like hanging out in a park on a sunny day. Dad introduced me to golf, too, but golf balls are even smaller than baseballs, so I never could drive the things very well. No, I never was a team player, nor did I like playing with balls.

My interests were never really conducive to exercise, either. I liked to watch television, listen to music, read fantasy and science fiction novels. I would much prefer staying awake all night to finish the latest Michael Moorcock novel than getting up with the sun to go chase balls around a field. Weekends were great that way: reading all night; getting up at noon to ride my bike to the Showbiz to play video games and eat pizza; going to a matinee at the mall to sit in the air conditioning and catch a double feature. I guess if it wasn’t for the bike, I wouldn’t have moved very much as a kid.

Riding my bike was something I didn’t mind doing. Yet, it was a necessity more than anything else. I was an independent kid, so I preferred to be self-reliant. The bicycle was a way to do that: I rode to school, to the mall, to McDonalds. Yes, it was probably dangerous, but that sort of reality doesn’t occur to a middle-schooler. My parents didn’t raise a fearful child. I was even hit a couple of times, but I was as resilient as a basketball. 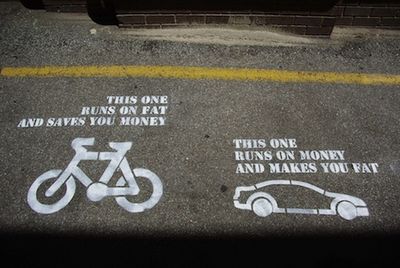 Running and cycling have become my preferred modes of exercise. Yet, they are dangerous.[1] My current town is built for motor vehicles, not for pedestrians, nor cyclists. There are few sidewalks, and where they do exist, they are in disrepair. Streets are narrow and many of them have no shoulders. People drive bigger and bigger SUVs and trucks and seem to be interested in anything but driving. Not only are the vehicles larger, the drivers seem to be more aggressive, impatient, and distracted. All of this adds up to an environment that actually discourages its citizens to be healthy.

One of my favorite examples is the first apartment I lived in when I moved to Macon. It was a gated community that had no access — in or out — for pedestrians or cyclists (or motorcyclists, for that matter). You had to be in a car in order to trigger the gate. This would cause me no end of frustration. The management didn’t care, and led me to conclude that Macon hates pedestrians. If this sounds like a generalization, just have a look around. I don’t see that it has gotten any better. Our priorities seemed skewed.

In fact, my current state of residence makes it unlawful to purchase alcohol from a package store on Sundays. Their motivation is purely religious, which is frankly a load of shit. However, they might be on to something. I would be perfectly happy to give up alcohol on, say, Wednesday, if they made driving illegal, too.[2] Or consuming meat. Or smoking. I mean, seriously Georgia, if you’re gonna do it, let’s really do it. Forget the bullshit religious reasons,[3] let’s cite health as the reason. I probably drink too much alcohol, so it would probably do me good to take a day off. But, what’s worse, a beer or a grilled NY strip steak? A glass of wine, or a Big Mac? A Manhattan or a country drive in the dually?

This is not only an issue of individual health, but one of economics and environment. Seriously, how can anyone disagree that cars are a major problem that will have to be addressed soon? I know that we have built our current society on and around the automobile, but can’t we see that this choice is killing us? No, I’m not talking about the planet; I’m taking about us — the humans. I’m also not talking about giving up the convenience of the car altogether, but I am suggesting that we begin to consider the consequences of this convenience. Yes, I love to drive, but I would gladly give up that love most days of the year to be able to ride my bike safely to work.

Like many things, cars make us careless and thoughtless. We just can’t afford to be that way anymore. Let’s be deliberate about our choices.