The section of First Person: New Media as Story, Performance, and Game on ludology suggests that video games should be studied differently than one would study a narrative; i.e., they are not (just) stories, so the considerations of play must be considered foremost. The most useful discussion in this section centers around configuration. 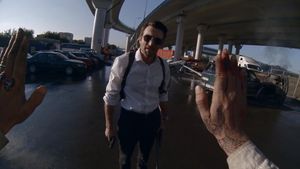 Eskelinen, the most outspoken and intractable of the group, suggests that most “dominant user function” in video games is not interpretative, but configurative. He begins to explain: “in art we might have to configure in order to interpret, whereas in games, we have to interpret to be able to configure, [ … ] consequently, gaming is seen here as a configurative practice, and the gaming situation as a combination of ends, means, rules, equipment, and manipulative action.”[1] Moulthrop nuances this idea a bit more by explaining that configuration allows a user to influence a virtual environment in such a way as to change it in potentially significant ways.[2] His definition suggests that the more user understand the game system, the more she is able to manipulate the world in ways she desires. Moulthrop pushes this configurative practice further by suggesting that this type of play does not only help within the gaming environment, but could have implications on the “conditions of other rule-systems such as work and citizenship” which may impact a player’s ability to “resist immersion.”[3]

Moulthrop’s theory seems similar to de Certeau’s notion of tactic, i.e., a local resistance to the powers-that-be. This, too, reminds me of a hacker, or bricoleur, who takes technology and changes it suit her local interests, thus using the technology in such a way as to resist the original intentions of those that created it. Moulthrop sees the cultural context in which games are developed, encompassing the narratives that inform them. He suggests that “we might want to think beyond games in their most literal sense, or rather to see them as elements of a larger process.”[4] This cultural approach allows games and the technologies that drive them to become transparent: it opposes immersion and allows us to retain the critical capacities to oppose those powers that attempt to control, like government and commercial interests.[5]

Aarseth adds that if you want to understand a system, you have to understand how its parts work together.[6] I’m reminded of my tenure as a system administrator of a Linux machine. Any new service, like a web server, mail server, or a wiki, would require me to download, configure, make, and install new software from source code. The configuration would take place before I made the binaries, which are the actual programs that run the service, like Apache. In order to configure the source code properly, it would have to be built for my particular hardware and software, and I would have to determine just what I wanted to software to do. After the software is configured to the computing environment, I could also tweak my “config” file, allowing even more control over the software. I think the major point is this: in order to get the software to run securely with the proper services, you would have to configure it properly. This entails anywhere from a cursory to an intimate knowledge of the language of configuration. The more I wanted my web server to do, for instance, the more familiar I have to be with the language of the web server. Put another way, this configuration is like knowing the rules of the world in a game: the more intimate one’s knowledge is, the better one will be able to play, yes, but also the better one might be able to manipulate and possible bend and break those rules. Here’s Moulthrop’s “possibility of opposition.”[4]

Read with the notion of simulation in mind, Moulthrop’s piece takes on a more poignant weight. Aarseth, in his essay “Genre Trouble: Narrativism and the Art of Simulation,” suggests that the best way to understand the configuration of a system is by making a simulation; he states that “all computer games contain simulation.”[6] Indeed, maybe this speaks to their popularity and the ever-increasing development of them toward realism. Aarseth recognizes its importance in any theories involving games: “It is time to recognize simulation and the need to simulate as a major new hermeneutic discourse mode, coinciding with the rise of computer technology, and with roots in games and playing.[7]

If Aarseth positions simulation as so important in both the conception and realization of computer games, more consideration should be given to the ethics centered around simulation, at least according to Simon Penny in "representation, enaction, and the Ethics of Simulation.” Penny opines quite persuasively that simulation is a powerful tool in training the body, and computer simulated environments are very good at this.[8] Penny argues that simulations have a direct and important roles in preparing the body for rapid response, beyond thought.[9] Through repetitive drilling of the body in a simulation and exposure to the likely results of actions, both soldiers’ and pilots’ bodies are more likely to translate those actions in the real world during times of crisis. While pictures and many games metaphorize human action, Penny sees immersive video game simulations at that much closer to the literal. Therefore, “whatever the power of images, interactive media is more.”[10] With the obvious real-world ethical implications, Penny also sees that the design of these simulations limits choice, action, and behavior. The user of these systems—one that that has been trained—become determined by them; i.e., their actions are limited by their newly acquired instinctual response toward a moment of crisis.

What, then does this do for configuration? Moulthrop would argue that these simulated environments are to persuasive, perhaps limiting or eliminating that “possibility of opposition” by creating a too transparent environment. It seems that configuration only remains possible when the play is understood as play—when one’s head can tell the difference between reality and game. Are we back to Murray’s “thinking woman”?