Hey! What about Truth and Beauty?
(Or, Technology and the Creative Artist Wrap Up, Part 1) 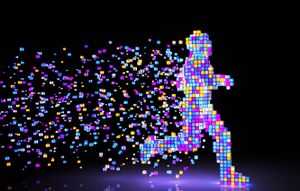 I began this semester by asking the question “what is art”? After a discussion that suggested art was anything from an escape to humanity’s finest achievement, we, perhaps artificially, narrowed our definition to state that art is always:

I note that this definition seems not to address certain aspects of art that one might expect, like beauty, truth, pleasure, spectacle, emotion, agon, and other criteria traditionally ascribed to art. These omissions are, perhaps, problematic as several critics have observed in our course readings. More on that later. This course only cursorily touches aesthetics, so in order to progress, some criteria needed to be agreed upon.

We further limited our study’s purview to the production and presentation of art for which a computer is integral. This is our definition of “technology” in this context. This class explored the current, and incunabular, connections between art and the computer. Taking a cue from Janet Murray’s Hamlet on the Holodeck, we are interested in stories that cannot be told in other ways,[1] ones for which the conventions are still evolving,[2] ones which need a convergence of formats,[3] ones that suggest play as an integral aspect of the aesthetic,[4], and ones that push the boundaries beyond the linear in order to express parallel possibilities.[5]

Carolyn Handler Miller's Digital Storytelling addresses some of the practical concerns that storytellers working with computers must face. Miller stresses that digital storytellers should use both the strengths of the format and their individual strengths in a collaborative, interdisciplinary effort when authoring digital media.[6] She introduces several terms in an attempt to characterize the unique aspects of computers:

Miller’s book, though not theoretically rigorous, provides a strong foundation for engaging in the consideration and authoring of hypermedia. Though, as her title suggests, her approach is in the tradition of storytelling: an epistemology of narrative. She emphasizes collaboration in an increasingly interdisciplinary field, suggesting that team members should use their individual strengths toward the efficacious completion of evermore complex projects. Miller introduces in popular lay terms the ongoing debate between narrative and play and the ambiguity between these practices that the computer presents.

Part two of this overview will address the key concepts from probably the most influential theorist of narrativism: Janet Murray.