Janet Murray's Holodeck
(Or, Technology and the Creative Artist Wrap Up, Part 2) 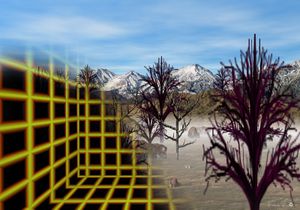 For many, Janet Murray’s Hamlet on the Holodeck represents the foundational text that defines cyberdrama and narrativism. Her seminal work theorizes a “universal fantasy machine” that the “half hacker, half bard” could use “to write stories that cannot be told in other ways.”[1] This experience, one that Murray likens to Star Trek’s holodeck, would be continuous with the tradition of storytelling and would be valuable in allowing humans to explore their inner lives through a technology that aims to become transparent: leaving us to experience only the power of the story and what that says about our humanity.[2]

Murray's Hamlet seeks to align humanity's literary past with our need to push beyond the boundaries of linear storytelling.[3] Central to her discussion is the current manifestation of what might one day become the holodeck: the personal computer. Murray sees as representing the promise for a narrative entertainment of pullulation—one that could represent multiple and even contradictory realities—that our current media cannot.[4] We are facing a unique time when our demand for multiple representations of reality is pushing the borders of our artistic representations, resulting in a convergence of formats that only a computer can facilitate.[5]

One criticism leveled at Murray—and, in fact, most of the proponents of narrativism—is that she borrows theoretical language and approaches from other disciplines and applies them to what they see as a unique genre: the computer game. I discuss the ludologists a bit later, but Murray's approach does borrow from other disciplines, namely literature; however, she seeks to remain in a tradition of artistic production, and her study begins with the two-thousand-plus years of literary tradition. Since my training is in literature, I must admit my bias here. And let’s face it: if Murray wrote about video games, her book probably would not have held the weight it does today.

In order to talk about a new genre, Murray defines the essential properties of digital environments. They are: procedural, participatory, spatial, and encyclopedic. The former two represent what is popularly known as “interactive,” while the latter two further nuance “immersive.”[6] She spends much of the book defining and illustrating these essential properties of the computer in an effort to develop a poetics of cyberdrama, to learn what the characteristic pleasures of digital media and just what truths it suggests about our unique time.[7]

Murray places her cyberdrama between the goal-driven maze and the open-ended rhizome, suggesting that users do not want to totally give up a authorial voice, but want to participate more in a narrative than just turning the pages of a book.[8] This desire, seemingly born of our relationship with computers, Murray suggests, could provide us with opportunities to role-play in ways never before possible, giving users more agency in mini-dramas that can be rehearsals for life.[9] In this way, Murray envisions the computer as the defining device of our time that holds the potential to express our unique truths and beauties, like Shakespeare's soliloquies did for his.[10] In this way, too, the artistic expressions that utilize the computer align themselves in an artistic tradition of storytelling:

For Murray, the computer represents the machine that can hold the media through which humanity can “confront the unanswerable questions of human existence.”[11] This seems like one of the functions of art: a process which engages like tragedy, rather than one that offers an escape, like Quake. I’m not suggesting that both aren't integral to defining the human condition, nor do I think is Murray. Yet, it seems that her vision of cyberdrama allows humans a place where they can engage reality, not escape from it. We have the TV to do that already. The computer, she continues in “Game-Story to Cyberdrama,” is redefining both stories and games by allowing