Heated Grips; Or, Have More Confidence in Your Machine

About ten miles out of Murphy, North Carolina, I remembered that I had heated grips. 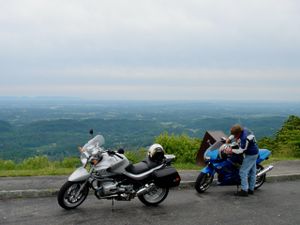 Thomas and I took in many similar views.

It had been raining steadily on us since we left Robbinsville, and my rain gear had been keeping me nicely dry and warm, except for my hands. The rain brought lower temperatures, and the elevation didn’t help. The BMW’s windshield didn’t keep the elements off my hands like the Nighthawk’s, so my gloves were quickly soaked, and my hands quickly became as cold and cramped and shriveled as a zombie’s. I remember thinking that we should stop soon having just covered about fifty miles since our Mexican lunch in Robbinsville, so that I could improvise something to cover my quickly numbing hands. It suddenly hit me: my new bike has heated grips. Much to my pleasure, after cranking them up to high, my hands became toasty warm, though still damp. I felt foolish that I didn’t remember this sooner.

The whole trip had not been as damp. We had left late on Friday, after getting Thomas’ Superhawk a new tire, and headed north toward Pigeon Forge. Dad was expecting us about 8, and we had nearly 300 miles of mountain roads to cover in about six hours. We made our first stop about 50 miles north of Atlanta, just at the end of I-575 for a Monster energy drink.

We quickly zoomed northeast through Dawsonville—where I had to recycle my Monster energy drink; Thomas didn’t see me stop, but we met up again just south of Dahlonega—then continued up 19 to Blairesville. I’ve taken 19 before, but I didn’t remember the sweet twisties beginning about 15 miles south of said town. Well, heading up, I have to be honest, I didn’t enjoy them all that much. The new bike felt a bit heavy, and my confidence wasn’t what it was on the Nighthawk. I took them as slow as a minivan, and Thomas sped around me to enjoy what I could not. I wasn’t sure what it was, but I made it to our next stop noticing the sun setting quickly. We had quite a ways to go, and it was nearly 7. Where had the time gone?

We made it quickly to Murphy, then Andrews—both of which are on the sweeping four-lane 74—and turned north on 129 just outside of Robbinsville. We cleared the rest of the way to Deal’s Gap as the sun was setting, and we rode the Dragon in the dark! It was my third time on the Tail, and Thomas’ first. Those were the longest eleven miles I rode that day. We stopped just at the end for a rest and couple of pictures.

Yes, it was dark already. Crazy, huh? If Dad wasn’t expecting us and my cell phone actually got reception, we’d have probably stopped in Robbinsville. Here’s a shot before we rode the last forty miles over the Foothills Parkway to Dad’s.

I think we finally arrived about 10:30 pm. Needless to say: after a couple of beers and a bit of catching up, I was zonked. I knew we’d have more riding to do tomorrow. 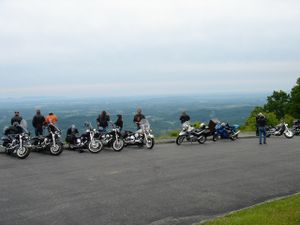 Somewhere on the Blue Ridge.

We spent the next day—after we waited all morning for the rain to stop and the sky to clear—riding in the Great Smoky Mountains National Park. I had never been on the Blue Ridge Parkway, so we decided to check it out. Glad we did. Going up the Blue Ridge, I was in the lead, but we were stuck behind the requisite minivan, so our progress was as slow as the scenery was beautiful. After stopping for some pictures and a rest, we headed back, wanting to take it easy today in anticipation of a longer, harder ride the next day. Well, going back, Tom took the lead, and we flew through those long sweepers, like an X-wing through a Death Star trench. Since the road was immaculate, I put a bit more faith in my tires and throttle. The bike responded with a what-have-you-been-waiting-for? growl and showed me what it could do when the rider has a bit more confidence in his German-engineered motorcycle. When the traffic doesn’t interfere, watch out. 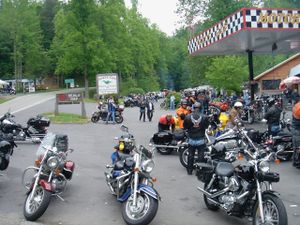 That evening was spent at Calhoun’s drinking beer and chatting with Dad and Tom. I wish Dad hadn’t been as busy during this trip, but I’ll catch him next time. Thanks to you and Sharon for the hospitality and the discussions.

Sunday’s ride back to Atlanta was delayed due to some technical problems with Tom’s bike, but after a couple of Harley dudes helped him sort those out, we were on our way. First, we hit the Foothills Parkway, were we met some more Harley dudes.

The sky was overcast, as it had been all morning, but we expected that to clear up anytime, much like it did the previous morning. We made it back through the Dragon within the hour, and my newly found confidence paid off. No, I did not keep up with Tom, but I did well, pushing myself like a runner might: just a bit more everyday to get stronger. I know I was smiling through all 318 curves. To prove I was there, Killboy took two pictures of me riding the Dragon. What a great idea. I plan on ordering copies of both shots; let me encourage my readers to do the same. There was a good crowd at the Gap.

The original plan was to take the Cherohala Skyway after gassing up in Robbinsville. However, we luckily ran into a guy riding a GS who let us know that the authorities had closed the skyway due to a motorcycle accident. According to the rumor, three bikes collided, and one of the riders had to have his leg amputated on the scene. I guess they didn’t want people driving past and seeing something like that. Well, we decided to have lunch at a local Mexican restaurant, and when we were finished, we walked out to rain. The rain has not stopped to this day.

Even though it rained on us the rest of the way, and my bike has been sitting in my driveway since my return, we had a good trip. I’m hoping that the rain god gives us a break soon, so I can get back in the saddle. I need to keep pushing myself, so I can get better. Now I understand the reason for paying a bit more for a BMW, but I’m glad it wasn’t my first bike. I think I’m growing into it well, and it will give me plenty of room for continued growth as long as I have confidence in my machine. Oh, did I mention my heated grips?