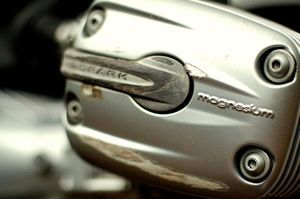 It’s bound to happen. Every motorcyclist I talk to, and every columnist I read say all motorcyclists are bound to have an accident. I had my first accident in June of 2005, and this one was very similar, except it happened on Mercer University Drive in heavy traffic after the sky rained enough to make the tarmac slippery. Traffic was crap, and this dude slammed on his breaks in front of me. I locked up the front wheel and went down. I guess I was following too closely for wet blacktop. Fortunately, I didn’t hit anything, and the guy following me stopped short of rolling over me. He even got out of his truck to help me lift up the bike. Thanks, man.

I'm sore tonight. My right knee is banged up; my right arm hurts, but there's no visible damage; my left hand has a little wound, even though I was wearing gloves; and my left leg has a bruise on the knee and the shin. If I had not been wearing my riding jacket, it would have been much worse. Yes, my BMW riding jacket rules: there’s not a scratch on it, even though I know it scraped the pavement.

Yes, it could have been a lot worse. The bike has a bit of damage—the windshield is scraped, as is the right head, the break lever, the mirror, and the grip weight. One of the metal rods that holds the shield is bent, so it’s lopsided now; it’ll probably have to be replaced.

I'm just happy to have made it home.