First, I have to say a huge thanks! to my brother Tim for donating his old, unlocked Motorola Ming to me after he got his new iPhone. And though I envy his iPhone like a homeless man staring at a lunch service, at least I have something to occupy me until I can — one day — achieve iPhoneness. 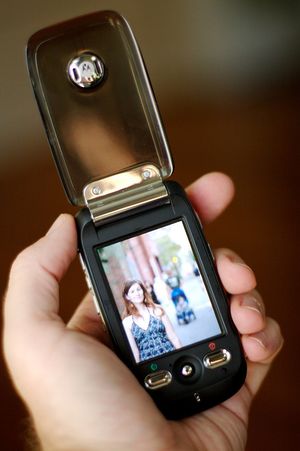 Still, it’s damn nice to have an unlocked phone. My biggest complaint about my RAZR branded with the T-Mobile logo (OK, maybe not my biggest) is that the only way to get content off the phone was to email it to myself at 25¢ a pop. (Goodness knows how much ring tones and various other content to put on would be. Never tried.) I know: it doesn’t seem too bad, but please. Why break a perfectly good phone for your greed, T-Mobile? I emailed an average of 10 pictures a month to myself, so add $2.50 to my already high cell phone bill; it’s all gravy for T-Mobile. I know: they are not the only corporate maggots hustling the public with ridiculous cell phone contracts, overpriced add-ons, and feature-starved broken phones. But, I digress.

I have already put all my contacts in (Windoze only — grumble), and used the Mac’s built-in Bluetooth to send ring tones that I made and photos that I took right to the phone, with nary an extra cent to T-Mobile. I could then assign them to individual callers. Cool. And, unlike my organizationally challenged RAZR, it keeps all contacts’ various phone numbers together under a single entry. Nice.

So far, I like it. I just wish Apple would support it with iSync.