More Midjourney play, and this time I tried some “selfies.” I tried to remix an image I made earlier based on my contact page photo—the one with the monorail in the background. I got one more out of that effort: 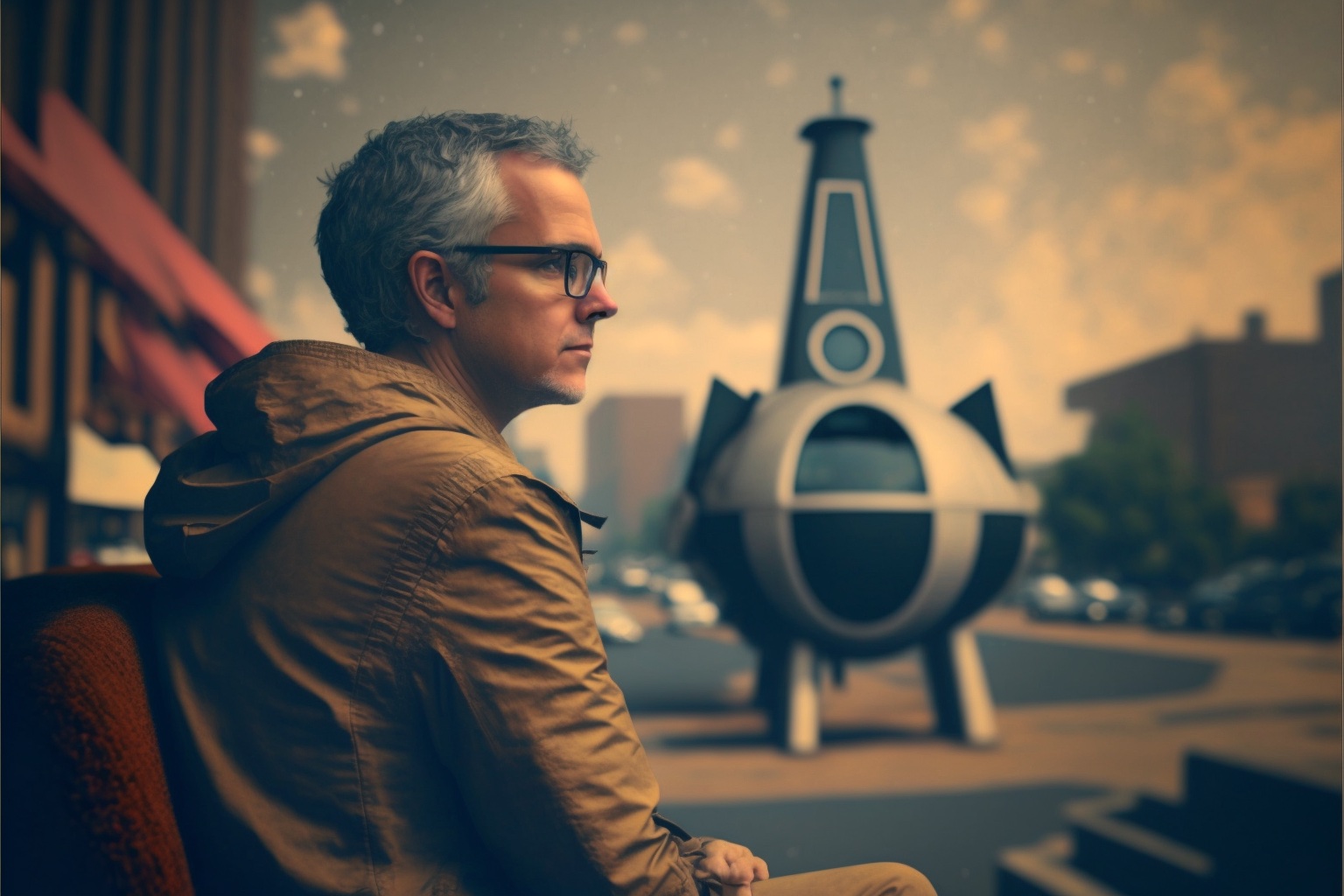 I know that’s not my profile, but the figure does resemble me otherwise. I wonder what that piece of tech is supposed to be in the background?

Next, I used another image I like for profile shots as the model image. I tweaked the description a bit, too, adding some cinematic and studio lighting. Here’s the best one: 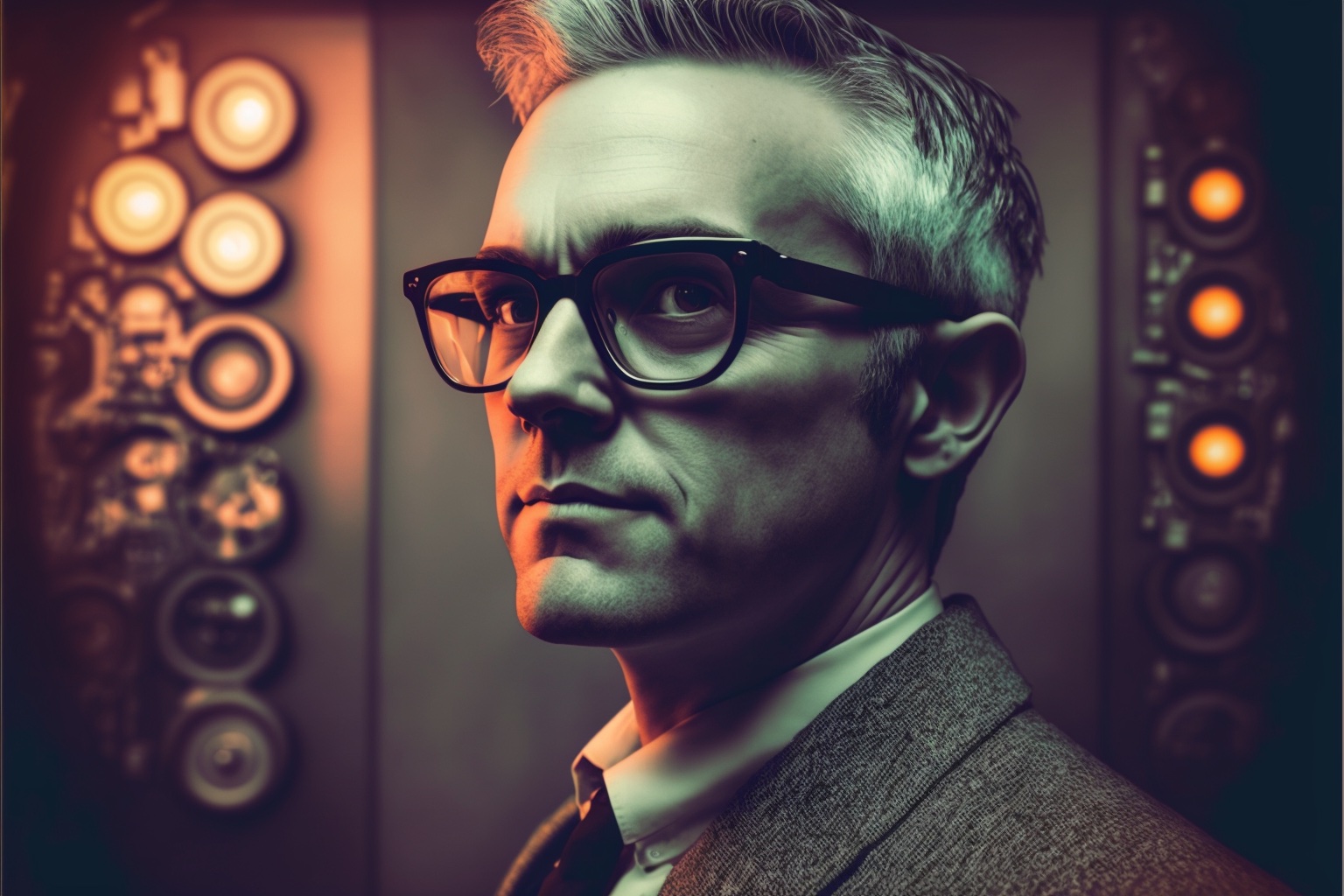 I really like the lighting and composition here; this image is my favorite so far and maybe the most accurate? Could I get away with using this as a profile picture? I don’t know. Also, I wonder why the AI put me on what looks like a Borg ship. Next, I switched models again to the profile shot I have for this web site and tried the same recipe. 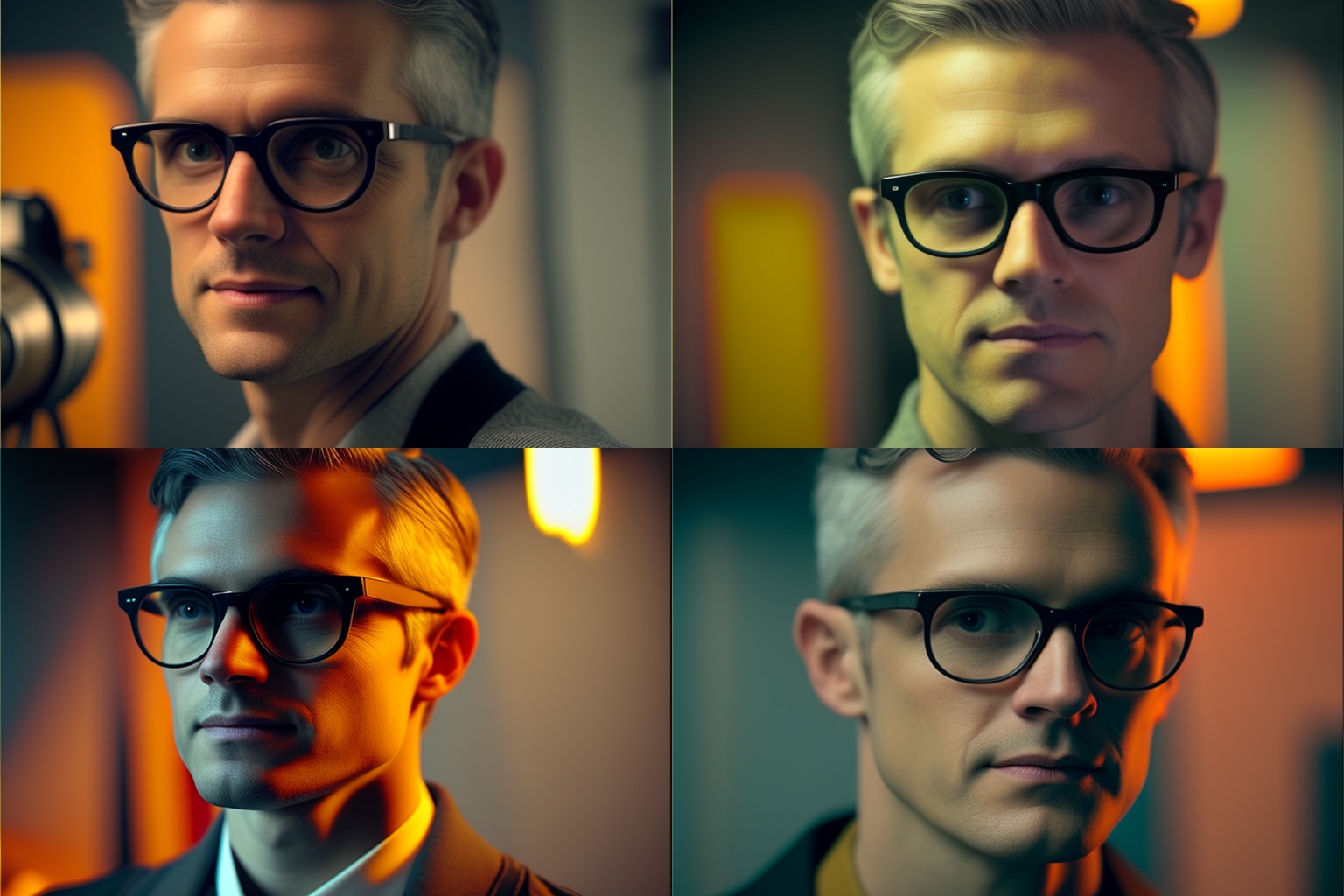 Can you say “movie star”? Again, while none of these is spot-on, they all at least resemble me. And I like that the AI also used the same background orange that’s in the original photo. Some details, like my nose and the general roundness of my face, are not accurate, but these faces might have a chance in Hollywood, whereas mine, well, wouldn’t. I like where these were going, but I wanted to try to include more body in the image, so I added this photo from my Mailer class in 2015. 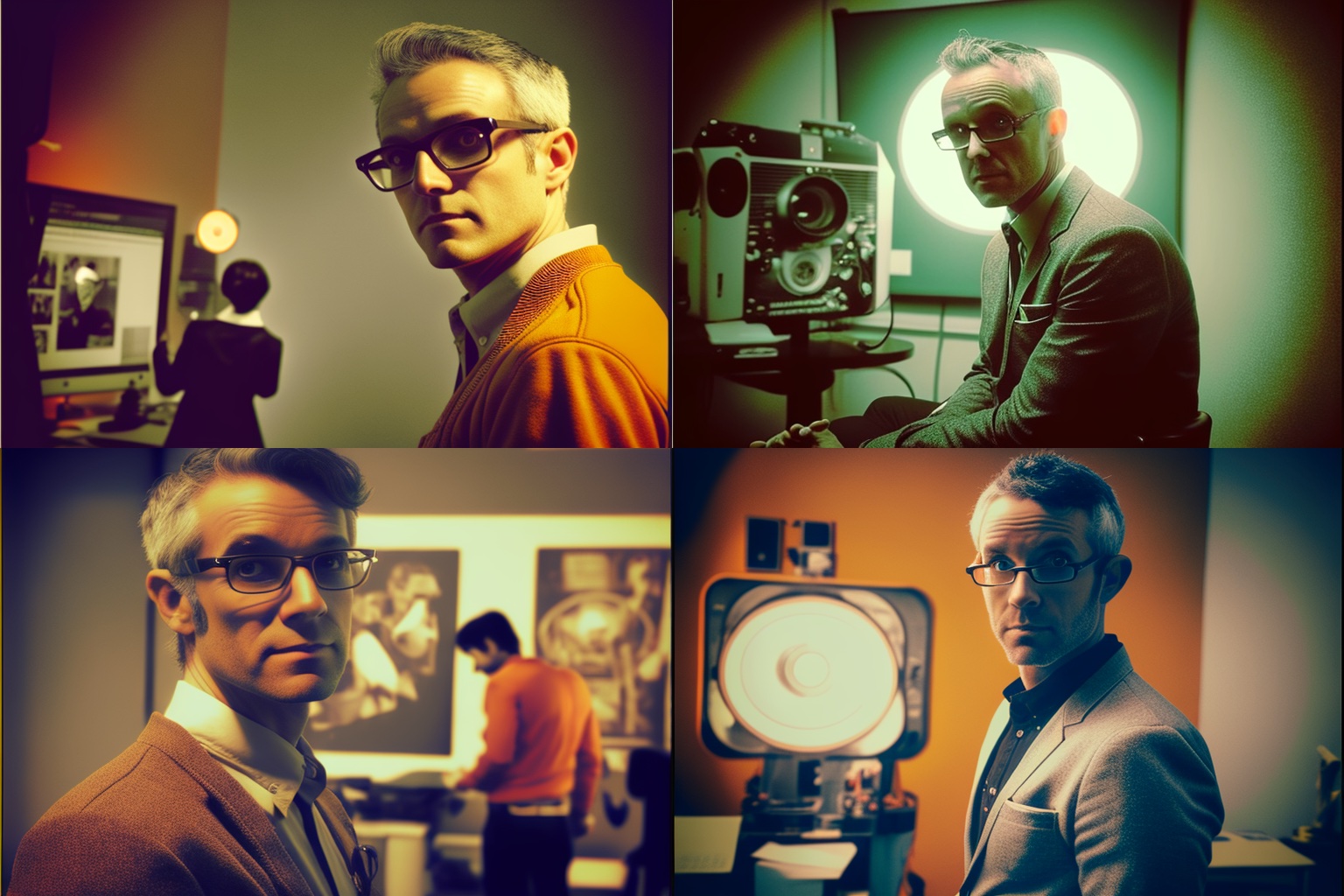 Notice that it again picked up on the color of my shirt in the original. It also added film cameras and lighting, I guess because of the screen behind me. Next, I added the keywords “professor” and “classroom” to get me out of the film production environment. That’s when the AI aged me up a bit.

Notice, too, that these are a bit more plain and the colors are muted. I guess that’s part of how the AI views higher education? I might have to play with that a bit more. Finally, I used the same images, but added “young” and “office” in there. There’s the best one from that render: 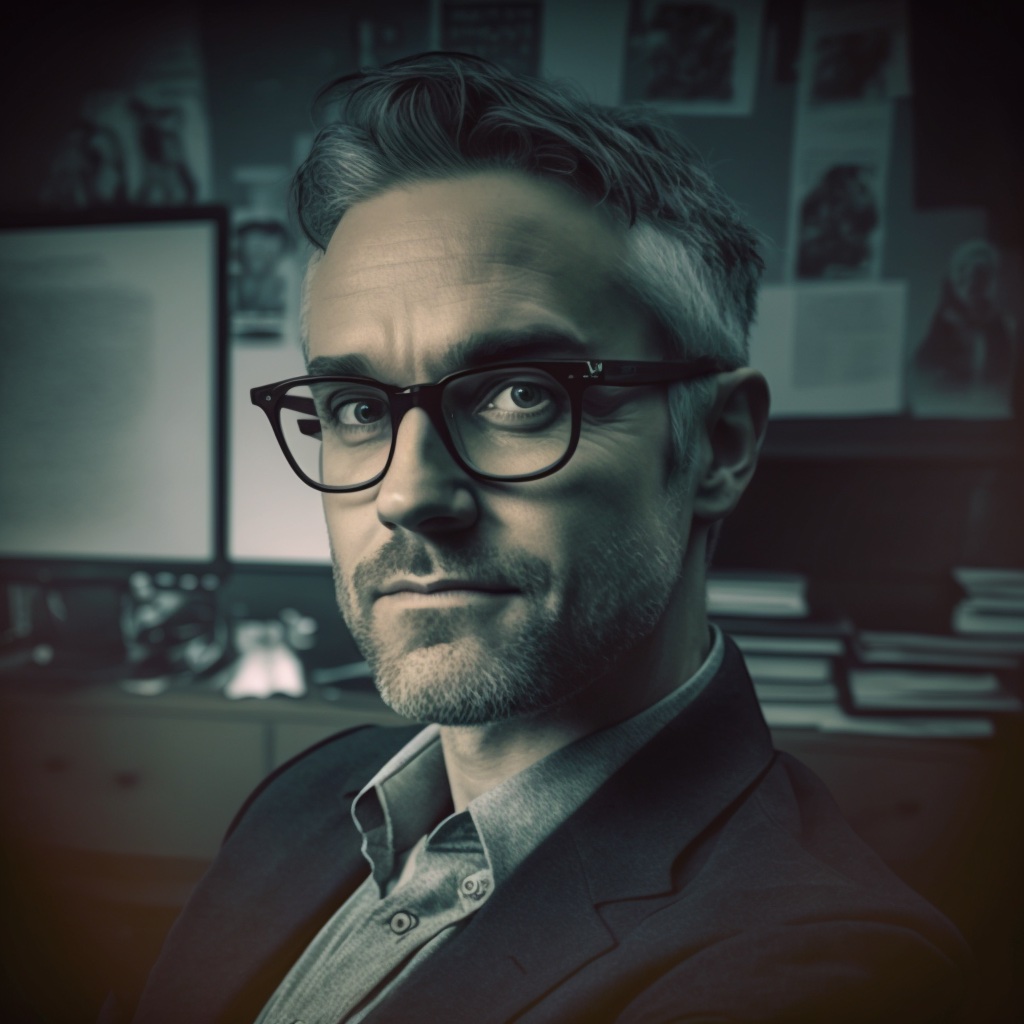 Much better! LOL! All of the above are realistic and detailed, but I may try to make one that’s a bit more “digital” for the image on DigitalProf site. Maybe one of me holding a Leica for Lucaspix. Hm.