I’m still playing with Midjourney, and boy it’s the rabbit hole. I haven’t run out of renders in the $10 package, but I bet I’m getting close. The next tier has unlimited renders, but it’s $30 a month, which seems a bit steep. Too bad I didn’t discover this before the winter holiday.

While I have tried several different compositions with as many subjects and styles, I wanted to make some original images for literary topics. What better topic than Homer? So, how about scenes from the Odyssey book 11, when Odysseus travels to the underworld. My first attempt was in the style of Zdzisław Beksiński, and my prompt was “Odysseus, the epic hero, carrying a sword and his men meet the blind prophet Tiresias in the underworld surrounded by the shades of the dead, in the style of Zdzisław Beksiński.” These were my favorites:

These are both pretty good, though I’m not sure what figure is supposed to be Odysseus and which is Tiresias in the second image. Similarly, this next rendering in the style of Arnold Böcklin has the same issue. Also, note how some of the figures run together in kind of a surreal, grotesque way. 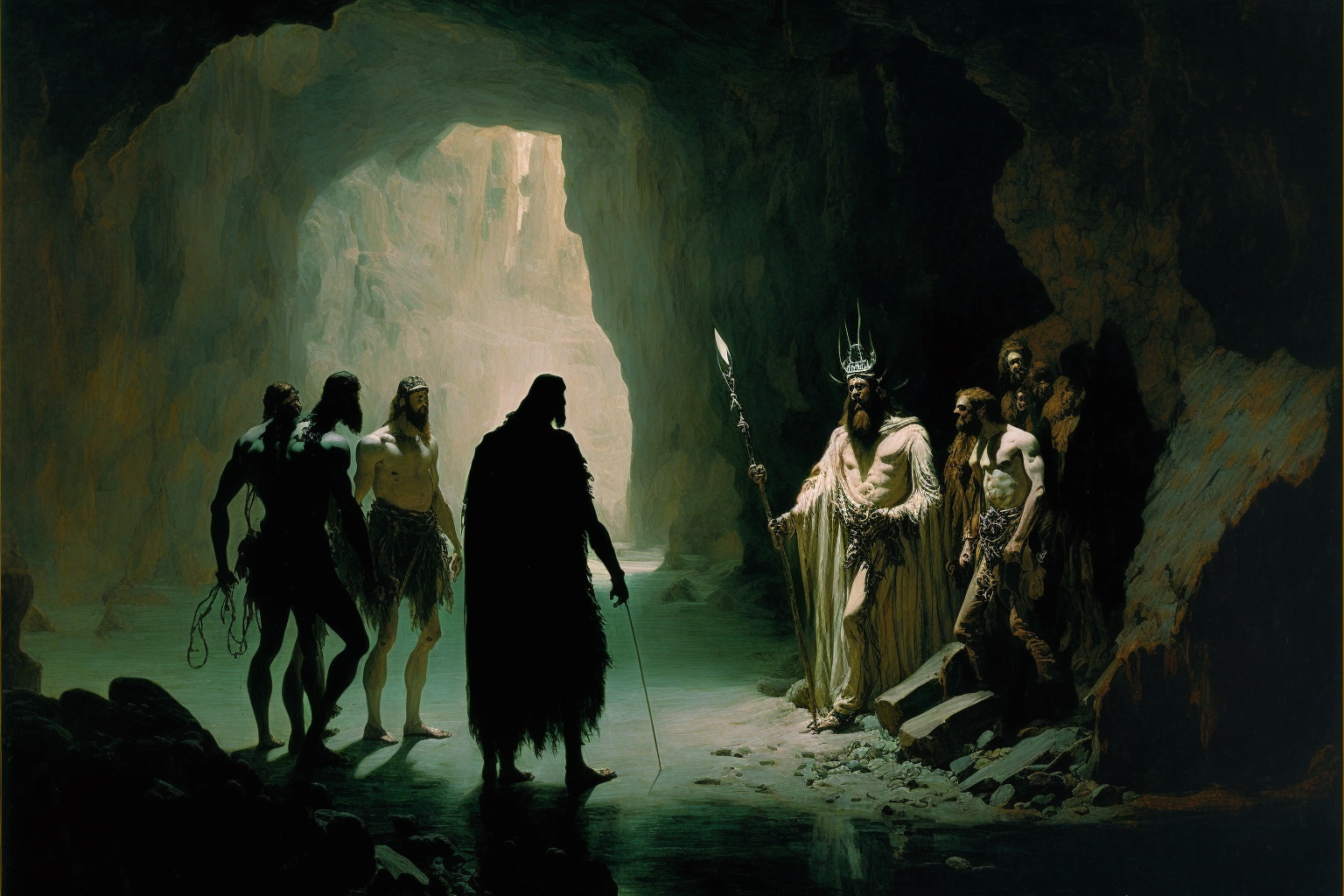 Next, I have one in the style of Gustave Doré. This seems an obvious choice, since he illustrated Dante. This one’s pretty good, though I wonder if those figures behind the ripped Odysseus are supposed to be shades of the dead or Odysseus’ sad crew. 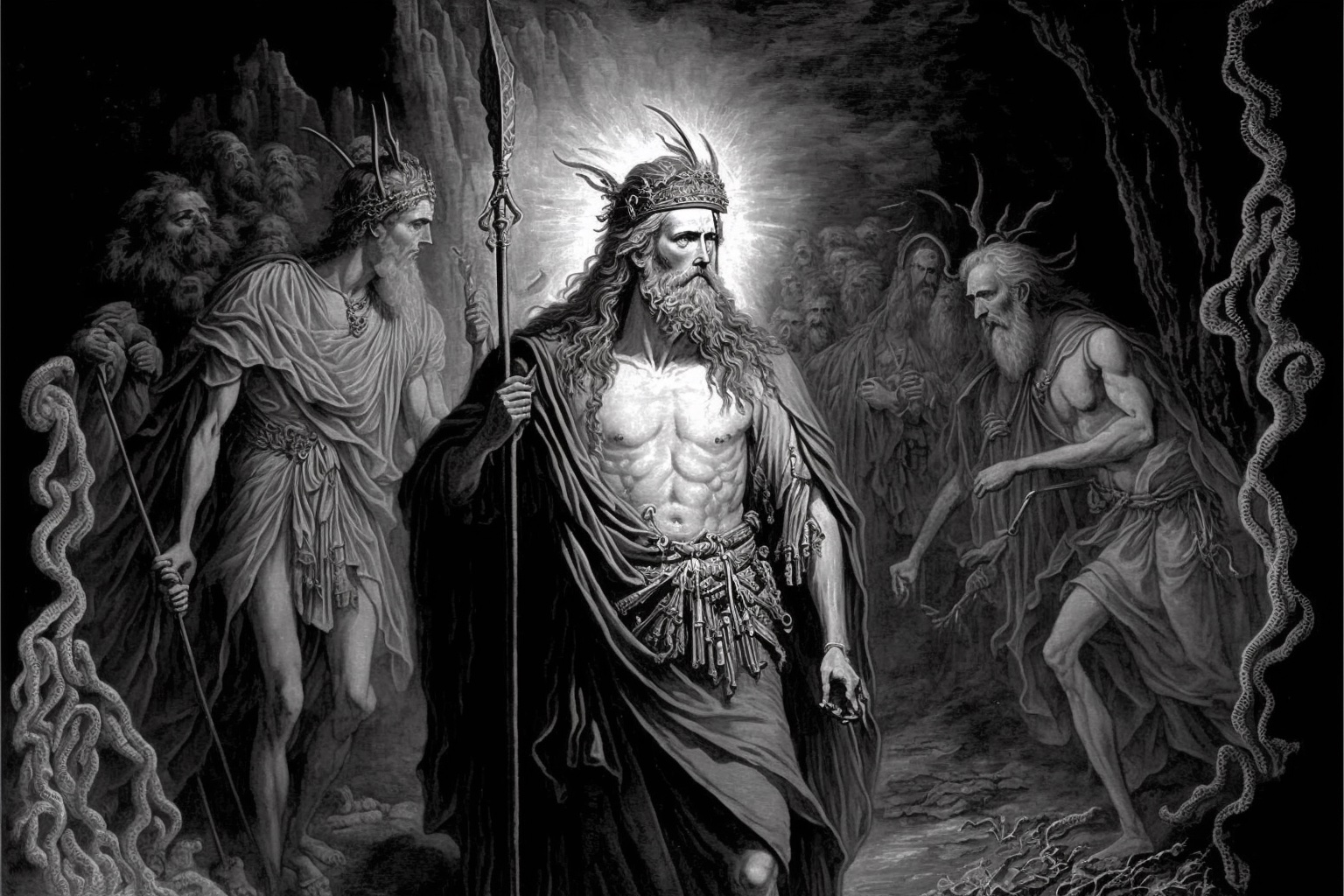 I also tried some photorealistic renders, based on daguerreotypes. These are interesting and moody, though not quite what I had in mind. This prompt might be worth tweaking some more.

Finally, my favorite is in the style of J. M. W. Turner. 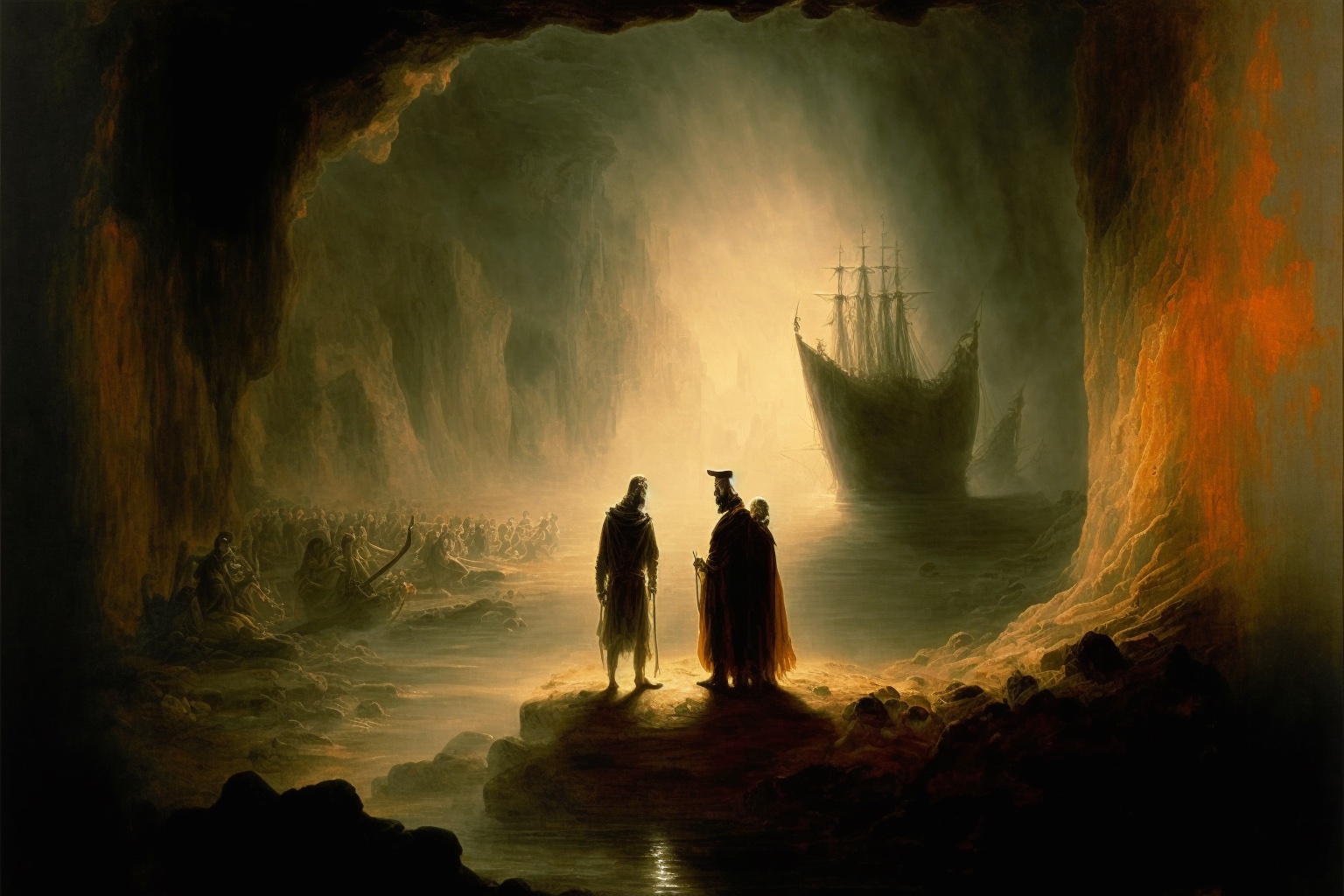 The ship is not quite right, but this is a great image. I need to try more in the style of Turner. I tried a couple in the style of “The Garden of Earthly Delights” by Bosch, but those were just odd—cool, but not the style I was looking for. Here are the low-res samples: 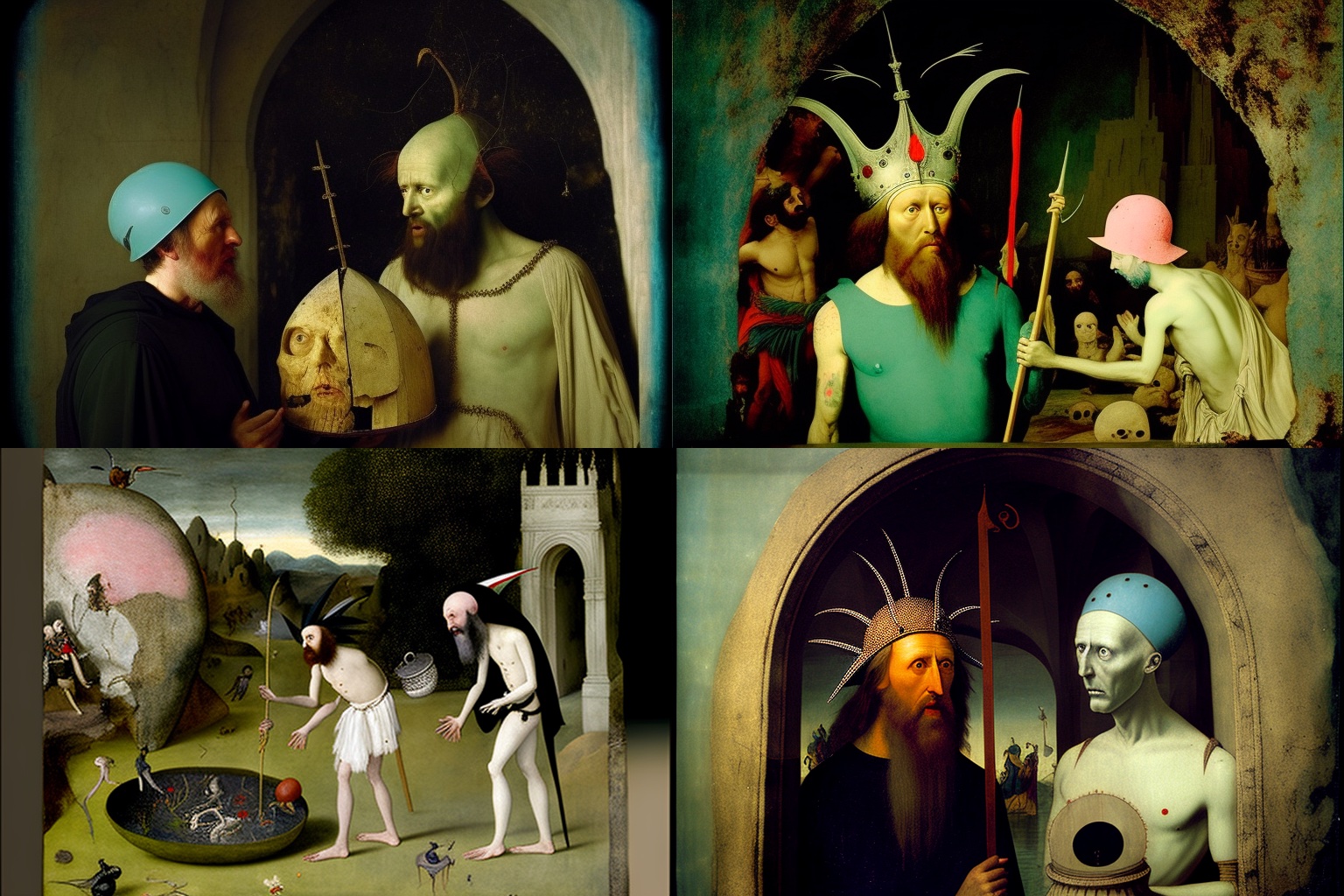 I was hoping for a larger landscape like the reference painting; maybe I need to begin with the “landscape” keyword.

OK, I should be working on my spring syllabi, but Midjourney is just so cool. I’m bound to run out of renders soon...

OK, I ran another upscale on a Turner-inspired image that had all sorts of glitches earlier. Here, it’s as excellent as the Turner-like image above. 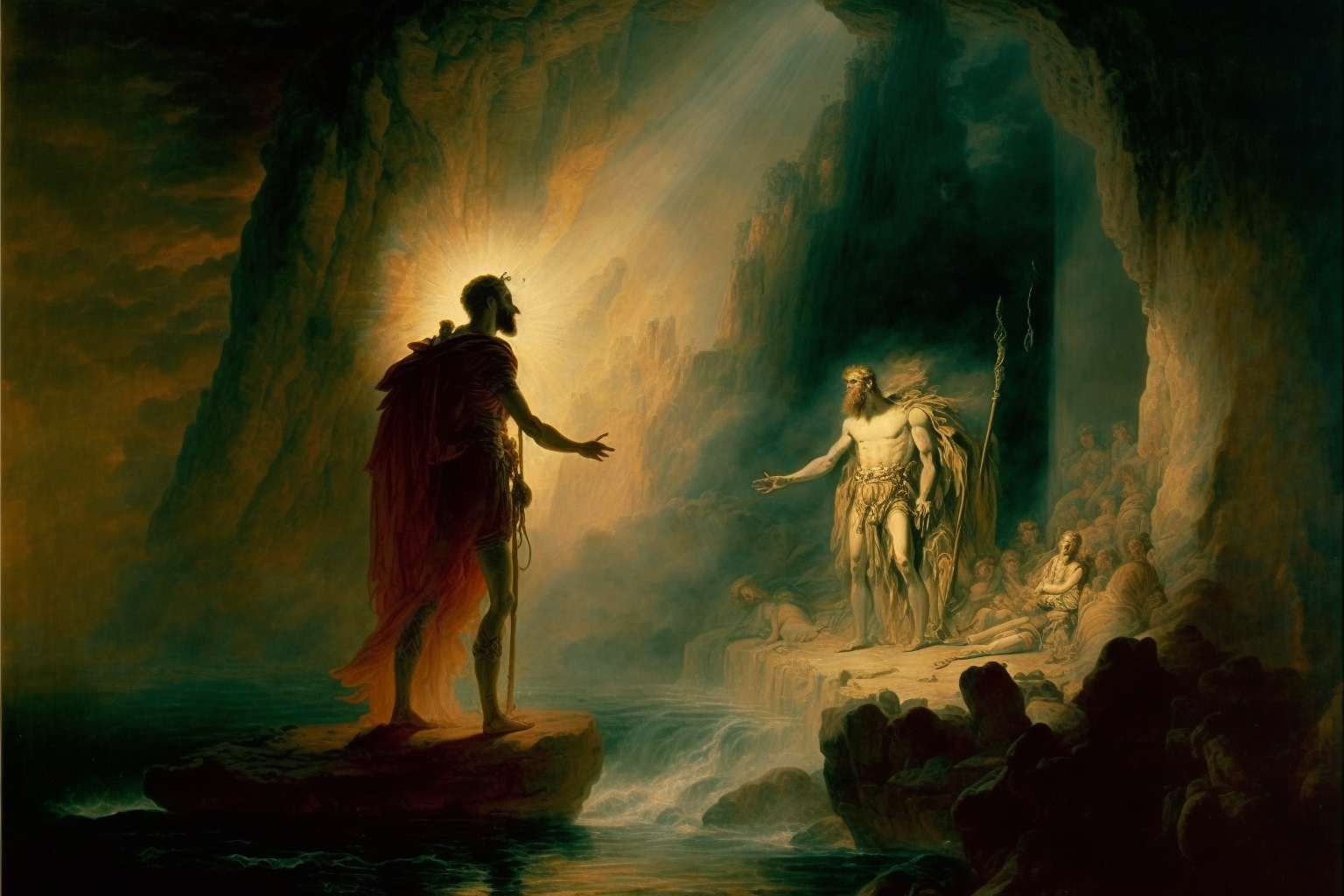 It’s so good compared to the original.