Any credulous study should begin by defining its terms. The most relevant term in this study is “epic.” What is an epic? 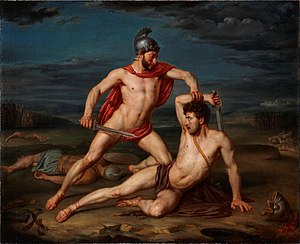 This question in itself is problematic. Did the unknown author of Gilgamesh sit down one day and state “Today I shall write an epic.” This scenario is doubtful and cannot present us with an archetypical denotation; therefore, scholars must infer a definition of epic from subsequent works that they themselves labeled as epics. According to Bakhtin, the genre epic is a fixed, unalterable form that is “absolute and complete.”[1] So, then, if this is true, a precise definition of epic should be easy. A few works are not debated by the academe as being representative of epics, e.g. the Iliad, the Odyssey, and the Aeneid. Logically, then, an examination of their shared characteristics should produce an accurate designation of the epic.

Traditionally, the epic is defined strictly as meeting the following criteria: a long narrative poem that has as its central concern a historic event, an heroic quest, or a legendary achievement that are a central concern of its culture; it usually develops as an oral tradition that has subsequently been written;[2] it has as its central character a hero that is of great national or cosmic importance whose actions profoundly affect his society and culture. Additionally, epics are written in a high style that begins with an invocation to a muse, the action is picked up in medias res, many poetic devices, e.g. the epic simile, are employed in which there are long lists of warriors, sacrifices, and sundry rituals, and is dramatic in form.[3] Since this study is based upon the literary epic, there are some supplementary details of importance that are relevant to the above epic models.

The setting is expansive, encompassing a world-wide milieu. The obvious exception here might be the Iliad; however, its participants are from all over the known, or relevant, world, thus making its characters representative of a world-wide community. The events include herculean deeds in battle, and the influence of, what the neoclassicists called “machinery,” gods and other supernatural beings. Finally, the “high style” of an epic is necessary to distance it from ordinary speech and less-significant matters that would interfere with the grandeur of the central themes and epical designs; for this reason I assume, there is a dearth of humor in the traditional epic for that would detract from the seriousness of its content.

Several twentieth-century literary scholars, including Mikhail Bakhtin, offer their own definitions of the literary epic to fit with a changing world. In his work The Dialogic Imagination, Bakhtin, already briefly quoted above, maintains that the traditional epic genre, contrasted with the novel, is antiquated and lifeless. The epic, he states, is a no longer flexible; it is but a skeleton of history, a dead language.[4] Bakhtin believes that the epic is an absolute part of history that a contemporary audience cannot touch and, therefore, cannot understand. The epic genre is no longer developing and cannot, therefore, encompass the concerns of our present society. Its rigidity as a genre allows no artistic expression in its fixed and antiquated form. Unlike reality which is in the process of unfolding and changing, the epic can no longer provide the idiom of reality in its “stilted heroizing,” unlifelike lyricism, and prepackaged and unvarying nature of its heroes.[5]

Bakhtin favors the novel over the epic for its plastic, still-developing heroes, its lack of unlifelike poetic prose, and its ability to realistically delineate the real world and its cultural concerns.[6] The novel, unlike the epic, is accessible to the contemporary reader because it allows a personal evaluation, rather than the sacrosanct, commonly-held point of view of the epic. The epic is a genre of tradition whereas the novel is fluid and open ended allowing new insights stemming from personal initiative.[7] These new insights are predictions of what might come in the future, a future that has not been written like the epic prophecy; the latter’s prophecy has already been written at a point in the absolute past, is part of cultural myth, and is known by everyone.[8]

Finally, Bakhtin discusses the novel’s uniqueness in that the reader can actually become involved in a novel—something not possible in an epic. Since there is no distance in the novel, one could begin living vicariously through the exploits of the characters, something that the epic distance makes impossible for readers of the epic. Since the epic hero has already realized his potential, “he has already become everything that he could become, and he could only be that which he has already become,” we have to admire him for what he has always been. Since the novel’s hero is ever changing and contemporary, the reader can respond to his/her plights and victories as if they were happening to the reader. Unlike the perfect fate of the epic hero, the fate of the novel’s hero has yet to be written, and this, states Bakhtin, coupled with his inadequacy is what makes him appealing to the contemporary reader and artist.[9] Novelization, concludes Bakhtin, liberates the artist and the reader from those genres that tend to limit his unique development.[10]

Bakhtin is ultimately concerned with the aspect of literary theory that is closest to the contemporary, closest to the hearts and minds of the artist and the reader. Through his concerns, he suggests that the novel is the superior genre to address the vicissitudes of contemporary life through its fluidity and plasticity. Yet, Bakhtin turns out to be as limiting as his definition of genres. He does not allow epic genre—or any genre for that matter—to also change with the zeitgeist. Is not the epic still vibrant and alive in the pages of a novel? Must the epics be separated by that “epic distance” that keeps it inaccessible to those of us who read them today? Has the epic spirit of Homer, Virgil, and Milton been lost in the annals of time?

E. M. W. Tillyard, in his work The English epic and Its Background, is not concerned as much with the traditional epic genre, but with what he labels the “epic spirit;” this spirit cannot remain rooted in an absolute epic past but must be colored by contemporary thoughts. Tillyard examines selected examples of epic literature, to the three I have listed above he adds the Divine Comedy, the Lusiad, and Paradise Lost, and derives from them the following criteria for the epic spirit: high quality and seriousness, inclusiveness or amplitude, control and exactitude commensurate with exuberance, and express the feelings of a large group of people.[11] To these he includes that the writer of an epic must be in contact with life and exert his/her will in order to produce the control and precision necessary to complete a holistic, epical work. She/he must be “at home in large areas of life, … centered in the normal, … measure the crooked by the straight, … and exemplify that sanity which has been claimed for true genius” (8). In other words, the author of the epic must reflect the current zeitgeist in order to effectively portray the feelings of a large group of people that he/she represents. In this criterion, Tillyard agrees with Bakhtin—the traditional epic form is a long, narrative poem—who reads long narrative poems in the twentieth century? No one but scholars and even we read prose translations of Homer and Virgil. Therefore, the long, narrative epic poem is part of the absolute past, but the epic spirit lives on.

In this respect the epic is a reflection about what is is like to be alive at a certain point in history.[12] However, the epic is expansive and may include in itself other genres, e.g. tragedy, that can account for its universality. Tillyard states that tragedy mirrors what it is like to be human, but the epic, while a product of a certain zeitgeist, is all-inclusive and should bespeak the human condition.[12]

Northrop Frye adds a personal element in his epic definition. He states that the crisis of the poet’s life is the fulcrum of epic concerns.[13] Therefore, Frye adopts a thematic definition for epic expression: the Iliad is a song of wrath in the destruction of a city, the Odyssey is a song of homecoming, and the Aeneid is a song rebirth and transformation initiated by the hero’s quest.[14] The successful completion of these themes is placed in the hands of gods; this contingency, and the realization of these themes, states Frye, is fully realized in the Christian epics.[15] This cycle lends the epic a unity, much like the unity that Tillyard discusses as one of his epic criteria. These themes, whether interpreted metaphorically of literally, are present in all epics and thus support Bakhtin’s idea of the cyclical nature of the epic.

Frye introduces the theme of gender in the epical tradition. He states that there is usually a woman, “an ambivalent female archetype,” that presides over the movement of the epic. She, like Penelope, acts as the fixed point of the compass and is usually where the action ends. Sometimes she is the goddess who begins and ends the epic cycle, like Athene in the Odyssey and Venus in the Aeneid.[16] This observation holds true for the three epics that I state above; therefore, they Frye’s observation seems accurate.

Finally, an extrapolation of a working epic definition is necessary before I can continue. A contemporary epic must contain Tillyard’s “epic spirit;” i.e. it must be of high quality and seriousness, expansive, illustrate artistic control, and remark on the concerns and feelings of the author’s society. In addition, the epic must be cyclical as far as thematic concerns and relevant to a particular point in time, but must be inclusive enough to transcend temporal and spatial boundaries and remark on the universal human condition. There must also be a woman who initiates or ends the epic cycle. Finally, if the novel form is inclusive, as Bakhtin suggests, then it can include the epic spirit and represents the perfect genre of the twentieth-century epic.

In all this discussion of the epic genre, the epic hero has not been mentioned more than briefly. What, indeed must the hero of our age be like? What qualities does our society feel are heroic? A hero should be representative of his/her society, someone of great importance. So what character traits should a contemporary epic portray? This question seems particularly in our day which seems to have a dearth of heroic types. Supposedly the President of the United States should be just such a hero. What traits would we like him/her to possess? This question is more readily addressed by approaching the concerns and feelings of our society.