I couldn’t help but be struck by the interesting re-telling of the Anglo-Saxon epic Beowulf, by Robert Zemeckis, Neil Gaiman, and Roger Avary. They kept the basic story intact, but added a twist with Grendel’s mother and more subtle characters. In fact, the theme of fatherhood in the time of heroes was nicely problematized: the screenplay dealt with the responsibility of the patriarch in a time of transition. The film (as is the original epic) is placed between the brutal time of heroes, when nations were trying to establish themselves, and the new belief offered by the “Christ God.” 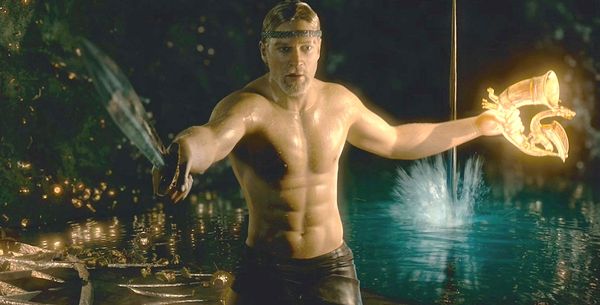 Beowulf is a Christ-like figure both in this revision and the original epic, sacrificing himself for the good of the people but not before, as Gilgamesh would say, his name was stamped on bricks. Yet, while he did vanquish Grendel in the film, he gave in to temptation as that young hero (you have to see the film). His attempt to atone for his sin as an older king does free his people, but brings down his son, and by implication, his way of life as well. With the death of Beowulf and his son (you have to see the film), the age of heroes comes to a close. A new king has been crowned and the old ones must pass into legend.

I’m reminded of the end of John Boorman’s Excalibur: Arthur kills his son Mordred, but sacrifices himself in the battle. Both Kings (Beowulf and Arthur) are left without heirs, so their reins must come to an end with their respective deaths. Both kings, too, are laid to rest on boats, but while Arthur is destined for Avalon and perhaps a return some day, Beowulf sinks beneath the waves as his ship becomes his pyre. Boorman and Zemeckis both tell the stories of the end of epochs—not the demise of patriarchy, but a change—perhaps with one superstitution being replaced with another.

Zemeckis’ film deals with the guilt of the father. The human women are chattel, as one would expect in an epic, but they are sympathetic and strong, demanding respect from the heroes. (There is a scene where one of Beowulf’s men—who we know is married—tries to have his way with a girl. She says “no” and struggles out of his grasp, delivering a final slap across his face before leaving. Cool.) Grendel’s mother is the most interesting: she is the demon of a heroic age (I can’t help but think of Circe, the sirens, Helen, Eve, Medea, Dido…) that has a magical influence over even powerful men. She desires a son, too, like a king—an heir to her kingdom. She represents disorder to the patirarchs Beowulf and Hrothgar, but she also has a potency that neither can resist.

The end of the film is fascinating. It’s a transition, but one that’s bittersweet and ambiguous. I didn’t think I’d like this film very much; I’m not a fan of the go-motion animation. However, this one is provocative and exciting, both in a viscreal and a thoughtful way.

It makes me want to go read Beowulf again.