Apollo and Daphne
By: Ovid from book 1 of the Metamorphoses[1] 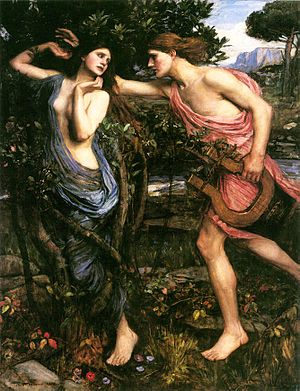 Now Daphne[2]—daughter of the river-god,
Peneus—was the first of Phoebus’ loves.[3]
This love was not the fruit of random chance:
what fostered it was Cupid’s cruel wrath.[4]
For now, while Phoebus still was taking pride 5
in his defeat of Python,[5] he caught sight
of Cupid as he bent his bow to tie
the string at the two ends. He said: “Lewd boy,
what are you doing with that heavy bow?[6]
My shoulders surely are more fit for it; 10
for I can strike wild beasts—I never miss.
I can fell enemies; j ust recently
I even hit—my shafts were infinite—
that swollen serpent, Python, sprawled across
whole acres with his pestilential paunch. 15
Be glad your torch can spark a bit of love:
don’t try to vie with me for praise and wreaths!”
And Venus’ son replied: “Your shafts may pierce
all things, o Phoebus, but you'll be transfixed
by mine; and even as all earthly things 20
can never equal any deity,
so shall your glory be no match for mine.”

That said, he hurried off; he beat his wings
until he reached Parnassus’ shady peak;
there, from his quiver, Cupid drew two shafts 25
of opposite effect: the first rejects,
the second kindles love. This last is golden,
its tip is sharp and glittering; the first
is blunt, its tip is leaden—and with this
blunt shaft the god pierced Daphne. With the tip 30
of gold he hit Apollo; and the arrow
pierced to the bones and marrow.[7]
And at once
the god of Delos is aflame with love;
but Daphne hates its very name; she wants
deep woods and spoils of animals she hunts; 35
it is Diana, Phoebus’ virgin sister,
whom she would emulate. Around her hair—
in disarray—she wears a simple band.[8]
Though many suitors seek her, she spurns all;
she wants to roam uncurbed; she needs no man; 40
she pays no heed to marriage, love, or husbands.
Her father often said: “You’re in my debt:
a son-in-law is owed me.” And he said:
“You owe me grandsons.”[9] But his daughter scorns,
as things quite criminal, the marriage torch 45
and matrimony; with a modest blush
on her fair face, she twines her arms around
her father’s neck: “Allow me to enjoy
perpetual virginity,” she pleads;
“o dear, dear father, surely you’ll concede 50
to me the gift Diana has received
from her dear father.” And in fact, Peneus
would have agreed. 0 Daphne,[10] it’s your beauty
that will prevent your getting that dear gift.
Your fair form contradicts your deepest wish.[11] 55

Phoebus is lovestruck; having seen the girl,
he longs to wed her and, in longing, hopes;
but though he is the god of oracles,
he reads the future wrongly.[12] Even as,
when grain is harvested, the stubble left 60
will burn, or as the hedges burn when chance
has led some traveler to bring his torch
too close, or to forget it on the road
when he went off at dawn, so Phoebus burns,[13]
so is his heart aflame; with hope he feeds 65
a fruitless love. He looks at Daphne’s hair
as, unadorned, it hangs down her fair neck,
and says: “Just think, if she should comb her locks!”[14]
He sees her lips and never tires of them;
her fingers, hands, and wrists are unsurpassed; 70
her arms—more than half-bare—cannot be matched;
whatever he can’t see he can imagine;
he conjures it as even more inviting.[15]
But swifter than the lightest breeze, she flees
and does not halt—not even when he pleads: 75
“0, daughter of Peneus, stay! Dear Daphne,
I don’t pursue you as an enemy!
Wait, nymph! You flee as would the lamb before
the wolf, the deer before the lion, or
the trembling dove before the eagle; thus 80
all flee from hostile things, but it is love[16]
for which I seek you now! What misery!
I fear you’ll stumble, fall, be scratched by brambles
and harm your faultless legs—and I'm to blame.[17]
You're crossing trackless places. Slow your pace; 85
I pray you, stay your flight. I’ll slow down, too.
But do consider who your lover is.
I’m not a mountain dweller, not a shepherd,
no scraggly guardian of flocks and herds.
Too rash, you don’t know whom you’re fleeing from; 90
in fact, that’s why you run.[18] I am the lord
of Delphi’s land, and Claros, Tenedos,
and regal Patara.[19] Jove is my father.[20]
Through me, all is revealed: what’s yet to be,
what was, and what now is. The harmony 95
of song and lyre is achieved through me.
My shaft is sure in flight; but then there’s he
whose arrow aimed still more infallibly,
the one who wounded me when I was free
of any love within my heart. I am 100
the one who has invented medicine,[21]
but now there is no herb to cure my passion;
my art, which helps all men, can’t heal its master.”[22]

He’d have said more, but Daphne did not halt;
afraid, she left him there, with half-done words. 105
But even then, the sight of her was striking.
The wind laid bare her limbs; against the nymph
it blew; her dress was fluttering; her hair
streamed in the breeze; in flight she was more fair.[23]

But now the young god can’t waste time: he’s lost 110
his patience; his beguiling words are done;
and so—with love as spur—he races on;
he closes in.[24] Just as a Gallic hound[25]
surveys the open field and sights a hare,
and both the hunter and the hunted race 115
more swiftly—one to catch, one to escape
(he seems about to leap on his prey’s back;
he’s almost sure he’s won; his muzzle now
is at her heels; the other, still in doubt—
not sure if she is caught—slips from his mouth; 120
at the last instant, she escapes his jaws):
such were the god and girl;[26] while he is swift
because of hope, what urges her is fear.
But love has given wings to the pursuer;
he’s faster—and his pace will not relent.[27] 125
He’s at her shoulders now; she feels his breath
upon the hair that streams down to her neck.
Exhausted, wayworn, pale, and terrified,
she sees Peneus’ stream nearby; she cries:
“Help me, dear father; if the river-gods 130
have any power, then transform, dissolve
my gracious shape, the form that pleased too well!”[28]
As soon as she is finished with her prayer,
a heavy numbness grips her limbs; thin bark
begins to gird her tender frame, her hair 135
is changed to leaves, her arms to boughs; her feet—
so keen to race before—are now held fast
by sluggish roots; the girl’s head vanishes,
becoming a treetop. All that is left
of Daphne is her radiance.
And yet
Apollo loves her still; he leans against 141
the trunk; he feels the heart that beats beneath
the new-made bark; within his arms he clasps
the branches as if they were human limbs;
and his lips kiss the wood, but still it shrinks 145
from his embrace, at which he cries: “But since
you cannot be my wife, you’ll be my tree.
0 laurel, I shall always wear your leaves
to wreathe my hair, my lyre, and my quiver.
When Roman chieftains crown their heads with garlands 150
as chants of gladness greet their victory,
you will be there. And you will also be
the faithful guardian who stands beside
the portals of Augustus’ house and keeps
a close watch on the Roman crown of oak leaves.[29] 155
And even as my head is ever young,
and my hair ever long, may you, unshorn,
wear your leaves, too, forever: never lose
that loveliness, o laurel, which is yours!”

Apollo’s words were done. With new-made boughs 160
the laurel nodded; and she shook her crown,
as if her head had meant to show consent.[30]