We seem to be in trouble.

On the way into work this morning, NPR had a small snippet about what the world will probably be like in 2025. When they say “the world,” they mean human affairs, of course. Well, the US has fallen from its mighty perch, being replaced primarily by southeast Asian countries. I assume they mean economically — as we can see that happening now. Despite the current grim outlook for multi-national conglomerates and corporations, they are expected to play a larger role in global issues, alongside organized crime. And terrorism isn’t going anywhere. Surprise there. 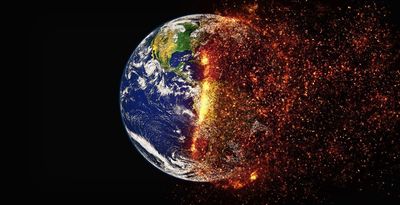 Oh, yeah, and we’ll be making our way toward more environmentally friendlier technologies and away from fossil fuels. They call this an “encouraging” aspect of the report. Well, according to Mark Lynas’ book Six Degrees: Our Future on a Hotter Planet, that will be ten years too late to avert a potentially catastrophic shift in climate change. And we seem to be still oblivious. From his conclusion:

Based on our current political concerns, I would have to agree with his less-than-optimistic prognosis. For example, the current economic crisis in the US has many once-mighty companies struggling, including the Big Three car manufacturers. Well, I can’t claim to understand the reasoning behind any of this economic bailout business other than it seems to be one guy in the Bush’s administration with a lot of money that big corporations “need” to prosper. It just doesn’t make any sense to me. Also what doesn’t make any sense is the idea that more money given to these ailing car manufacturers (that can’t seem to make anything close to competing with Japanese and German companies) is a good idea without oversight. I think Michael Moore has it right.

Why can’t part of the bailout stipulate that these guys have to revolutionize their industry — maybe even by resurrecting something that you teased us with back in the 1990s. I know, I can already hear the arguments. Save ’em. As Lynas suggests, we need drastic measures here, both if we want to save our economy and our planet. Business-as-usual will be the likely death of us. All of us, even those at the top.

I’m reminded of a point Al Gore made in An Inconvenient Truth. Many who argue against the reality of global warming will contest it for economic reasons: it just much more comfortable, convenient, and cost effective to practice business-as-usual. Gore shows the absurdity of this balancing act: gold bars on one side of the scale; the whole earth on the other. Yes, the gold bars will potentially help us now practically (though I have my doubts), and they are a powerful symbol for the mythical might of this country. Yet, without the planet that we live on — you know, the only one we have — economics, and all those other important issues that occupy our energy and attention — will all be irrelevant. The death of the planet trumps them all. Period.

We need to wake up and pay attention. We are in big trouble.