Southern Baptists, Norman Mailer, and Me
My journey as a new academic into the South for my first teaching job. Norman Mailer came with me.[a]

It began with a beer.

OK, that's not entirely accurate: first I had to earn my Ph.D., get a tenure-track job, find a place to live, and move to Macon, Georgia—about 80 miles south of Atlanta. It was the summer of 2002, and the next phase of my life was beginning. Though I had fond memories of graduate school in Tampa, it was time to begin the journey toward maturity. After accepting my position at a small college in Central Georgia, I began searching for a place to live. During my search, I met realtors, apartment complex managers, and landlords—all of whom asked me the same thing: “where do you go to church?” This question has reverberated through my life ever since. 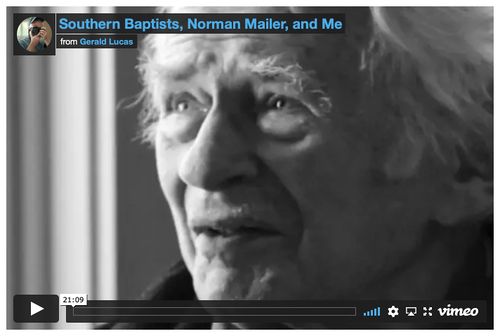 Growing up in Florida, I never heard anyone ask this question, and I never asked it. Even though I was raised Catholic, until, as George Carlin says “I reached, the age of reason,” I was taught that religion was a personal decision that helps guide us in everyday life, but something that should be kept out of politics. Religion was something for church, the before-meal head bowing, and my heart. This silence about religion was profound: it was a weighty silence that kept me in-line and unquestioning. Indeed, if we never talked about religion, we couldn’t question it.

However, this place where I was moving—the new nexus of my personal and professional life—seemed to have the opposite view of religion. Southern Baptist is the religion of Central Georgia, and their practice of it is a bit more overbearing than the Catholicism of my childhood. It seems to command silent devotion through dicta, commandments, and imperatives that it proudly displays on church marquees, road-side signs, t-shirts, and bumper stickers on half-ton trucks and SUVs. As if to remind all citizens of God's profound omnipotence, pithy sayings of His order are displayed liberally around town and the countryside, as plentiful as—well, as churches in the south. These signs demand obedience, threaten punishment, incite anxiety, and remind us of our place.

As a symbol of the wealth, power, authority, and supremacy of God, cathedrals used to be built at the heart of a town, symbolizing the importance of God the center of the community. These imposing structures spoke of the greater glory of God, took lifetimes to construct, and stood as watchful reminders to citizens to behave themselves. The people's life-long investment to the construction and support of the cathedral assured their loyalty to the community, to the state, and to God. Today in the South, the literal cathedral has been replaced with a figurative one: the architectural dominance of the cathedral is now a bazaar of smaller, cheaper, and decentralized expressions of right.ﾠ

However, while the centralized ideology remains the same, the practice is not: churches seem mostly segregated affairs where class and race rarely mix. A heterogeneity is maintained in isolated packets of devotion—the rich and white attending their stucco and steel structures surrounded by a sea of parking lots, while the lower-class racial minorities seem to attend rural churches that are little more than double-wide trailers at the end of dirt roads. Yet, despite these ostensible differences in class and race, the Baptist church keeps its flock under the same aegis of devotion that does its best to ignore racial and social inequalities. Discussion of devotion, belief, and faith is encouraged; questioning is ignored, frowned upon, or silenced. In order to avoid confrontation, Southern Baptists seem to think that these annoying realities should be kept in the closet, much like homosexuality, women’s rights, and education beyond high school.

Before moving to Macon, I was introduced to the writing of Norman Mailer. In most of his writing, I discovered an iconoclast who seemed to speak as the creative conscience of the American people. A hard-hitting conscience, he wasn’t about to let us get away with any self-deception in what's important. Nothing was too sacred for his pen: the American dream, our involvement in war, our right to control our own destinies, our responsibilities as citizens, and our creative potential.

Shortly after 9/11 and the American invasion of Iraq, I thought that America was like Dante in his dark wood, about to enter Hell. I seem to have found a kindred spirit in Mailer. His 2003 book Why Are We At War? posits that America was going through an identity crisis, and a new breed of flag-waving American conservative was leading the battle cry into Iraq. This battleground was the beginning of an international crusade to define ourselves anew as a world empire. The goal, Mailer argues, is to morally reform America.

So shut up. Do not ask questions. Do not listen to those who ask questions. Keep your mind on God and the moral cleanliness of the USA. This call for silence seems like the philosophy of the Baptist South writ large that I encounter daily as a college professor in Central Georgia.

Mailer observes that a flag-waving love for America springs from a like religious devotion.[2] Freedom and democracy is what's at stake here; indeed the former is an integral component of the latter. Totalizing views demand an uncritical devotion, a surrender of rights and freedoms, a rebuking of dissent or suggestion of the new or different, a silencing of individuality. Ironically, those who publicly claim to be the most American, the most patriotic, the most devout seem in practice to be the ones who are most inimical to democracy and freedom.

We all must beware of totalizing tendencies in our own practices. While I’m being critical of many groups of people here, my daily experience is that many who ostensibly belong to such groups are not determined by them. I have met many Baptists, conservatives, and Southern white gentlemen that do not fit an easy typification, but are thoughtful and generous people that struggle with complexities of living in America—the kind of people a democracy needs.

Democracy, it seems to me, depends on two freedoms above all: participation and education. Participation must be active, deliberate, and gregarious. It takes place on street corners, bars, and coffee houses. It involves a practice of inclusiveness and a generosity toward others, regardless of their skin color, sex, or economic conditions.

Church and our current state also demand a participation, but it seems to be a passive one. Growing up, I went to mass every Sunday. Yes, it's a gathering of people, but we’re all automatons sitting, standing, kneeling on command, mouthing the same prayers every week, like machines in a factory. After church, we go home and watch TV, apart from others, in the security of our castles that we work hard to build, afford, and maintain. This is the kind of participation that keeps us easy to control—participate passively by remaining silent, so you might keep your freedoms, your job, and your house.

We must move out of the house to participate. The classroom is where active participation likely begins—through education. Mailer states that “When we think we’re nearest to God, we could be assisting the Devil.”[3] Through education, by openly and critically engaging these important issues that effect our everyday lives, can we learn the importance and the necessity of participation in our community. By reading fiction and non-fiction, can we discuss the complexities of life and develop a critical and creative capacity to support a delicate democracy, for

Soon after I moved to Macon, I had my first experience with a southern penchant for silence and devotion. I was dining with an out-of-state friend at a local restaurant, and we were engaged in an animated conversation about students, teaching, religion, politics, and other issues throughout the evening. The next week, I was summoned to the Dean's office along with my department chair. She had received a letter from a local attorney that accused me of being a vulgarian and questioned the appropriateness of allowing me in a classroom. After being admonished, I walked back to the department with my chair. We were silent for most of the way until he finally said: “Welcome to the south.”

That was four years ago. And while I have not had a similar incident, I do continue to speak of politics and religion in public, but more importantly, also in the classroom. Even though many a student evaluation suggests that the classroom is an inappropriate forum for these topics, it's my duty as an educator to present alternatives and ask questions. I also respond to such criticisms by assigning more Mailer.

In my recent reading Mailer and Lennon's conversations in On God, I took away a general lesson. Even in his thoughts on metaphysics and the afterlife, Mailer was, in the words of Don Delillo, a "writer in opposition.”[5] In his life and his work, Mailer “was not just a voice, but a force-chronicler, participant, and provocateur.”[5] Indeed, the first and only time I ever met Norman Mailer I told him where I live and teach. We discussed the South in a general way, and I asked him which of his novels he would teach in my Central Georgia classroom. He thought for a moment, and turning to me with a glint in his eye, said “teach my new one: it has something in it to piss everyone off.”

Well, what about that beer I started with? Another fact of life in Georgia is that citizens cannot buy beer on Sunday. To me, this seemingly trivial blue law stands as a testament to the totalizing religious and political South. It's an annoying weekly reminder of my place in the Baptist South and the control that these forces have in my life. Yet, there is an upside to this law: it only imposes on package stores, not restaurants, so my friends and I make it a point come together on Sundays, and over a beer or two, we discuss students, teaching, religion, politics, and other issues.

We just don’t do it too loudly.

The following photos and videos were either used or considered for this film. Most are licensed by a creative commons license, but if I use an image of yours illegally, please let me know so I can remove it.