The theme of friendship is remarkably significant throughout Gilgamesh. Yet, like everything else, friendship is subject to impermanence and death. Friendship, or companionship, represents the motivating force behind Gilgamesh—in fact, it seems that friendship is what makes life worth living and adventures worth taking. This friendship manifests itself as a male-bonding completion-of-self between Gilgamesh and Enkidu. This nouveau friendship is without the deleterious intervention of women who take on a rôles primarily as distracters and tempters who occasion the loss of innocence and destroy a man’s contact with his unworldly, adolescent self. 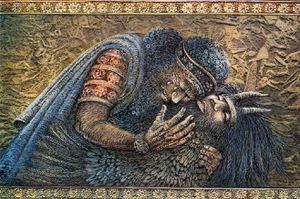 Before their meeting, Gilgamesh and Enkidu lacked direction and purpose; Gilgamesh (“god and man”) was indeed the King of Uruk, but his life was lacking the passion and freedom that Enkidu (“animal and man”) could provide. Enkidu, wild and quixotic— “ignorant of oldness,” was ignorant of civilization, Gilgamesh’s old civilization. The latter was tamed by the wiles of a prostitute and convinced to seek his fortune in Uruk. Like the meeting between my closest friend and I, Gilgamesh and Enkidu were, at first, at odds, each threatened by the other. Yet, their altercation led each to see that they needed each other, “And he saw himself in the other, just as Enkidu saw / Himself in Gilgamesh,” to be entirely human. Now that they had each other they could begin their adventure: life; now that they were both complete, they could face anything together. Enter Humbaba.

Humbaba the evil. Humaba the tempter. Together Gilgamesh and Enkidu can overcome Humbaba, yet alone they would both be doomed. Strongly allegoric, Humbaba represents all of the ills that threaten a friendship: everything from work to lung cancer. Sometimes the friend can only watch, “[Gilgamesh] stood still watching as the monster leaned to make / His final strike against his friend, unable / To move to help him,” while other times he can act, “Enkidu feared his friend was weakening / And called out: Gilgamesh! Don’t trust him!” Together, states Gilgamesh, “we outgrow our naïveté,” but the price of this experience costs Enkidu his life and Gilgamesh his peace.

This experience is also manifest within her. The woman represents an end to innocence, an end to naïveté. At one point Enkidu, dying from his wound, calls out: “Because of her. She made me see / Things as a man, and a man sees death in things. / That is what it is to be a man. You’ll know / When you have lost the strength to see / The way you once did.” The woman to Enkidu is what education has been to me, i.e. a double-edged sword: it has marked the end of my innocence and the beginning of my life, yet with the beginning of life there is also the existential awareness of one’s own mortality. No more running free and capricious with the animals—now there is harsh reality which attempts to obfuscate life with grim pictures of death. For Enkidu this death is literal, but for Gilgamesh it is figurative in that he has lost a part of himself with Enkidu’s death.