I hope that you and your Bride made it safely back to your new home. I saw the enclosed cartoons today and they reminded me of you. 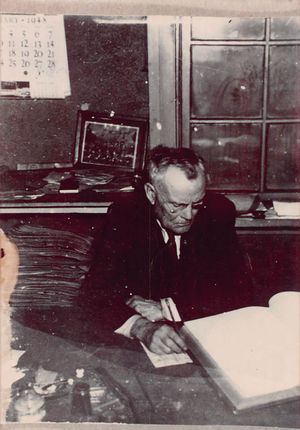 Also enclosed is the photograph of your grandfather, William Dote Lucas. As the calendar on the wall indicates, the photo was made forty-seven years ago, in January, 1948. In addition to the calendar, the photograph shown behind my Dad is a photograph of your uncle Elwood’s B-24 bomber crew. The photo also shows the basic reality of Dad’s office. It was a little less than glamorous. I recently visited a small courthouse in a little town in east Tennessee and the smell reminded me of the countless trips I made to Dad’s office. The mixed odor of tobacco and urine are easy to detect and hard to forget.

W.D. Lucas, with the help of his Madam Queen, definitely passed a long some traits to their offspring. In addition to the physical resemblance to him, all his children share another characteristic. Dote passed along an admirable work ethic to all of us. In reading his diaries, you can not overlook how hard he worked. He routinely worked a ten hour day, six days a week and often went into the office on Sunday afternoon to “catch up”. In doing so, he walked at least two miles per day, but in good weather he walked four miles per day because he came home for lunch. In 1953, a year before he died, he fell and broke a rib. The doctor wrapped his chest in tape, gave him some aspirin and told him to stay in bed for a couple of weeks. He did rest for the remainder of that day, but went to work as usual after that.

He was elected by the people of Lee County to serve as tax commissioner 32 consecutive years, 8 four-year terms. He was a Republican in a county that had a strong majority of Democrats. In the two elections I remember, 1948 and 1952, he not only won, but he also received the most number of votes of all the candidates running in those elections.

His longevity in office made him an authority on the Kentucky taxation process. He was invited, in 1951, to address the Kentucky Legislature on certain elements of the state & county taxation system. He spoke at two school assemblies while I was in high school. Once about government and the other time about the history of Lee County and the state of Kentucky.

But, the hard work paid off. At the time of his death, after 32 years of absolute, total dedication to his job, the commonwealth and county paid him a gross income of $200.00 per month!

Although he never owned a car, I remember once asking my Mom what first impressed her about Dad and she said, “He had a pretty horse.”

He was interested in history and spent a part of every day catching up on current events. Even with a painful eye problem in his last years, he read two newspapers a day, The Louisville Courier-Journal and the Lexington Herald. He also read and wrote a column for the weekly Beattyville Enterprise. He tried, always, to be home in time to listen to the daily radio broadcast of the Dan Rather of that day, Lowell Thomas. He knew what was going on and had informed opinions about all of it. He was intelligent, witty and disciplined. Fine man. He died over 40 years ago and I still miss him.