The Role of Myth in the Ancient Epics

The epics were crucial to Greek civilization. Not only were they the chief relaxation for the Greeks in the early period, but they also performed for preliterate Greeks a number of functions that were essential to their survival. Later, they were to live on a strong element in the art and literature of the western world. For these reasons, it is appropriate to stop here to examine in some detail the nature of the Greek epics and to discuss the greatest of the bards who composed them—Homer. 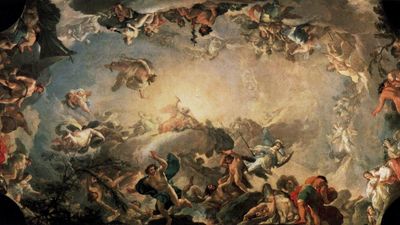 To the Greeks, struggling to regain a lost glory, the epic songs were entertainment, inspiring history, reminders of a time when to be a Greek was to be strong, brave, noble, and capable of prodigious achievements. They were also lessons in noble and ignoble conduct, and repositories of tales on the ways of the gods. Thus, the bard imparted instruction while he gave delight. The legends were only a framework to which he added extemporaneous elaboration, designed to fit the needs and temper of a specific audience. Over the years, succeeding generations of bards evolved a technique which depended heavily on a very large number of standardized forms. There was, first of all, an established outline for each legend and a cast of characters whose names and personalities were always much the same. There were also set descriptions for certain recurring places and events, called epithets, including conventionalized figures of speech. Bards used a huge stock of phrases that fell automatically into verse: “wine-dark sea,” “long-shadowing spear,” “death that lays at length,” “rosy-fingered dawn,” “brazen sky,” “windy Troy.”

The epic drew on several kinds of legends or myths: some concerned with gods, others with gods and humans, and others with humans alone. In the Dark Ages, when bards first began to perfect them, myths offered a way of answering hard questions about human nature and the universe for audiences unable to consider these matters scientifically. The myths made abstract ideas comprehensible by presenting the ideas as they affected real people caught in recognizable events.

The myths concerned with gods were intended primarily to explain religious matters, such as the changes that occurred when one set of gods was displaced by another. The substitution of the Greek gods on Mount Olympus for the old Minoan gods is explained, for instance, by the myth which tells of the brutal struggle between Zeus, ruler of the Olympian gods, and his father Cronos; Zeus finally overcomes his father and throws him into Tartarus, the ancient Hell.

The myths of the gods also addressed many matters other than those directly concerned with the gods’ personal genealogies. Sometimes they explained how and why the gods controlled nature. The changing seasons are accounted for in the myth of Hades, god of the underworld, who falls in love with Persephone, the daughter of the earth goddess Demeter, and carries her off to his kingdom. While Demeter grieves, no crops grow, whereupon other gods intercede with Hades, who finally agrees to let Persephone leave the underworld and spend part of the year with her mother.

In other myths, human actions are explained. The Oedipus legend concerns a phenomenon familiar to us: the unconscious desire of a boy to supplant his father in his mother’s affections. And many myths about gods and men also point to a moral: Bellerophon acquires a winged horse with the help of the gods, and beaming with pride, he tries to fly it up to Mount Olympus. For his presumptuousness, he is thrown off and maimed, and wanders alone for the rest of his days. Tantalus, greatly favored of the gods, is made to suffer eternal hunger and thirst because at a dinner for them, he served the flesh of his own son.

Still other myths about men are really established versions of history. They are full of action and crisis, violence and suffering, and are amazingly varied in theme. The Greeks refused to shrink from any subject, no matter ho fearful or horrible, and they cared little for happy endings, preferring instead to hear of courageous men who are doomed to be overcome by catastrophe. Very likely these tastes were molded by the hard conditions of their own lives. Among these doomed mortals is Agamemnon, the conqueror of Troy, who is killed by his own wife Clytemnestra, who in her turn is killed by their son Orestes. Heracles, most prodigious of heroes, kills his wife and sons in a fit of madness, and later dies himself in torment. Ajax, a leading warrior in the siege of Troy, goes mad because he is not awarded Achilles’ armor when Achilles dies, then kills himself in shame over his behavior.

The myths also contain touches of fellow feeling and even romance. Perseus rescues Andromeda from the Kraken, a sea monster, at the end of the world. Alcestis offers to die in place of her husband Admetus when his life span runs out; Admetus accepts her offer reluctantly and tearfully, and gives her a magnificent funeral. Most myths are full of anecdotal detours that are replete with bits of traditional lore that have little or nothing to do with the main message, but are nevertheless important adjuncts to that message. Like all folk tales, these anecdotes had an immediate appeal and helped to keep the audience attentive and receptive. But unlike much folk wisdom, which is distilled into animal stories, the Greek version is found chiefly in stories of humans. Such tales were closer to them and more relevant to their problems. They also fitted nicely into the careers of wandering heroes such as Odysseus, whose stories were a long series of adventures.

The climax of this creative tradition in legend and song came in the latter part of the eighth century bce in the poet Homer and his two great epic poems, the Iliad and the Odyssey. Little is known about Homer himself, or even if a single man named Homer even existed—he is thought to have lived either at Smyrna or on the island of Chios—but his two masterpieces mark the dawn of European Literature. The old Dark Age epics provided Homer with the story material and a metric form which subsequently became the meter for all Greek epic poetry: the dactylic hexameter. Twenty-six centuries later, the English poet Alfred Lord Tennyson called Homer’s meter “the stateliest measure ever molded by the lips of men,” but the rhythms of ancient Greek came not from variations in beat, but variations in the length of syllables—so that Greek dactylic hexameter cannot truly be translated into English. The closet English equivalent in the meter used in Longfellow’s poem Evangeline.

Homer and His Guide.

But the Homeric poems are far more than magnificent poems. The Iliad and Odyssey became the source books for Greek religion, and Homer was considered by later Greeks to be the founder of their history, philosophy, drama, poetry, and science. His themes were an endless source of inspiration to Greek artists and orators. For use today, he is a fascinating source of information on the Greek world as it wa sin his lifetime, and the world as he thought it to be in Mycenaean days.

Although he drew upon the myths that had come down to him through the centuries, Homer added much that was his own. His treatment of the main theme in both poems, as well as their individual episodes, is far more sensitive and perceptive. He took the primitive tales of monsters, cannibals, and desperate risks and enlivened them with a generous and tender vision of life. In earlier versions of the tale, Achilles was no doubt a prodigious warrior who killed his enemy Hector and then mutilated his body as a sign of triumph. But Homer’s Achilles is moved to give the dead body back to Priam. Similarly, there are many old tales of a wanderer who is cast up from the sea and saved by a princess whom he marries. Homer’s wanderer, Odysseus, is also rescued by a charming princess, Nausicaa, but does not marry her. Odysseus has a wife at home, so, instead of marriage, a touching friendship develops between the battered hero and the young girl.

All of Homer’s characters, even those to whom he pays little attention—swineherds, ordinary soldiers, serving women, worthless suitors—are real and convincing people. Each episode abounds in the endless variety of human conduct. Homer himself never obtrudes, hardly ever passes judgment. Everything that he has to say is said through the words and actions of his characters. His patrons probably wanted no more than tales of heroism, but he gave them a whole view of the world, of the gods at their appointed tasks, of men and women pursuing their destinies, of every mood from grim vengeance to uproarious farce, of palaces and gardens, remote islands and rock shores. Behind every story his inspiration is at work, seeing humans as they really are, understanding why they act as they do, portraying them with insight even when they are bad, and when they are good, with warmth and gentle affection.