Perhaps more explicitly than Fitzgerald’s, many of Hemingway’s heroes search for a code—values that give their lives meaning. The artists of modernism turned inward to find the truth since the external world was one of chaos. As a result, truth becomes relativistic, subjective, and personal, lacking absolutes. This fluctuating reality becomes the basis of a modernist interpretation of the universe: the construction of reality based upon an individualistic and provisional interpretation of internal values. Hemingway’s “A Clean, Well-Lighted Place” takes a psychological approach to existence, illustrating a mature “Hemingway hero” who has developed an approach to life that helps him get though the day. 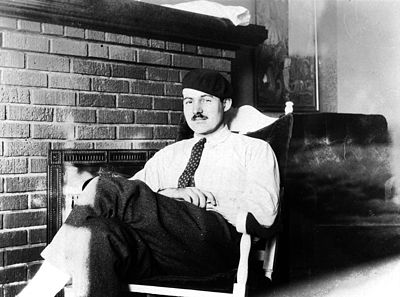 With the absence of an epistemological explanation of the universe, the older waiter in “Place” has developed an ontological position that helps him survive. The darkness for the older waiter and his deaf customer represents nada, or nothing: “It was a nothing that [the old waiter] knew too well” (291). This nothing is the existential awareness of the void—something all too prevalent when one is alone in his autumn years and the lights are off. The younger waiter treats the deaf customer with an unsympathetic derision—a sign of existential innocence.

The older waiter attempts to function as the younger waiter’s reality instructor, without much success. Indeed, implies the younger waiter, what does he know about the void: he has “youth, confidence, and a job”—not to mention a wife to go home to (290). By implication, the older waiter has only a job while the old patron has nothing. The younger waiter will have to learn this difficult lesson on his own since now he only wants sleep and not a lesson: “Stop talking nonsense and lock up” (290). What the naive waiter dismisses as nonsense composes a difficult reality for the older waiter. Yet, in a attempt to survive, he has developed a code comprised of compassion and grace under pressure that offers his life meaning.

Dignity is maintained through cleanliness and composure. Even though the old patron is drunk when he leaves the café, the old waiter remarks to himself: “a very old man walking unsteadily but with dignity” (291). The waiter knows how difficult this dignity is to maintain, so his compassion for the old man shows his empathy and understanding: “Each night I am reluctant to close up because there may be some one who needs the café” (290). He realizes through his own experience with nada the importance of a clean, well-lighted place in the fight against the void.

This position for living represents the mature values of the Hemingway hero. In an effort to maintain human dignity in the face of the wasteland, Hemingway shows compassion and empathy in the absence of religious or epistemological understanding. Why is not as important as how when all that one sees in the dark is nada.