Hawthorne’s Unpardonable Sin, the violation of the “sanctity of the human heart,” is a reflection of Shelley’s Frankenstein. Whether it takes the form of intellectual pride, cold manipulation and observation, or the estrangement of the individual from humanity, the Unpardonable Sin becomes the impetus of the sinner’s suffering and destruction, while at the same time serves as a vehicle for enlightenment. 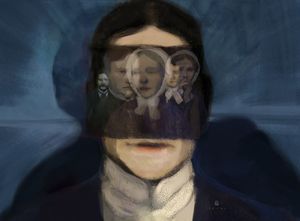 The unnamed artist in “The Prophetic Pictures” is guilty of the Unpardonable Sin. The artist, like Frankenstein, is an overreaching quester who will go to any lengths to further his own understanding of the universe. His talents, learned through separation from his fellow humans, cause harm to those they were supposed to benefit. In his god-like pride, the artist predicts the future in his paintings of Walter and Elinor not realizing that he was creating this future for those he painted. He thought he saw Walter murdering Elinor and painted that into the portraits, thereby setting in motion the efficacious chain of events; the artist’s intellectual pride kept him from seeing the love for Walter in Elinor’s heart. Likewise, Frankenstein’s creation was supposed to bestow the secrets of immortality to humanity, instead it only brought suffering to humanity; Frankenstein could not locate any love for his creation and therefore loathed and pushed it away. Both the artist and Frankenstein wanted to create beauty and benefit, yet neither were in touch with the hearts of those they wished to benefit.

Ethan Brand, in his search for the Unpardonable Sin, became an unpardonable sinner himself. Brand ostracized himself from humanity and his heart became stone, or marble; he became a cold observer of humanity, content in manipulation and annihilation of people like Esther to understand the Unpardonable Sin. Like Frankenstein’s creation, Brand became an outsider looking in, and subsequently became a monster that destroyed life in his own quest for truth. Also like Frankenstein, Brand’s only escape from his own creation, i.e. his inhuman indifference, is death. Both Brand and Frankenstein, in their knowledge, also saw themselves as superior to humanity; thus, their hubris also adds to their transgressions.

The Minister’s black veil is a symbol for the Unpardonable Sin. The veil, in effect, ostracizes the minister from the rest of humanity, instilling fear and and mistrust. Yet, the minister was not the only sinner; he was trying to enlighten everyone that saw him that they are also transgressors. Everyone, to some extent, hides their true selves under a figurative veil, thus separating themselves from each other, becoming cold-hearted, and living as perpetrators and victims of the Unpardonable Sin. These veils run throughout Hawthorne’s work in literal forms, e.g. smoke and mantles, and figurative forms, e.g. intellectual pride and monomania. The latter example can be best applied to Frankenstein; he, in in his monomania to discover the secret of life and death, dons his own veil that keeps him from seeing the love for his family and friends until his success becomes his family’s, and his, destroyer.

Hawthorne’s black veil, like Poe’s Raven and Melville’s white whale, is truly terrifying when it becomes apparent and shatters one’s orderly life. Yet, an acknowledgment of the black veil can help one to realize the Unpardonable Sin before it leads to oblivion. Victor Frankenstein, Ethan Brand, and all of the transgressors realized what was truly the aim of life, i.e. love of thy brothers and sisters, only after it was too late. And, as Mother Rigby points out in “Feathertop,” the world is full of “coxcombs and charlatans—WHO NEVER SEE THEMSELVES FOR WHAT THEY ARE,” and who may end up like any number of Hawthorne’s protagonists or Shelley’s Frankenstein.