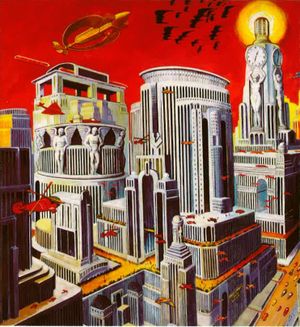 With the beginning of the twentieth century in Russia, strains of naturalism begin to take shape within Russian literature. With this propensity towards deterministic environs, perhaps experiments with new types of fiction that transcend established conventions—a metafiction—is a natural evolutionary step. Zamyatin’s, Babel’s, and Olesha’s works contain naturalistic elements and can all be considered “metafictions” like their predecessor, Bely’s Petersburg.

In Zamyatin’s We, the narrative is actually a journal, which in itself is not an atypical form. However the narrator, or the man from the future, is a mathematician whose life has been based upon logic and rationality, which makes for a totally predictable life. He is the product of his environment—a naturalistic man whose destiny is controlled and directed by his surroundings. Yet, as the “novel” progresses, unanticipated occurrences begin to undermine the narrator’s Apollonian existence and begin to direct his life towards a new course. He must proceed describing events in terms wholly alien to his environment as is the world outside the wall: “I was unable to take a step because under my foot there was not an even plane, but (imagine!) something disgustingly soft, yielding, living, springy, green!ÖI find it difficult to coin new words” (144). In effect, D-503 is experimenting with a language unknown to him and his experience; his writing begins to take a shape beyond his lucid world.

Babel’s narrator in “My First Fee” is also a writer/artist in his own right. He states that “real life is only too eager to resemble a well-devised story” (210). And directly he tells the “story” of his life. His story determines his existence and directs his actions. He, therefore, is the creator of his own life, and his own story solicits his destiny. While it is true that he cannot be a Leo Tolstoy, the narrator is an artist who must have “readers” to affirm his existence and grant him continuous love. By the story’s conclusion, the narrator knows that he shall never die, he has “snatched one more gold piece,” i.e. another fee, “from the hands of love,” or his adoring readers.

The narrator of Babel’s “My First Goose” exemplifies, perhaps to a greater extent, a naturalistic man whose actions are determined by his environment. He, in an effort to remain alive, must commit an act which would make his heart whine and drip misery. His situation—his environment—determined his actions; he has become a brutal, unthinking soldier—just another part of the machine.

Olesha’s Envy is naturalistic in the fact that its characters are also victims of their surroundings. Kavalerov becomes envious because he is forced to view consistently what fate has not made him, i.e. strong and decisive. He is forced by his conditioning to remain forever in the shadows of “bigger men.” This type is also seen in the characters of Ivan Babichev and Anichka Prokopovich, both “wannabes” who have been fated not to have the strength efficacious to the fulfillment of their desires. Their counterparts are also just as much victims of their environs. These characters, seen as strong and larger-than-life to Kavalerov, also must play their roles in society, determined by their society. Babichev is expected to be a boisterous, sausage entrepreneur, and he delivers. And both Makarov and Valia are lionized by the envious and they assume that role deemed by the envious masses. For Olesha, as for Nietzsche in the nineteenth century, their seems to be a class of people who are rulers, those of noble morality, and a class of the envious, or the slave moralists. Yet, Olesha’s groups seem to be determined by their environments.

Both Zamyatin and Olesha share a trepidation for the machine. This apprehension stems from a fear of the out-of-control juggernaut that will eventually crush its creators. Zola, the French naturalist, used the train as a symbol of technology running faster and faster until it surpasses its creator, as did the intellect of man over God in the nineteenth century. Zamyatin’s dystopia of pure rationality in the confines of a machine state, and Olesha’s “Quarter” and Ophelia, ready to systematize and regulate expression and nutrition, are only the beginnings that can only lead to what Zamyatin saw as deadly entropy.