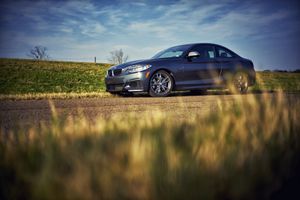 It all started in the wake of VW’s dieselgate, when Giles and I had to decide how we would replace our TDIs. After much consideration and a fair amount of testdrives, I ended up with a 2016 BMW 328i (maybe I’ll write about it later). Giles, too, decided on a BMW, but true to his fastidious nature, he wanted a manual transmission which is nearly impossible to find in a new car. Fortunately, a dude in Austin was selling a 2014 M235i 6-speed — good enough to inspire a roadtrip.

After securing the deal, Giles made plane reservations, and I reserved four days for the trip back from Austin to Macon. That should give us time to linger in Austin for a day and avoid some highways on the drive east—we needed to test the car’s mettle after all. A short flight later (flights are always shorter when you’re in first class), David picked us up in a beautiful M235i. He took us for a drive to the Saltlick, a bit south of town to see what the car could do. I think it’s safe to say Giles was immediately smitten. A handshake and a plate of Texas brisket later, the car had a new owner.

The above images were taken east of Austin along some random lake and pasture. We made another friend, too. As we took photos, a local became curious as to what these two dudes were doing. 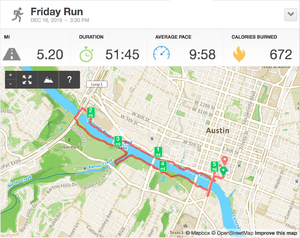 Other highlights of the trip include a run along the Austin riverfront, a visit to a local camera store, and lunch on our way out of town.

I tried to run in Austin during my last visit, but I got rained out. It was in May of 2015, during the Texas déluge that washed half the state into the Gulf of Mexico. Fortunately, this time, the weather cooperated, and while Giles was off enjoying his new BMW, I ran five miles along the Colorado River.

I so wish I lived somewhere with running options like this. Macon could do it, but we prefer to give our dead better parks than the living.

The next morning, I stopped at Toy Joy to purchase a couple of stocking stuffers for Autumn and Henry — this is one of the coolest toy stores I’ve ever been in. They have toys for kids of all ages, including us middle-aged ones.

Finally, we checked out mid-morning for some lunch and a stop by a local camera shop. For lunch, we chose Hopdoddy Burger Bar — a burger place that Autumn and I visited during our trip last year. Not only do they serve one of the best burgers that I have ever had, they had a location in the same shopping center as my new favorite camera shop: Precision Camera (more on that below). I also had a repeat of my new, favorite Austin beer: Zoe Pale Lager.

As expected, the drive was brilliant in the new M235i. We spent the first night in Nacagdoches and dined at Auntie Pasta’s; lunch the next day was at Babalu’s Tacos and Tapas in Jackson, after a brisk stop at the Mississippi River. When I say “brisk,” I mean it in both senses of the word: it was short because it was colder than a cold thing. Still, I managed a couple of photos before my hands stopped responding to commands.

Another highlight was our trip to Austin’s Precision Camera & Video. While neither Giles nor I needed anything, we could not resist checking out this store. Besides, I’ve been reading up on the Leica Q, and I was hoping I could try one out. Fortunately, I could.

I’ve wanted a Leica for years. I was only recently able to afford my first Leica lens, an M-mount Summicron 50mm, that I’ve been using on my Sony A7R, since I don’t have a Leica M. I have no real issues with the Sony cameras, other than they feel like driving a Toyota when I really want to drive, well, a BMW. After reading Craig Mod’s test of the Leica Q (following Giles’ recommendation that I consider a full-frame, fixed lens camera), I was even more eager to give it a shot.

I have three priorities when it comes to a camera:

The first two have been priorities for a while — ones I established when switching from Canon to Sony. The third occurred to me only after using a Leica M9 for a little while. I like the simplicity of design and build of the Leica — it’s not necessarily better, but it has an ineffable qualitative difference. Again, I go back to my car analogy: a BMW is not necessarily better than driving a Honda, but it’s an experience I prefer.

As using a Leica is an experience I prefer, I’m switching to Leica. I’ll begin with a Q, then save for an M.

Thanks again to Giles for a fun trip. Austin, I’ll be back.