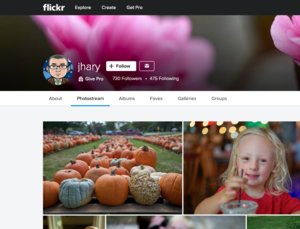 It’s a shame, really. The purchase of Flickr by Smugmug is probably good for Flickr, but I’m not ponying up $50 a year. I’m just not. I thought $25 was steep.

I’ve been on Flickr since 2005—so over a decade. I posted over 4500 photos and had many of them achieve Explore, including my last post on October 6.

I think what I’ll do is slowly re-post much of my photography here. No, this site will not have the community that Flickr did, but at least I’ll have a place to display some of the photos that have meant enough to me to post in the first place.

I don’t think I’ll delete anything there, but the new owners threaten to remove photos in excess of 1000 for those who don’t payup. Enjoy them while you can.

Flickr, it’s been real. It’s good to have known you.