They Should Have Sent a Poet
Or, Nobody’s Hero. Teaching Robert Zemeckis’ Contact in World Literature. 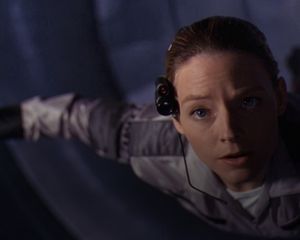 To begin this summer’s section of World Literature I, the class and I brainstormed about just what we mean when we call someone a “hero.” As they suggested ideas, I wrote them on the board, and the whole class discussed each trait. We agreed that the idea of a hero changes with the needs of a culture and his/her literary representation — that while there might be universal characteristics of a hero, each particular, historical culture has its own ideas of what a hero should be. This is called the heroic ideal. For example, the epic hero will not be the same as the tragic hero, but they will, perhaps, share similar characteristics that might seem universal. After of brief discussion, we watched Robert Zemeckis’ 1997 film Contact], a film I’ve discussed in relation to the epic before. I then asked the students to write their first blog entries on Ellie Arroway as a hero. What follows are a few notes from the class as well as my own brief commentary of how Contact’s protagonist meets each. The class’ characteristics of hero are bolded.

One of the first characteristics of a hero that the class suggested is bravery. Indeed, bravery seems to be a universal characteristic of the hero. At on point, Palmer Joss asks Ellie why she wants to be the one to take the machine seat. She cannot answer explicitly, and Palmer tells her that she is the bravest person he has ever met. She relies, “Or the nuttiest.” Ellie’s desire to see what’s on the other side represents her community’s current need to see what’s beyond their world. It’s interesting that Contact came out in 1997, at the height of the X-Files’ assertion that “the truth is out there.”

Part of Ellie’s bravery, and perhaps that of the hero in general, is her altruism. This might also suggest her sacrifice, her pioneering action, her strength, her ability to survive, and her endurance. Indeed, we want our heroes to do what we cannot: these deeds are what make them heroic. Ellie’s endurance, her drive in the face of adversity to pursue what it is she believes in is admirable. Perhaps this also suggests that heroes need to be idealistic and a bit impractical. If Ellie had listened to Drumlin, she would never have heard the signal from Vega. If she let witch hunters like Kitz wear her down, she would invalidate her integrity and be less heroic. When is the last time our culture lionized a sell-out?

In fact, Ellie became a scapegoat in the end during a scene reminiscent of the McCarthy hearings of the 1950s. Senator Kitz tries his best to force Ellie to renounce her testimony that she ever traveled to a distant part of the galaxy. His relentless questioning and citing of tangible fact had Ellie doubting her own experiences by appealing to her reason as a scientist. Since she had no proof of her journey — something science relies upon — Kitz suggests that she imagined the whole thing. Her refusal to be swayed even by hard scientific evidence suggests her strength and endurance, and also shows how she grows as a character.

Heroes must be human; therefore, they must have flaws. Ellie’s flaw was her inability to conceive of answers that can be proven by science. Ellie’s experience with the machine and her journey to Vega teaches her about faith, in belief that transcends the empirical.

Finally, heroes are often mythic and archetypal. Here is where the hero enters the realm of the poet and takes on a life beyond the physical. Myths are stories of profound truths of a culture. Though they might not be “real” in a sense that they actually happened, their significance paradoxically is in the ideals, answers, and guidance that they provide for a culture. Facts, here, become irrelevant, or at least superseded by the story. This is a difficult lesson for the scientist to learn, and is perhaps a lesson for our age.

As our culture takes its first “small moves” into space, we might find that we need our heroes again. When myths of the previous age encounter the realities of the present day, we find ourselves searching for new truths — new stories to help guide us into the next age, perhaps with that notion that the truth is out there. What will we do when we realize that we are not alone in the universe? We will need the heroes and the poets again. The deeds of the hero mean nothing if there’s not a poet to record them. Pay attention to this relationship as you read the selections this semester. Often the poet and the hero are one-in-the-same. This relationship suggests the continued importance of our own literary traditions and the heroic efforts of those that try to keep them alive.