Alexander Pope, a poet and catholic, betrays his neoclassicist longing for a universe that is perfectly ordered, ineffable, and beyond human understanding. His final pronouncement in Essay on Man, insists that man’s reason is no match for God’s design: that while we, perhaps arrogantly, strive for a rational understanding of the universe, are minds are not a match for God’s. We must console ourselves that the universe was designed in the best possible way, by the best of artists, and even though events will often leave us face-down in the mud or staring impotently at heaven, we must realize that it could be no other way. We live in the best of possible worlds. 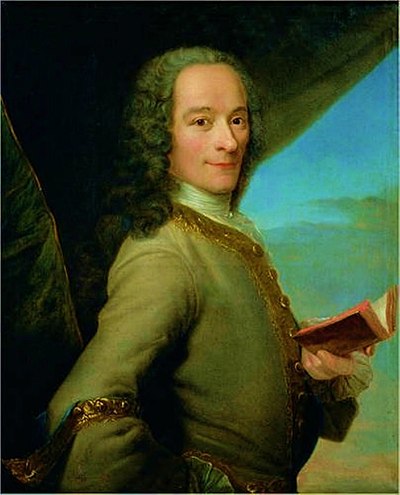 “Bullocks!” shouts Voltaire’s Candide. How could the best of all possible worlds contain the daily atrocities, iniquities, and disasters that this world seems to, at least the world in the eighteenth century. The action of Candide is global, implicating not any one country, but seemingly everywhere. Candide posits three evils to which humans are prone: boredom, vice, and poverty. In taking up Pope’s optimism, suggests Candide, one gives into passivity and moral lethargy: it avoids local problems created by random natural occurrences and human apathy. For, in a perfect universe, nothing can be done, so ultimately nothing matters. As a consequence, all of the characters, including the naively optimistic Candide, pursue their own self-gratification in an effort to gain individual happiness and order. Engaged in these often monomaniacal quests for self-gratification, humans become liars, traitors, rapists, and generally unpleasant to one another in pursuit of desires that often lead only to more suffering.

In Candide’s quest for Cunégonde, representing perhaps the ultimate desire of humanity — the need to love and be loved, he encounters just about every facet of humanity, from the bored aristocrat, to the enslaved philosophy, from the utopian, to the absurd. Candide’s optimism, a product of being raised in a castle under the tutelage of the “all tongue” Pangloss — himself a caricature of Leibniz or even Pope (I mean, who wouldn’t be optimistic and naive spending one’s formative years safely inside a castle. Interestingly enough, the end of Candide has a retreat to another castle-like environment of the garden, but I’m getting ahead of myself), vacillates in his encounters with human degradation and natural disasters, interspersed with hope when he hears about Cunégonde. Through Candide’s determination, even the pessimist Martin eventually concedes that “It’s always a good thing to have hope.”[1] And his hope pays off, but not in the way he expects: Cunégonde is found, but she has lost all of her youthful beauty; thank goodness Voltaire spares us a reason, though it’s easily inferred from the rest of the text. Candide seems to suggest that at least a conditional hope should be maintained to battle despair. When Cacambo and Cunégonde fail to show up in Venice, Candide falls into a despair:

Cunégonde is dead, without a doubt; and nothing remains for me too but death. Oh, it would have been better to stay in the earthly paradise of Eldorado than to return to this accursed Europe. How right you are, my dear Martin; all is but illusion and disaster.[2]

Candide’s dispair never lasts too long, fortunately. Voltaire might have taken a cue from Dante, and added despair as one of those worldly evils. Perhaps, Candide suggests that the world’s vicissitudes cannot leave one in despair too long, but that boredom and poverty are much harder battle against.

The end of Candide reminds me of the end of Eliot’s The Waste Land. The narrator, sitting on the shore with the waste land behind him, muses: “Shall I at least set my lands in order?”[3] echoes Candide’s last words: “we must cultivate our garden.”[4] Eliot’s answer is an individual one — a modernist answer to the devastation of World War I; however, Candide’s appeal is toward a community, as if we can only avoid the evils of the world together. Perhaps Candide remembers his visit to Eldorado and its Edenic qualities, yet at the novel’s end, he doesn’t appear to have the naïveté he did when living in the castle of the Baron. Now, he has seen the world, and he appears to want little else from it. He will be happy, now, with hard work in the company of his friends:

–I know also, said Candide, that we must cultivate our garden.

–You are perfectly right, said Pangloss; for when man was put into the garden of Eden, he was put there ut operaretur eum, so that he would work it; this proves that man was not born to take his ease.

Like Candide, Martin has learned — even if Pangloss has not — of the futility of philosophical speculation, at least as far as allowing it to blind one’s perspective to the point that one’s own experience has no impact on one’s vision of the universe. For, Candide’s experiences have, more frequently than not, run contrary to Pangloss’ perspective, and it seems that Candide finally realizes the futility of this speculation when Cunégonde looses her looks, and he his desire for her. What does a man have left when hard experience crushes his youthful innocence? Candide is content to live away from most of humanity with his small community of fellow sufferers. Yet, it seems that through hard work, one can keep away boredom, poverty, and vice. Even Cunégonde, when no longer the object of desire for every man she meets, learns that she is a great pastry chef: a wonderful addition to the garden.

I don’t think that Voltaire is suggesting that all discussion should necessarily cease. At one point, Candide and Martin seem to have a healthy relationship of debate, even though their views do not agree: “They disputed for fifteen days in a row, and at the end of that time were just as much in agreement as at the beginning. But at least they were talking, they exchanged their ideas, they consoled one another.”[6] This observation could be ironic coming from the experienced narrator, suggesting the utter futility of talktalktalk. However, debate, in this instance, seems to be a rejuvenating and necessary function of humanity. Candide seems to suggest that certain talk brings us together, while some keeps us apart. Indeed, one needs only look at the current state of politics in this country to realize that the democrats and republicans have nothing in common, nothing to say to each other, and foster nothing but ire and mistrust. We prove the untruth of these notions everyday by interacting, talking, and laughing with those that are supposed to be our enemies. Yes, discussion of different ideas can lead to positive growth, only if our interlocutors care enough to listen.

Perhaps a lack of consideration for others in the lust to fulfill individual desires is what fosters evil and allows it to continue to dominate our world. Yes, Pope’s reason and faith lead him to the conclusion that whatever is, is right. However, all we need to do is open our eyes, look around, and shut our mouths for a minute to realize that other perspectives might be equally as valid. Indeed, my perspective is, so it must be right? I can’t help to think about what Hamlet tells Horatio about more things in Heaven and earth that are dreamt of in our philosophy. Candide seems to tell Pope and those other optimists that there might be some facets of the universe that we cannot understand through Reason.