Angels of Nostalgia: An Idea for Writing on “Blink” 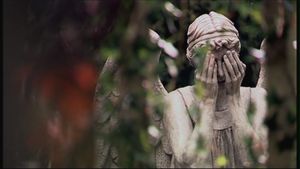 In “Blink,” the Doctor and the episode’s protagonist Sally Sparrow meet the quantum-locked Angels: an alien species that, explains the Doctor, live on potentiality that they rob from their victims.

Angels are metaphors for ubiquitous digital media, especially social media. They rob their victims of their future by transporting them to the past. Isn't this what social media does?