In the desacralized world presented in Émile Zola’s La Bête Humaine the characters are defined by what they want to possess and how they go about getting it. 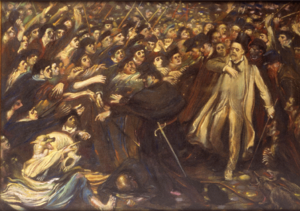 Every character in La Bête Humaine is driven by a desire that seems to make him or her blind to everything else in the world. This desire is immoral because no one cares who dies or is crushed and is symbolized by the image of the train speeding out of control at the end of the novel. Roubaud wants to possess Séverine so much he killed Grandmorin; Séverine wants “to be a woman made for love and [is] unconcerned with anything else,” even even the death of her husband; Jacques Lantier wants to kill for the sake of the satisfaction of an ancient wrong; Flore wants to possess Jacques, the only man she thinks she can love; Misard wants his wife’s 1000 francs so badly he’ll kill her.

Aside from these monomaniacal desires, there are also concerns of society and money that are present in the main characters and in the minor ones as well. M. Camy-Lamotte is only interested in keeping the government intact (i.e. free from scandal) whatever the circumstances; M. Denizet is only worried about promotion; Berthe and M. de Lachesnaye are worried about Grandmorin’s estate and what they are entitled to receive.

Everyone of these goals, and even more not mentioned, are pursued with relentlessness and indifference as to what may happen to others along the way. We are shown that almost every character is willing to kill to achieve the object of their desires. Flore causes fifteen deaths when she wrecks Lison trying to kill Jacques, and especially Séverine, because she could not possess Jacques and she could not bear the idea of their having each other. When she finds she has failed, she kills herself—not because she has caused the deaths of fifteen innocents, but because she has not succeeded in killing Jacques and Séverine. Misard will do anything for Phasie’s 1000 francs. He killed her and left us with the idea that the house will soon be dismantled in his futile search.

Whether or not the naturalistic argument that “men’s lives and actions are determined by their environment and heredity” is true, Zola paints a disturbing portrait of humanity in La Bête Humaine. Even in the puppy-like devotion of Cabuche there is still that underlying violence in him that is easily triggered and herd to control. To be determined like a run-away train towards an unknown horizon is a feeling that even the best of us have at times.