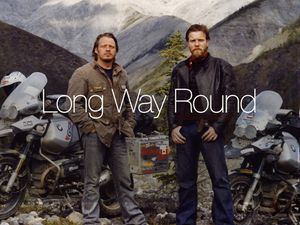 I finished watching “Long Way Round” this evening. Though I wish they had spent some more time highlighting the U.S., the seven episode series was very well done. Ewan McGregor and Charley Boorman rode 20,000 miles from London to New York City, though Mongolia and Siberia on a pair of BMW R 1150 GS motorcycles. What a trip. Ewan made the comment in the last episode that he hopes their trip inspires people to try something that they think might be impossible, to silence the doubts to safety that such an ostensibly foolish trip might bring to most of us. Well, these guys were well funded, but their adventure certainly makes me want to ride. I’m thinking about Alaska’s Dalton Highway up to Deadhorse on the Arctic Ocean featured in this month’s Rider. Yes, I will do that one day. Thanks for the inspiration, Ewan and Charley, not that I needed it to ride.