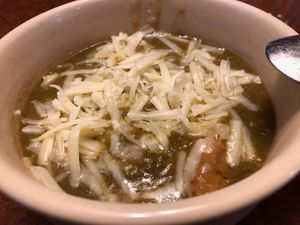 This chili is based on a recipe from the Food Network, I think. I have made it a couple of times, and it’s darn good — with the perfect amount of heat.

In a medium saucepan over medium heat, add 1/2 cup of olive oil. Stir in the onion, garlic, serrano and jalapeno peppers and cook until soft. Remove from heat and set aside.

Place the pork shoulder in a large heavy bottomed pot, coated with oil, over medium heat and sear until well browned on all sides. Deglaze with the chicken broth, and then add sauteed onions and peppers. Turn heat to low, cover and let it simmer for 10 minutes.

Meanwhile, place the Anaheim peppers on a sheet pan.

Peel the outer paper skins off the tomatillos, then coat with olive oil and place on another sheet pan. Place both pans in the preheated oven and roast until the peppers are nicely charred and the tomatillos are soft, about 20 minutes.

Remove pans from the oven and place the peppers in a plastic bag to let them steam for 5 minutes.

Peel and seed peppers, and then puree them with the tomatillos in a food processor. Add the puree to the pork mixture, stir, and then let simmer on low heat.

In a small saute pan, mix 1/2 cup olive oil with the corn flour, stirring over low heat for 2 minutes to make a masa roux.

Let the chili mixture simmer for approximately 1 1/2 to 2 hours on medium-low heat, or until pork is nice and tender. Then stir in masa roux and simmer for 10 more minutes.

Retrieved from "https://grlucas.net/index.php?title=Chili_Verde&oldid=2953"
Category:
This page was last edited on 18 March 2019, at 11:22.
Privacy policy
About Gerald R. Lucas
Disclaimers