Operatic & metrical tragoidos means “goat-song”; the nature of Greek tragedy is political, and they usually address politics directly. General characteristics of the tragedy include: 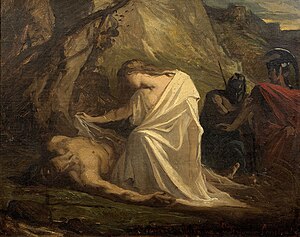 Some Views on Tragedy

A tragedy must not be a spectacle of a perfectly good man brought from prosperity to adversity. For this merely shocks us. Nor, of course must it be that of a bad man passing from adversity to prosperity; for that is not tragedy at all, but the perversion of tragedy, and revolts the moral sense. Nor again, should it exhibit the downfall of an utter villain: since pity is aroused by undeserved misfortunes, terror by misfortunes befalling men like ourselves. There remains, then, as the only proper subject for tragedy, the spectacle of a man not absolutely or eminently good or wise, who is brought to disaster not by sheer depravity, but by some error or frailty. Lastly, the man must be highly renowned and prosperous—an Oedipus, a Thyestes, or some other illustrious person.[1]

First, the hero. The Shakespearean tragic hero, as everyone knows, is an overstater. His individual accent will vary with his personality, but there is always a residue of hyperbole. This, it would seem, is for Shakespeare the authentic tragic music, mark of a world where a man’s reach must always exceed his grasp and everything costs not less than everything. [. . .] I think most of us believe that tragic drama is in one way or other a record of man’s affair with transcendence.[2]

Tragedy should be used to describe the situation in which a divided human being faces basic conflicts, perhaps rationally insolvable, of obligations and passion; makes choices, for good or for evil; errs knowingly or involuntarily; accepts consequences; comes to a new, larger awareness; suffers or dies, yet with a larger wisdom.[3]

— R. B. Heilman, Tragedy and Melodrama

A tragedy is a story of human actions producing exceptional calamity leading to the death of a man of high estate.[4]

In almost all [of Shakespeare’s] tragic heroes we observe a marked one-sidedness, a predisposition in some particular direction, a total incapacity, in certain circumstances, of resisting the force which draws in this direction; a fatal tendency to identify the whole being with one interest, object, passion, or habit of mind. This it would seem, is, for Shakespeare, the fundamental tragic trait… It is a fatal gift, but it comes with it a touch of greatness, and when there is joined to it nobility of mind, or genius, or immense force, we realize the full power and reach of the soul and the conflict in which it engages acquires that magnitude which stirs not only sympathy and pity, but admiration, terror, and awe.[5]

The central feeling [in a Shakespearean tragedy] is one of waste.[6]

[At the end of a Shakespearean tragedy] we remain confronted with a world travailing for perfection, but bringing to birth, together with glorious good, evil which it is able to overcome or by self-torture and self-waste. And this fact or appearance is tragedy.[7]

— A. C. Bradley, The Substance of Shakespearean Tragedy

In the sense of having been initiated by the hero himself, the tale always reveals what has been called his “tragic flaw,” a failing that is not peculiar to grand or elevated characters. Nor is it necessarily a weakness. The flaw, or crack in the character, is really nothing—and need be nothing—but his inherent unwillingness to remain passive in the face of what he conceives to be a challenge to his dignity, his image of his rightful status. Only the passive, only those who accept their lot without active retaliation, are “flawless.” Most of us are in that category.[8]

Thus the equilibrium of tragedy consists in a balancing of Terror with Pride. On the one hand, we are impelled to withdraw from the spectacle, to try to forget the revelation of evil methodized; on the other, we are aroused to withstand destiny, to strive to meet it with the fortitude and the clear eyes of the tragic figure. This feeling of Pride comes into full existence when the hero knows his fate and contemplates it: it is essentially distinct from the hubris which he may display, but which we cannot share in, before his eyes are opened.[9]

— Clifford Leech, “The Implications of Tragedy”

Suffering beyond solace, beyond any moral palliation, and suffering because of human greatness which is great because [it is] great in passion: that, above everything else, is central to Shakespeare’s conception of tragedy.[10] . . . But this is not the whole picture. Not only is the vulnerability to fortune of human distinction Shakespeare’s theme; its special liability to intense suffering and destruction. He also emphasizes the precariousness of its very quality of greatness.[11]

Courage and inevitable defeat: when we confront the great literature of tragedy from our everyday world, it is perhaps these two qualities that strike us most forcible, for the first in any society is rare and the second is a prospect most men find intolerable. Without courage or endurance, the exceptional action or commitment which characterize tragedy would not be undertaken or sustained; without defeat, it would not be placed in the perspective of the ordinary world. … Courage without an overpowering challenge can be mere bravado or foolishness (and thus comic). Defeat without a great attempt can be mere pathos.[12]

On a level quite above the immediate values of the play [Antony and Cleopatra] feeling is the quality most affirmed by it, indeed by all the tragedies. For this reason, Aristotelian categories seem to me quite irrelevant to Shakespeare—and even to Greek tragedy. A fall, a flaw, a recognition: the pattern must be stretched into a one-size-fits-all dimension to fit the plays.[13]

Discovery or anagnorisis which comes at the end of the tragic plot is not simply the knowledge by the hero of what has happened to him, . . . but the recognition of the determined shape of the life he has created for himself, with an implicit comparison to the uncreated potential life he has forsaken.[14]

In every primitive tribe we find the shaman in the center of society, and is easy to show that he is either a neurotic or psychotic, or at least that his art is based on the same mechanisms as a neurosis or psychosis. The shaman make both visible and public the systems of symbolic fantasy that are present in the psyche of every adult member of society. They are the leaders in an infantile game and the lightening conductors of common anxiety. They fight the demons so that others can hunt prey and in general fight reality.[15]

Him that stood in great prosperity
And is yfallen out in high degree.

Retrieved from "https://grlucas.net/index.php?title=Tragedy&oldid=12844"
Categories:
This page was last edited on 30 September 2020, at 07:51.
Privacy policy
About Gerald R. Lucas
Disclaimers