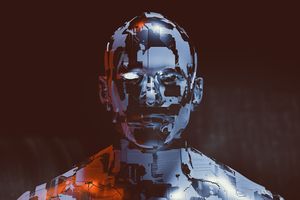 Much postmodern criticism seeks to locate the subject in areas of dislocation. That is, any single ideological construction or essential position is inadequate to describe, define, and locate the postmodern subject. These singular ideologies, artifacts of the Enlightenment, have become ossified remnants of universals that were never truly universal: the ideologies and truths of the tyrannical patriarchy are social, political, economic, and religious institutions. The questioning of the very foundations of these oppressive and marginalizing ideologies may be likened to acts of blasphemy against the orthodoxy—a mythical position that questions the very mythology from which it springs: that of the satanic adversary.

This hypertext examines a secularized notion of blasphemy, how it is possible to blaspheme in a society that lacks absolute beliefs, and how that act of blaspheming effects the blasphemer’s body/embodiment. I theorize how the religious notion of blasphemy has been transferred to the secular in contemporary acts of resistance to any monolithic ideology that seeks to control, define, and embody any universal order. The notion of the posthuman body, an embodied amalgam of heterogeneous influences, continuously constructs and deconstructs identity to the point where any single notion or belief becomes not only an erroneous conception of identity, but becomes destructive and oppressive in its continuously growing monomania. The posthuman body is able to function in a world of polyphony and divergent technologies: the body becomes a place of dialectic and play, where the heteroglossia of technology and ideologies can work, synthesize, and produce the figuration that is capable of functioning meaningfully in a fragmented world of conflicting verses; the notion of blasphemy, then, becomes the very medicine for everyday life.

Retrieved from "https://grlucas.net/index.php?title=Posthuman_Figuration&oldid=8338"
Categories:
This page was last edited on 20 February 2020, at 06:55.
Privacy policy
About Gerald R. Lucas
Disclaimers