From my astronomy class last semester, I used existing constellations and made a new mythology. It earned me 50 points, thanks to Michael Moorcock. 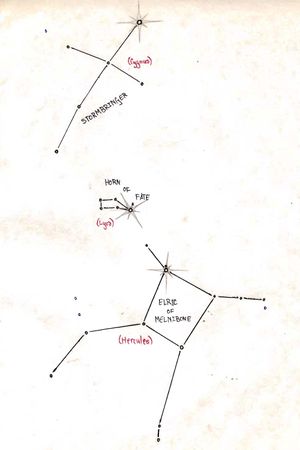 Elric of Melniboné was an albino, and he was also the emperor of Melniboné. One day Elric neglected his duties as emperor and left Immyrr, Melnibone's capital city, and sought adventure.

Elric had a black sword called Stormbringer. He depended on the blade to give him strength. Being an albino, Elric was very weak, in battle Stormbringer would eat the souls of his opponents and give energy to Elric. The mare they killed the more powerful Elric would become. This was evil, and so was Stormbringer, and Elric knew that one day he would die by his own blade.

Elric and Stormbringer had many adventures, but the world was dying. The gods gave Elric the Horn of Fate. blowing the Horn would end the world. Elric blew the Horn and as he did Stormbringer struck. Elric’s life, as well as the life of the world, was ended as violently as he had ended so many others.

The gods put that final chapter in the hero Elric’s life in the stars for everyone of the new world to see and be warned!