A dominant theme in Chekhov’s play of anti-climaxes is that people create and act out their own fictions. Why is it difficult or impossible to see the fictions we create about our own lives when seeing others’ fictions is often so evident? (E.g., Liubóv and Trofímov in Act 3, p. 376–77). What is the relation of truth to reality or facts? 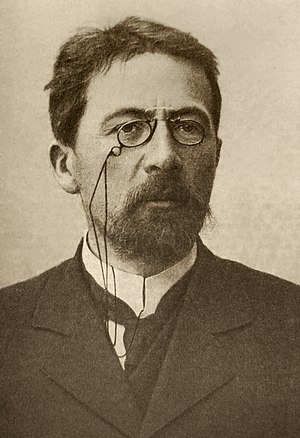 Lopákhin—pragmatist—son of a serf, but now a wealthy businessman

Firs—remnant of the old days: refused to be freed at first in 1861

Pischik—landowner with no money, yet he’s obsessed with it.

Anton Chekhov on the Theatre, Theatricality, and TCO

On Sarah Bernhardt and Company:

Pitcher outlines some methods adopted by the Moscow Art Theatre based on Chekhov’s philosophy:

About The Cherry Orchard:

Chekhov complained in April 1904 that his play was being advertised as a drama rather than as a comedy. He accused Danchenko and Stanislavsky of finding things in the play that were not there: “They both haven’t read my play attentively even once,” he remarked. “It’s no longer my play. Except for two or three parts, nothing in it is mine. I describe ordinary life, not despondency. They make me into a crybaby or a bore. This is beginning to make me angry.”[13]