While composed nearly five thousand years ago (2500–1500 BCE), Gilgamesh is as familiar in its thematic concerns as it is alien in many of its cultural practices. Many of these themes emerge from a lost mythological tradition and a culture that is equally non-extant, the bonds of friendship, fear of death, and the quest for worldly renown still strike chords with contemporary life. 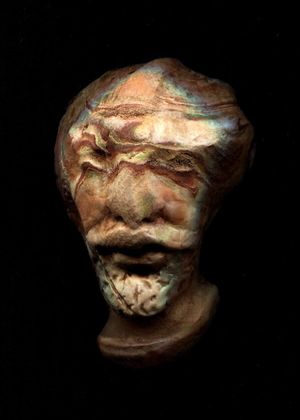 Gilgamesh is a primary epic, composed over a thousand years by cultural stories of the legendary king, Gilgamesh, who is thought to have historically ruled Uruk circa 2700 BCE. The oral stories were probably assembled by a poet and cast into the narrative form of the epic between 2000 and 1600 BCE and finally written on clay tablets in cuneiform during the reign of Assurbanipol in 668-627 BCE.

The epic takes as its primary concern Gilgamesh’s wisdom that he acquires during his journeys and the monuments that he constructs upon his return. Like the Homeric epics, Gilgamesh begins in medias res during the rule of a wild king, two-thirds god and one-third man. While Gilgamesh is strong and an obvious stud — at least in his own mind, he is cruel and naive and needs to discover what it means to be human if he is to become a good ruler and father.

His first lesson is a major theme of the epic: the importance of friendship with the wild man Enkidu, more of an animal than man. Like all good, lasting friendships (at least those that I have had), Gilgamesh and Enkidu first attempt to kill each other when the latter comes to Uruk. Fortunately, they do not, yet Gilgamesh does get the slight upper-hand, and they become great friends. Indeed, while there is an implicit suggestion of Gilgamesh’s superiority over Enkidu, I have also noticed that in most friendships, there is one who is dominant, choosing adventures, making decisions, and directing the ultimate course of the friendship. Gilgamesh, since he is the epic hero, seems to take this role, perhaps also suggesting the superiority of the cultured and civilized to the animal, or natural. This motif becomes even more apparent in their first adventure.

Now that we are friends, we have to party. Enkidu soon gets bored in Uruk — “I am oppressed by idleness”[2] — and Gilgamesh suggests they go get medieval on some evil: Humbaba. This feat represents another prevalent theme in the epic, the quest for world renown, and will allow Gilgamesh to become a real hero by having stories told about his manly exploits:

While Humbaba lives in the Country of the Living, seemingly quite far from Uruk, and is apparently not an immediate threat to Gilgamesh’s people, this endeavor might seem a bit dubious. Perhaps this is a commentary on what men will do when they are bored: let’s go kill something. When we are at peace, we long for war? Humbaba might also represent a “holdfast,” something that while alive or existing — whether an idea or an actual threat — restricts a culture from developing beyond a certain point. Many such holdfasts pop up in western literature, cf. the dragon in Beowulf for one.

While Gilgamesh and Enkidu are successful in killing Humbaba — through episodes of fainting and friendly gibes — its death suggests more of an ambiguity in their success, as if something precious has been slain all for the pride of man (and I do mean man, here). Notice that when Humbaba is killed, the heroes begin cutting down trees: “They attacked the cedars . . . [and] cleared their roots as far as the banks of the Euphrates.”[3] Like Enkidu’s education through the harlot Shamhat, this victory suggests that while the heroes accomplished a heroic feat, something is irrevocably lost because of their endeavor. Through Shamhat, Enkidu forever loses his innocence, but what is lost in the killing of Humbaba is a bit more ambiguous. Perhaps this is an ecological statement about clearing rain forests millennia before we knew what effect that practice would have. 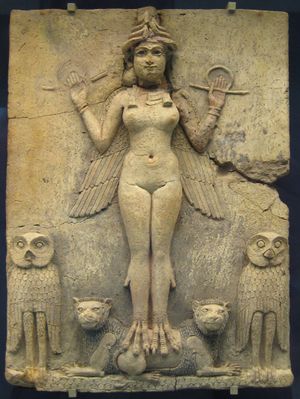 Ishtar, a deity that serves several functions in Sumerian culture.

The ambiguity continues in the gods’ reaction to the death of Humbaba and the felling of the cedars: Enkidu must die. OK, maybe it has more to do with Gilgamesh’s arrogant dismissal of Ishtar, but regardless, the Bull of Heaven is sent to punish the heroes and Uruk. Even though the bull is defeated, Enkidu must die which precipitates Gilgamesh’s search for immortality — an escape from death. Notice that while Enkidu lays dying that he curses the city (civilization), the harlot (women that led to the destruction of his innocence), and the trapper (who precipitated the education of Enkidu). Enkidu’s curses further call into question the necessity of civilization and heroic quests: perhaps fame is not worth death.

After Enkidu’s death, Gilgamesh rips his clothes from his body and dons animal skins, symbolic of his repudiation of civilization — that which caused the death of his friend. Gilgamesh’s subsequent journey is a psychological descent into his own psyche to discover his own meaning in a life that must end in death. In this, the quest for immortality may be seen as the dominant theme of the second half of the epic. His journey is pretty pathetic as far as epic journeys go: full of tantrums and failed tasks, Gilgamesh seems to return to Uruk empty-handed. Yet, he brings the story of his travel and carves it on the bricks that make up the foundation of Uruk, suggesting that civilization is ultimately built on stories: the written text is the key to progress, friendship, and immortality. Gilgamesh, then, becomes a scapegoat: he journeyed to meet Utnapishtim so his people did not have to. Though his journeys proved ostensibly unsuccessful, he returned humanized, ready to accept his place in the world and finally death when it would come.

Gilgamesh leaves us with its moral: Do not abuse power, “deal justly with your servants in the palace, deal justly before the face of the Sun.”[4] Gilgamesh is both “the darkness and the light of mankind” in that he brought suffering, but ultimately brought life to his people in the form of the story. What directions for life are contained within the epic? How many of these myths do we still live with today? These stories represent the good and the bad of humanity. What do we ultimately think of the stories, myths, codes for life that Gilgamesh ultimately passes on?

Retrieved from "https://grlucas.net/index.php?title=Introduction_to_Gilgamesh&oldid=12294"
Categories:
This page was last edited on 28 August 2020, at 14:44.
Privacy policy
About Gerald R. Lucas
Disclaimers